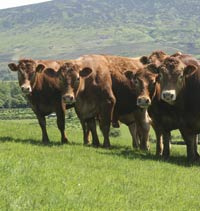 A Lancashire family who took the tenancy of 1214ha (3000 acres) just eight years ago believes the “tide may be turning” for the hill farming sector, but says a re-alignment of support payments is now needed.

There has been a sustained demand for store and breeding stock in recent months and it’s highlighting the value of the uplands as a vital link in the food chain, says Robert Ayrton.

“What’s needed now is a system of support to achieve a fair balance between livestock production and preserving the upland environment.”

Robert farms with his wife Christine and sons Luke and Daniel at Ouzel Thorn in the heart of the Trough of Bowland on the Duke of Westminster’s Abbeystead Estate.

The family runs 1100 Swaledale ewes and about 55 sucklers on some of the highest fell land in the county heading towards 2000ft and with 60in of rainfall. The farm has 202ha (500 acres) of in-bye land with about 141ha (350 acres) under a stewardship scheme including some land designated SSSI.

While appreciating the need to conserve the uplands – and recognising the financial importance of green payments to the farm’s viability – the Ayrtons say current stock values are proving the importance of hill farming to the entire livestock sector.

“Let’s hope the next government gets the message that hill farming is the first point of production for our breeding and store stock. We’ve had years when environmental issues have been a priority for the uplands, but now it’s time to consider their role in producing food.

“These farms are critical to the whole structure of lowland prime stock production and need to be given the recognition they deserve,” says Mr Ayrton.

As in many other upland areas sheep numbers have been reduced on the vast expanses of heather moor in the Trough of Bowland to meet environmental scheme, but some farmers are now being asked to re-introduce sheep to certain areas to redress the environmental balance.

The sheep flocks that graze these fells have been beleaguered by ticks for more than 50 years. An extensive vaccination programme supported by the Duke of Westminster has brought widespread protection to thousands of fell sheep on the estate, but now there’s a need to bring “protected” sheep back on to selected areas of heather moor.

While vaccination against ticks has eliminated lamb losses through louping-ill at Ouzel Thorn, tick infestation is still causing high mortality among grouse chicks and the chicks of other ground nesting birds.

“Our hoggs are vaccinated twice against ticks and that’s backed up with dipping and pour-on treatments across the whole flock. Because sheep are protected we’re now being asked to put more sheep back on to tick infested areas of the fell to attract ticks on to protected sheep and thereby reduce the risk to the chicks of ground nesting birds.

This proves the importance of a more balanced approach to the way we farm in the hills. Taking stock off this land not only disrupts the volume of stock available to lowland producers, but in the case of the tick population it’s making things worse for the birds these schemes are trying to protect, says Luke Ayrton.

While there’s been a trend for some north country upland flocks to put more horned ewes to terminal sires rather than produce Mule gimmers, the Ayrtons believe that producing Mule breeding sheep still offers the best return.

The farm carries three fell flocks. About 700 Swaledales are bred pure with 300 ewes put to Bluefaced Leicester tups produced in the family’s own pedigree flock. A small number of Swaledales are run with Cheviot tups.

Swaledale ewes are wintered on the fell until early February with no additional feed. After scanning most are returned to the fell until three weeks before lambing in late March. Swaledale wether lambs are traditionally sold as stores, but last year most were sent away on tack between October and Christmas and sold finished straight off grass at about 33kg liveweight.

But just how high will Mule gimmer lamb prices go this autumn? That’s a question that the Ayrtons are hesitant to answer.

Who knows? Everyone’s got their own idea about what price breeding sheep will be, but one thing is certain, they’ve got to reflect the price of prime lambs and even cast ewes. Sheep production has contracted in recent years, but I think we’ve reached the tipping point and it’s proving just how important the hill farming sector is to the whole sheep industry, says Robert Ayrton.

Producing stock of the highest quality – both cattle and sheep – remains the driving force behind this family business. The farm runs about 100 head of cattle based on Limousin-cross and British Blue-cross sucklers, but a recently purchased bunch of pedigree Limousin females has been introduced as the foundation of a new venture.