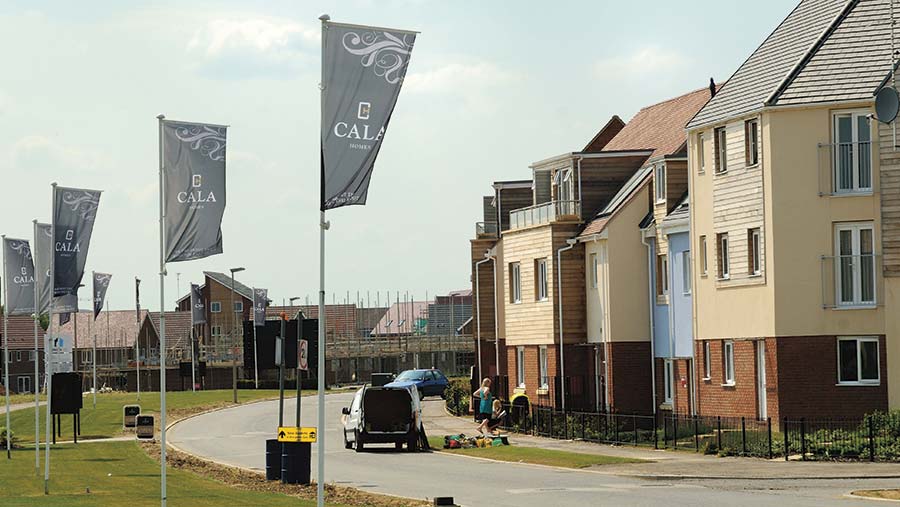 Farmers risk losing potential land value to the government-backed boom in construction projects unless they take a more active role in the development process, planning experts have warned.

Both the CLA and land agents Robinson and Hall made warnings as a government drive to meet ambitious construction targets meant more landowners would face Compulsory Purchase Orders (CPO).

There are already more than 700 major national infrastructure projects planned or under construction and spending on transport links and home building is predicted to hit £600bn over the next 10 years.

CLA chief surveyor Andrew Shirley said Mr Hammond’s speech showed while planning legislation had not been changed in the budget, the political stance had shifted.

The Conservatives included increased housebuilding in their election manifesto and they are now piling the pressure on local authorities and developers to meet targets, Mr Shirley said.

To make faster progress, the government has said it will hand CPO powers to a new body – Homes England. The move is in response to calls from developers, who say complicated planning negotiations at local level are adding cost and causing hold-ups.

The government has faced further calls from the influential National Infrastructure Commission – a government advisory body made up of independent experts.

The commission, chaired by Labour peer Andrew Adonis, said the Treasury should be willing to devolve new powers from Whitehall to local councils to acquire more land, more quickly at the lowest cost.

Mr Shirley said that the developing situation was a growing concern as farmers faced losing swathes of land at no more than a calculated agricultural value.

But he said the CPO system had flaws, which could allow landowners to take a bigger share of the value.

“The government is pushing for greater compulsory purchase powers because taking land appears to be the most straightforward way to acquire land for construction. Yet lengthy inquiries and wrangles over property valuations mean it can be far slower than the planning system,” he said.

Time can be spent as surveyors work with landowners to fight a purchase order and argue for so-called hope value – a higher value reflecting the development potential of the land.

As well as taking time, the process may ultimately be unsuccessful for the landowner, Mr Shirley pointed out.

Instead, he and Robinson & Hall are pressing farmers to consider a more commercial approach and offer under-pressure authorities a more rapid solution.

Partners in Robinson & Hall LLP, Andrew Jenkinson and David Jones, are based in an area identified for a major development known as the Oxford-Cambridge Arc, so the situation faced by landowners in their area is acute.

The Oxford-Cambridge Arc’s scale and speed of construction is immense. While Milton Keynes which sits in part of the proposed area has 98,000 houses and took 50 years to build, the new development of one million houses is 10 times the size and will be constructed in under 35 years.

The one million houses, constructed as new towns and villages, will be connected by a major road route referred to as an expressway and the East-West rail line.

Currently there are 1.4m houses, accommodating 3.2 million people in the designated area so an additional one million homes is an increase of about 70% across four counties: Oxfordshire, Bedfordshire, Cambridgeshire, Buckinghamshire.

“The Oxford-Cambridge Arc is typical of what the government is doing all over the UK – these developments are coming fast,” Mr Jenkinson said.

“With new CPO powers for Homes England, the government is signalling that if the market doesn’t deliver it has the tools to take land at a low cost.”

He argued that a better way forward for all parties could be to form a development group with neighbouring businesses and devise a deliverable plan that influences where and how a construction project is implemented.

Research – gain as much information about the project as possible

Get advice – talk to agent, legal, policy and planning experts

“A viable commercial proposition makes it much more difficult for an authority to impose a CPO which has to be proved to be in the public interest.

“As the planning application system can be quicker and cheaper than a protracted tussle with surveyors it would be hard for an authority to argue a CPO is better value for the public,” Mr Jenkinson said.

David Jones added that the worst-case scenarios would be landowners who opted for a passive position.

“If you bury your head in the sand you may face a CPO for the initial transport route then find land adjacent is taken for a new town, ending up with nothing more than ag values to fund a move to a new area.

“A decision to fight may end up with a long campaign for compensation and you still only end up with agricultural value and a development on your doorstep.

“But a commercial proposition, that can give the authority the rapid solution they are being pressed for, may allow you to influence where the development is sited and to maximise the value of the land you commit,” Mr Jones said.

However, he warned that farmers would have to think big to persuade authorities to accept their proposition.

“At these focal points, groups offering a few dozen houses may not sway the authority but may be more likely to be granted in other areas within the Arc.

“The groups that succeed in gaining the biggest value for their land will probably need to propose hundreds of houses and work in league with a developer along with a host of other professional services to create a realistic proposal,” Mr Jones said.