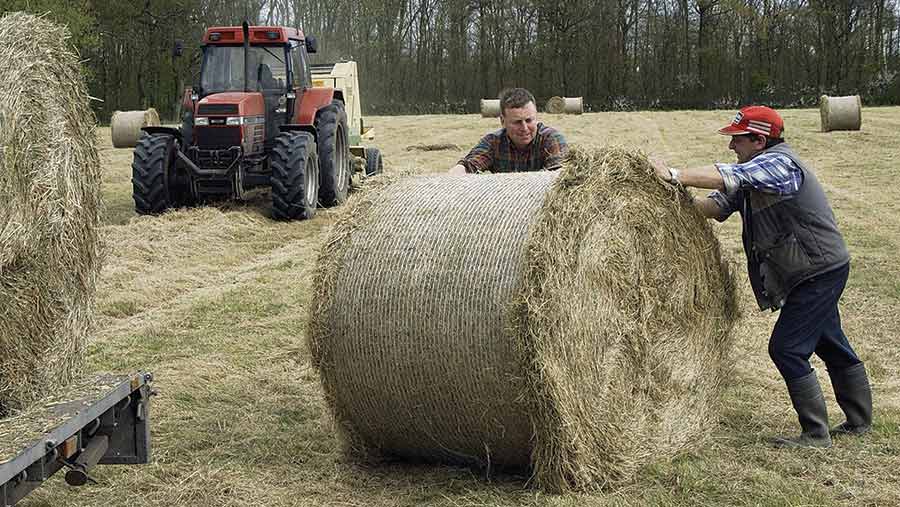 To gauge the extent of collaboration it quizzed more than 1,000 of its members on the issue.

One of the most striking findings from the responses was 88% of farmers claim to collaborate in a low-key way – for example, through the use of contractors, according to Susan Twining, CLA chief land use policy adviser.

“Most respondents describe their collaboration arrangement as informal which could explain why this it has not been captured previously in industry data analysis,” she said.

See the case studies below to find out how two farming businesses have gone about setting up a collaboration and how it benefited them.

A 50:50 financial collaboration between tenant and estate owner has set a Cheshire farm on course to be one of the most efficient and environmentally friendly dairy herds in the UK.

Crewe Hall Farm forms part of the 730ha Barnston Estate near Chester and is managed by tenant Evan Jones and his family.

“I had realised we needed to make the farm business more resilient because of fluctuating milk prices – I was also concerned about long-term labour dependency and production costs,” he explains.

The basis of the plan was formed after Mr Jones took a fact-finding tour of larger-scale herds in America.

“It was clear that larger herds, in carefully designed units, could cut costs per cow, improve output and reduce labour use.”

“We also saw the benefits of sand for bedding and state-of-the-art technology in the parlour to monitor cow performance and health.”

With this wish list he knew the investment needed would be beyond the scope of the Jones’ family farming partnership on its own.

“We asked Edward if he would collaborate on the investment with our input to fund the increase in cow numbers and to pay for the rotary parlour.

“We got a positive response – a lot of landlords would have shied away from it. I can’t emphasise enough how important it has been to get this support,” said Mr Jones.

But Edward Barnston said the investment made good sense.

“Evan is a fifth-generation farmer and hugely capable. For a landlord that is a huge asset, worth investing in,” Mr Barnston said.

“We also agreed to take on the lion’s share of the infrastructure and are looking at a seven-figure sum,” he added.

Initial plans to install a large-scale anaerobic digester (AD) plant were discarded in favour of a 130kW unit fed by 20,000t of slurry produced each year.

About 3,000 litres of hot water will be produced at 90C for washing and all the bedding sand will be sterilised and recycled using a cleaning unit.

Total carbon emissions from the farm will be lower, even with a doubling of the herd.

It is hoped the farm’s green credentials will also help with long-term product marketing, potentially using a low carbon emission label to attract a premium price.

“Crucially by creating our own feed, fuel and fertiliser the farm has reduced input volatility while producing 11m litres of milk a year,” Mr Barnston says.

‘You will always get back what you have put in’

A give-and-take attitude founded on trust underpins a practical farming collaboration between the Lowther Estate in Cumbria and its tenant farms.

The estate on the eastern edge of the Lake District includes Lowther Park Farms a 1,300ha enterprise of in-hand farming.

“Because we have the land we can offer them feed, grazing, straw and housing. These are all sold from the estate to the farms at the market rate and without costly haulage fees,” Mr Bliss said.

“The tenants benefit through dealing with known partners under long-standing arrangements, reducing time spent in the office.”

Mr Bliss explained the farmers are in regular contact and discuss their upcoming needs for their farms as the season progresses.

“We have the land so we will plant extra acreages of cereal for wholecrop silage and straw if a tenant requests it,” he said.

The crops are sold off the field at the market price but the final amount paid by the individual farm differs according to other factors.

“One particular tenant has a straw-for-muck deal – so we supply the bedding and take back the farmyard manure in exchange,” Mr Bliss said.

“It is the same kind of flexible arrangement with baling, building rental, grain drying or grazing rights and we may take labour or borrow equipment at peak times in lieu of payment,” Mr Bliss added.

The family is on a long FBT and has just agreed the tenancy will pass on to Mr Bland’s son in the future.

“Working with the estate gives us a lot of confidence and security. It is all give and take and there is a great deal of trust between all parties that the final costs and contributions are shared out fairly.

“We graze some of their fields, buy their straw and rear 80-100 youngstock in some of their buildings on a bed and breakfast-style arrangement.”

Because Abbot Lodge is a small unit the business also buys in wholecrop from the estate.

“I look at what I need and ask for a certain acreage to be drilled and agree a price,” Mr Bland said.

The upfront price is then adjusted to take into account the farm which supplies slurry, muck and, at peak times, labour in return.

A relation of Mr Bland also farms on the estate and between the two units they have invested in forage-harvesting equipment and machinery.

“The labour and equipment we supply is then recognised in the amount we pay for the crops.”

Mr Bland said the collaboration depends on a different mindset or it would not work.

“You might be focusing on what you are doing but you may have to drop everything and work to the overall priority for the good of the whole if there is an urgent need.

“Ultimately, you have to remember that it is for our good as well if the crop or straw comes off the field in good condition and that you will always get back what you have put in,” he added.

“Collaboration could offer alternative income sources and help build the resilience businesses needed to withstand the periodic shocks of the global marketplace,” he said.

“Joining forces can be equally valuable as we prepare for the uncertainties around trade and farm support post Brexit.

“Our businesses face challenges ahead and we may need to farm differently, but we can also find new opportunities to become more productive, profitable and sustainable. Making better use of the land we farm by working more closely with our neighbours and supply chains is one way to do this.

“However, entering into a collaboration can feel like a leap of faith. The relationship requires trust and understanding and must work for all. Using a contract to set out clear objectives and standards should be considered but informal arrangements can equally have great value and should not be dismissed.”

Mr Breitmeyer wants to see government investment to help set up the formal arrangements and fund R&D for the technologies and systems that will make such ventures effective.

“Key to this will be the commitment to a universal service obligation of at least 10mbps for broadband so we farmers can use these valuable technologies.