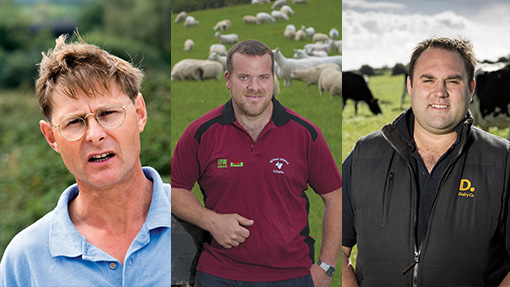 Three very different farmers have used the learning experiences from Nuffield Scholarships to develop their businesses and innovate. Jane King reports on the three finalists vying for the 2014 Steven and Gill Bullock Award 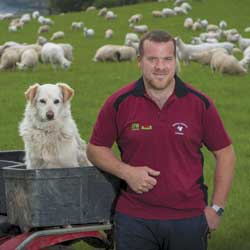 During a 4,660-mile road trip the length and breadth of the country, he discovered the advantages of sheep enterprises run simply on low-cost grazing systems using quality pasture.

He was inspired by the precise approach to breeding, feeding and management on New Zealand farms and impressed by their reliance on recording and measuring to continuously improve.

“On the long flight home I collated my thoughts and on the five-hour drive home from Heathrow I poured out my vision to my father,” he said. “When I finally drew breath, I asked him what he thought and the reply was ‘when do we start?’.”

Neil switched his focus to the native Lleyn breed and specialised in rotational grazing on unique purpose-made grass mixes using grass, clover and chicory leys. He also became an early adopter of technologies such as grass measuring tools and sheep conveyors to boost on-farm efficiency.

This entrepreneurial approach quickly captured the attention of other sheep producers and he was eventually chosen to become a demonstration farm running 15 open days each year.

He particularly enjoys using technology to gather metrics, which inform his decisions. He believes there is always room to become even better and lift efficiency.

Since completing his Nuffield scholarship, Neil has invested in the enterprise and his philosophy is about building a business independent of the single farm payment. It is a National Trust tenancy, but he has bought his own land and property for long-term security.

The enterprise has tourism interests in five rental cottages and two campsites, which are managed by his wife and father. There are also opportunities to expand into consultancy, but for now he has resisted this, preferring to be hands-on in refining his sheep operation. 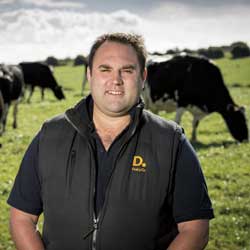 Once -a-day milking was a bit of a phenomenon when dairy farmer Tom Rawson travelled to America, New Zealand and Australia for his Nuffield Scholarship in 2005.

It was a concept that opened Tom’s eyes to new ways of farming and gave him the confidence to embrace change.

Today, he leads several businesses, including three dairy units with 1,000 cows, plus a consultancy known as Evolution Farming. The three dairy operations, which employ 10 people, are all on different agreements and may be joined by a fourth dairy soon.

“The future is even brighter today for once-a-day milking,” said Tom. “The true success of the concept is for the milk to be sold in kilos of fat and protein, not litres, as companies like Arla have stated that by 2018 all milk will be paid for in this way.”

The consultancy, in partnership with Oliver Hall, is growing fast and complements the farming activities. Tom adopts a practical, hands-on approach with his consultancy clients in that he will offer help in the milking parlour to get to know the people and businesses better.

The scholarship showed him the importance of good stockmanship, attention to grass and business management.

It also helped build his confidence in networking and thinking more ambitiously, which he says were vital because he was quite introverted before the study tour.

Tom is now actively involved in media work and public speaking at industry events, which helps promote the businesses. He is also a board member of DairyCo. 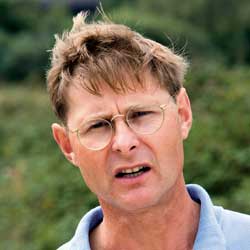 Pig and arable producer Robert Lasseter came to the conclusion that westernised food production was unsustainable after visiting China, America and Europe to look at the opportunities.

His scholarship provided a watershed moment where he “came back determined to make a difference” both to his business and UK agriculture.

Today, he farms on 162ha between Weymouth and Dorchester, growing combinable crops and running an indoor closed herd of pigs under the Freedom Food scheme, which are then sold to Tulip.

He now has all sows free-farrowing and conducts work with the RSPCA around trials for mutilations and behaviour. The arable side began seven years ago as a means of growing to feed the pigs and he now has a more sustainable system, which includes producing enough organic fertiliser for his cereals.

These ideas have led to a lot of public speaking to diverse audiences, including the World Congress of Agricultural Biotechnology in China. Robert also supports Farm Africa, is a governor of Kingston Maurward Agricultural College and a director of the Oxford Farming Conference.

The Steven and Gill bullock award

The Steven and Gill Bullock Award recognises those who, in the past 10 years, have used their learning from a Nuffield Farming Scholarship to grow their business, develop careers and contribute to industry. A prize of £1,000 is awarded each year at the Nuffield Farming Conference.

The award is given in memory of Steven Bullock who managed the Farmers Weekly farms from 1963-1988 and then became a director of the Nuffield Scholarship scheme, playing a pivotal role in British agriculture.

The judges were Stephen Fell, chairman of LEAF; Michael Jack, Agriculture and Food Adviser to HSBC Bank; and Jane King, Editor of Farmers Weekly. This year’s conference will be held on 20 and 21 November at the Ashford International Hotel, Kent.