With the British National Ploughing Championships just a fortnight away, Andy Collings takes a look at what makes a match plough special

Former British ploughing champion Ken Chappell is a man who has had more experience than most in matters of match ploughing. He reckons that an off-the-shelf plough is, in the right hands, capable of producing some fine ploughing.

“One of the essentials of good ploughing is to be able to set it up for the prevailing conditions,” he says. “And that means having all the adjusting bolts free to move – and knowing what to adjust.”

So what extras does the aspiring world match-ploughing champion need to improve his plough?

Two of the most useful additions are on the tractor linkage, rather than the plough. One is a hydraulically extending and retracting linkage arm support. Usually on the left hand linkage arm, this allows the plough to be levelled or angled through the pull of push of a lever.

The second is a hydraulic top link which can be lengthened or shortened, again by an in-cab lever.

Apart from being used during ploughing to make any required adjustments, these two rams are considered to be essential during the entry and exit of a ploughing run where the aim is to create a straight headland.

The plough is angled over so that only the front furrow is in action and then righted as the rear furrow arrives at the headland mark to bring that furrow into work. Some ploughs are also fitted with a ram that lifts the rear furrow clear of the land – as if it had been tripped by a large stone.

Hydraulic adjustment of the front furrow width is also deemed to be essential so that slight adjustments can be made to either straighten the ploughing or ensure the required distance between the converging lands is maintained.

Similarly, although not perhaps so essential, is a ram to enable all the furrow widths to be adjusted – vari-width.

Hydraulic rams aside – and most match plough tractors are equipped with up to six spool valves – mouldboard tail pieces that provide that finishing touch to the inverted soil can be useful additions in some conditions.

It goes without saying that wearing parts such as points and shares should be in reasonable condition – but not necessarily in new condition.

“We tend to grind off the end of points when they are new because they are too long for the job,” explains Mr Chappell. “What should be avoided though are points that are worn on just one edge – this makes it almost impossible to pull the plough in a straight line.”

With all hydraulic rams fitted, tail pieces in place and every adjusting bolt free to turn on discs, skimmers and mouldboards all that is required is years of experience and no mean amount of skill.

And then, and only then, you can begin to think about the world championships. 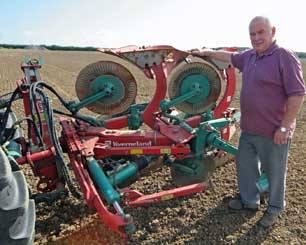 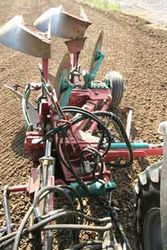 2. It looks like a plumber’s nightmare, but match ploughs rely heavily on the convenience of using hydraulic control of plough adjustments.