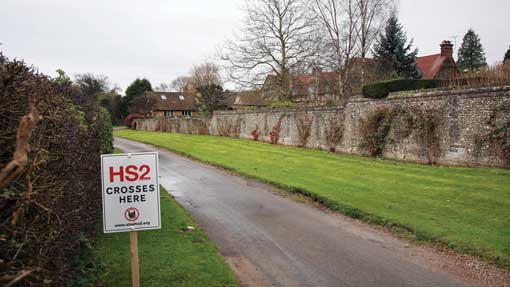 Farm businesses are being ruined by “excessive land grabbing” for the HS2 rail link, landowners have told MPS.

The CLA said the HS2 route between London and Birmingham would take out 6,916 acres (2,800 ha) of farm land and property.

A further 4,940 acres (2,000 ha) will be taken out of production during the construction phase for excavation, earth storage, environmental works and utility diversions. More than half of the land is classed as grade 1, 2, and 3a, the CLA pointed out.

The CLA’s comments came ahead of a vote on the second reading of the HS2 bill in the House of Commons on 28 April. Despite a backbench revolt by Tory backbenchers, MPs were expected to give their backing for the £42.6bn rail scheme to progress through parliament.

But CLA president Henry Robinson said: “It is crunch time for MPs to raise concerns over the sheer amount of land that will be taken in the name of the High Speed rail scheme.

“HS2 Ltd has demonstrated a total lack of interest in the plight of landowners and businesses. Many along the route are still waiting to see if their businesses will survive.”

Mr Robinson added: “A huge amount of land is being compulsory purchased purely for environmental mitigation, yet HS2 Ltd has given an inadequate explanation of how this will ever be delivered.

“Had landowners been consulted, more natural locations could have been found. This would be far more environmentally beneficial than taking often the most productive agricultural land next to the railway line and attempting to create good habitats in inappropriate locations.”

The CLA said fair compensation backed by a Property Bond Scheme would provide efficient delivery of the scheme while properly mitigating the impact for those affected.

The NFU has also called for the government to ensure HS2 had a minimum disruption to farming and food production.

NFU president Meurig Raymond said: “We are getting to a crucial stage in this process now but there are still many grey areas. HS2 presents an unacceptable treble hit for farmers. Firstly, essential farmland is already being lost to the HS2 line. Secondly, larger areas which have been highlighted for habitat creation and tree planting will take valuable food-producing land out of production.

“And thirdly, far more new habitat is being imposed than is being lost on a questionable ‘bigger is better’ principle. It is absolutely essential that government finds a balance between what is best for nature and what is best for agriculture.”

The NFU has a number of ongoing concerns about HS2 and is calling for government to:

Implement a binding and comprehensive duty of care that sets standards and timescales for the conduct of HS2, its contractors and sub-contractors during construction.

Appoint an independent ombudsman to swiftly resolve breaches to this duty of care.

Incorporate a substantial programme of “accommodation works” within HS2 construction plans to minimise long term impacts on farm businesses. This means ensuring farms are left in a strong, viable condition and with appropriate infrastructure and access such as water supply, drainage and bridges.

Promptly pay enhanced compensation reflecting the dislocation, distress and income lost as a result of the project.

Consult regularly and honestly with farmers and growers and their representatives throughout the project.