Dairy farmers are being urged to take rapid action to build grass covers in a month when many are said to be significantly behind target.

Farm business consultant Bryony Fitzgerald, who facilitates discussions groups across the UK, is concerned about the lack of average cover reported on farms in recent weeks.

“We are nearing early October and from that point it is almost impossible to build cover,” she says. “In the euphoria of rising milk prices we cannot forget the value of keeping cows grazing.”

Target covers will vary from farm to farm, but spring calving units which intend to milk through November should be targeting a cover of 2500-2600kg/ha DM while for autumn calvers, the average cover should be 2300-2400kg/ha DM.

“I think most people have abandoned the idea of 2800kg/ha DM on 1 October from the point of view of grass quality and regrowth, but farmers still need to build some high covers, pre-grazing 3200-3300kg/ha DM,” says Ms Fitzgerald.

“It is the most economical way of extending the rotation and advantage can be taken of ‘grass grows grass’ in late September.”

She advises farmers to protect regrowth by back-fencing. Cows should not occupy paddocks for more than 24 hours. Staying in a paddock for three days or longer reduces regrowth by 30%, she says.

In regions where farmers are legally permitted to apply fertiliser beyond 15 September, and where target covers have not been met, Ms Fitzgerald recommends applying 40kg/ha N to boost growth. Rotations should be at 30-35 days, as a proportion of the farm, and extending steadily.

The faster farmers move to slow the rotation, the faster average cover will bulk up and the better growth rates will be. “It is better to do it now, when growth rates are 40-50kg/ha DM than running out of grass and having to put in the same amount of feed later when grass is only growing 5-10kg/ha DM because you get better value for the feed used,” says Ms Fitzgerald. 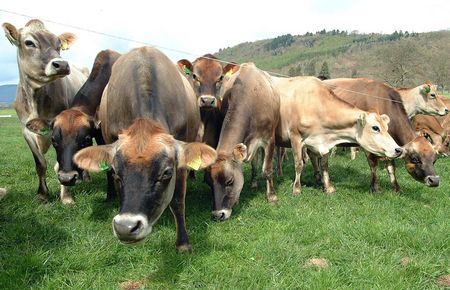