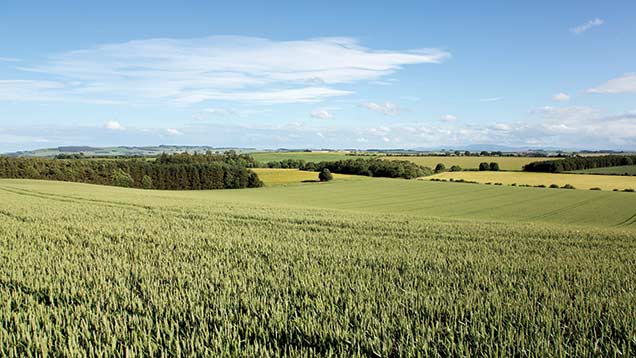 Top-class Scottish farms are coming on to the market in increasing numbers, driven in part by depressed commodity prices and interest from English buyers, say agents.

About 26,000 acres of Scottish farmland was publicly marketed in the year to the end of July, according to Savills – just 4% up on the same period last year.

But the quality and scale of the farms being sold was quite different, agents said.

Large, ring-fenced arable units, grade 1 land and high-tech dairies have all been put up for sale.

Jamie Wedderspoon, associate at Savills in Edinburgh, said: “We’re only slightly ahead on acres but I think there have been larger and higher-quality units.

“I think some farms are cashing in because the perception is that the land price may not go any higher and that there is good demand out there.

“With interest rates where they are and commodity prices slumped, maybe people are just taking a gamble that the time is right.”

Chris Edmunds, associate director at Davidson and Robertson Rural, said: “People are really looking at their businesses because commodity prices are back in all sectors.

“Reduced and delayed BPS and environmental payments are also affecting cashflows and are leading to people thinking very hard about their enterprises.

“Some are thinking that they don’t want to do this any more.”

Despite the increase in available acres and high-class units, agents agreed that prices were holding up, due in part to a high demand for quality land from English buyers.

Alistair MacMillan, who handles Scottish farm sales for H&H Land and Property, said: “We launched six farms last week, all fairly large, and we’ve had a very healthy interest in them already.

“We’re actively looking to market in England because [English buyers] are getting more acres for their money.

“We’re seeing a lot of viewers and buyers from the South who are selling for silly money and coming up here to double their acreage. It increased noticeably at the end of last year and has continued.”

Mr Edmunds said that the demand for good-quality, well-run farms in the Scottish Borders and northern England was having a knock-on effect on some grassland units.

“With more availability both publicly and privately, people can afford to be more picky,” he said.

“The best units are selling fine but the more marginal ones may not be as attractive and some are taking longer to sell.”