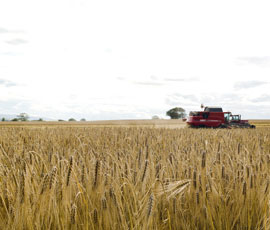 Its Farm Business Income survey, which covered the 2010 harvest, found that higher prices boosted average incomes on cereals farms by 97% to £84,800 in real terms, while general cropping farms saw a 72% increase to £111,700. Incomes were also helped by improved planting conditions in autumn 2009, which allowed a return to winter cropping and higher average yields, DEFRA said.

Average incomes were also up to a lesser extent on dairy farms, by 7% to £66,200 in real terms. However, while milk prices had improved, increased output from cropping enterprises on those farms also contributed to the increase.

The rise in arable profits was in stark contrast to the livestock sector, where average incomes fell, mainly due to higher feed costs. Specialist pig producers were hardest hit, with average incomes down by over a third to £44,400. Incomes on lowland grazing livestock farms were down 29% to £21,300, while those in Less Favoured Areas saw a 19% fall to a similar level.

NFU chief economist Phil Bicknell said the rise in arable incomes was to be expected given the higher cereal prices since last harvest, and it represented a turnaround from a loss-making in 2009/10.

But the survey illustrated that revenue from the single payment scheme, environmental stewardship, and diversification, was still critical to ensuring the average livestock farm remained in the black, despite firmer cattle and sheep prices, he added.

“Lower profitability means that some farmers will be more reliant on their direct payments this year. CAP continues to play a crucial part in supporting agriculture and its Single Payment Scheme is an effective tool that helps farm businesses cope with market volatility. Farm gate prices might be stronger, but this isn’t reflected in the bottom line for some sectors,” he said.

“Our big challenge in the long term is to produce more and impact less. That requires efficiency gains and productivity increases, and in turn that needs investment. Farmers will only invest if they’re profitable.”