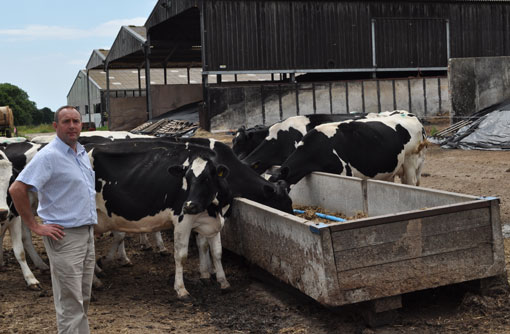 After 18 months of being free from TB, the disease has just reappeared again at Clinton Devon Farms in Sidmouth, Devon.

The last routine 12-month test uncovered six positive reactors, and it was reclassified as ‘severe interpretation’ when, a month after testing, lesions were found in some of the reactors. “This meant the four inconclusives were classed as reactors and had to go,” farms manager George Perrott explains.

“Ten out of 500 cows had to be culled in one go, which is the most we’ve ever had. After one routine TB test, our overall replacement rate, which is already higher than it should be, has gone up by 2% and we’re now locked down again.”

The farm will lose about £40 a head on every bull calf sold, plus there is the lost milk income from reactor cows and extra cost of more frequent testing, he says. In addition, the presence of TB can interfere with the testing protocol already in place for Johne’s disease and vice versa.

But like so many farms, the reoccurrence of the disease does mean that testing regimes have been fairly well rehearsed at Clinton Devon Farms. Mr Perrott says up to 900 cattle can now be tested in a 12-hour period by three staff and the vet – equivalent to 75 an hour.

“We have someone reading ear tags and catching the cows’ heads in the crush, so the vet has to just reach in and do the test. The vet reads out the tag number and skin thickness figure to a scribe, before the cow’s let out and the next one’s brought in. Someone else funnels them back down the race to make sure everything’s kept moving.”

Mr Perrott tries to minimise disruption by fitting TB testing around the farm’s normal routine, normally after milking. Typically one 250-cow herd is tested in the morning and the other 250-cow herd in the afternoon, with all other stock done in between.

He is unsure why the disease has reappeared. “As an organic farm we do feed the cows a lot more grass than we used to when farming conventionally and heifers are out all winter where conditions allow, so maybe that’s put us at more risk,” he suggests.

“Alternatively we may have inadvertently helped the health of badgers when we used to have a lot more sheep and used lick buckets out in the fields.

“Whatever the reason, all I know now is that we are letting badgers die a long, slow death, while we’re killing cows. It’s just wrong.”

One consolation to the TB news is the milk price, which averaged over 40p/litre last month. October’s Dairy Crest organic price for the autumn-calving herd was 38.9p/litre, while the spring-calving herd averaged 40.6p/litre.

“Hopefully we’ve still got another two more good months, so we should average about 35p/litre this milk year, whereas we budgeted for 32p/litre. I can’t see too many negatives on the horizon to drag prices down, so next year’s budget will probably be for 35p/litre,” Mr Perrott says.

“I’m very pleased with what Dairy Crest are doing at the moment, but my only reservation is that we’d like to be paid that price for as much as we could produce; at the moment we’re sitting on our hands a bit due to the way the price is modulated to only pay a premium on a proportion of what we budgeted to produce a few years ago.”

Another positive this autumn has been the lamb price. So far 428 of 590 lambs have been sold, at an average price of £82 a head. Just over a third of those received an organic premium, which was better than expected and a welcome boost to cashflow, he notes.

The flock of 320 mules and 50 Texels has been significantly downsized over the past two years, as the shepherd’s time has been directed towards the youngstock herd.

“We’ve got about a quarter of the sheep numbers we used to have, so three-quarters of his time is now spent feeding calves and youngstock. I reckon we’ve seen much lower calf mortality because of that, and the calves seem to be heavier at weaning and set up better for later life,” he says.

It also allows the herdsman to dedicate more time to focus on improving cow health, something that is increasingly important with stricter quality requirements on milk contracts; Dairy Crest’s current contract requires bactoscans below 30,000 and cell counts below 200,000.

“Cell counts used to be an issue for us, but the guys have done a sterling job in getting them down by paying attention to detail during milking.”

Even small changes, such as installing automatic parlour washing and replacing the old rubber scraper with a more efficient maxi-scrape have helped improve hygiene, as well as save time.

The manual cluster flush in the parlour has also helped improve hygiene and allows cows to be individually targeted, although Mr Perrott acknowledges it is slower than automatic systems. “Both parlours have been designed around time saving, speed of cleaning and speed of cow flow.”

The continued focus on improving efficiency across the dairy enterprise is central to the current expansion plans at Clinton Devon Farms.

It is currently in the process of submitting a planning application for a new 250-cow cubicle house at Otter Farm.

Mr Perrott hopes to run two 250-cow herds at the site in order to maximize use of the existing 20:40 parlour. “At the moment about six to seven hours a day is spent milking, washing down and scraping, but I reckon we could run two herds on one site by double-shifting in the parlour.”

This would make much more efficient use of the existing equipment and buildings, plus the new slurry transfer system recently installed to take 720 tanker movements a year off the village road and will also take the extra dirty water.

As part of the plans, Mr Perrott also hopes to build a new private access road into the farm that will take all farm traffic away from the local village – about 5,500 movements a year.

“At the moment it takes about five hours to feed both herds, but with our two dairy units four miles apart and youngstock on a third site, the best part of an hour of that is probably spent on the road. It would be better all round if we could cut out some of these movements.”

“It is a big investment, but the business plan we put forward for it [to the trustees] expects it to last at least 12 years, which is what we said for the TX68 combine and have exceeded that by operator care and attention to detail.

“Capacity’s not too dissimilar to our current machine, but it will be a bit bigger than we need. This may allow us to take on odd bits of silage contracting in the future, but that’s not something I’m looking to go out and actively pursue.”