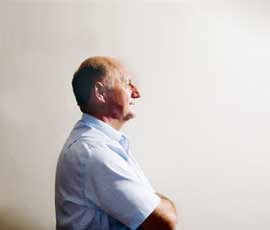 A replica wartime poster bearing the legend “Keep Calm and Carry On” hangs on the wall in Jim Paice’s parliamentary office. It is a motto that has stood him in good stead since the MP for south-east Cambridgeshire lost his job as farm minister last September.

He might no longer hold the post he wanted for so long, but Sir Jim believes he still has much to offer UK agriculture. And nine months after his sudden departure from DEFRA, he feels the time is right to start rebuilding his profile.

“It’s time to put aside what’s happened in the past and time to move on,” he says. “My interests and concerns about food and farming are as strong as they ever were and more people are asking me what I think on various issues. So I thought it was time I raised my head above the parapet.”

He might not have made many headlines recently, but the past few months have been busy. The weight of office no longer sit heavily on his shoulders, but he attends a “lot of backbench committee meetings” and now sits on the select committee for Scottish affairs.

“I suppose you could say I was trying to climb the slippery pole – but I am no longer trying to do that. I have been relieved of my position and I am certainly not going to revert to the eager young beaver that I used to be.”

This means more time devoted to constituency work – and to the concerns of the people of south-east Cambridgeshire, who have returned him to parliament in every election since 1987. Folders in his office suggest current topics of interest include same-sex marriage and wind farms.

But agriculture is never far away. In what little spare time he has, he enjoys tending his small herd of Highland cattle. And on the window sill of his London office are two models – a Highland cow and calf at foot – to remind him of home.

The end came in the form of a phone call from David Cameron while Sir Jim was attending last autumn’s Livestock Event. He arrived at the Birmingham NEC as a VIP guest and minister and left a few short hours later as an MP.

Awarded a knighthood the day after he was sacked, he was also named Farming Champion of the Year at the 2012 Farmers Weekly awards. The citation described him as a hard act to follow, “showing how a minister can work with an industry, challenge it, negotiate with it, but ultimately, move it forward to help it achieve its potential.”

Major achievements include putting into practice his pledge to introduce a badger cull to combat bovine tuberculosis in cattle. Ruled out for 13 long years by the previous Labour administration and finally due to take place this summer, it wasn’t an easy promise to fulfil.

“As anybody in government finds, you do not have the unfettered decision-making opportunities that you often wish you had. Bovine TB is as good an example of that as any, because it wasn’t a case of being able to do what I wanted to.

“It was a case of making sure that the whole process was watertight legally so we could withstand a judicial review. That meant it all took a lot longer than I had hoped and it got quite frustrating. But you have to accept that is how things work in government.”

Unlike many of his ministerial predecessors, however, Sir Jim knew agriculture inside out. He had served on the opposition front benches as a shadow farm minister for six years. And he had first hand experience of working within the industry as a farm manager before entering politics.

“I think I was probably able to lead more effectively than if I hadn’t had that experience and commitment [to the industry]. I am certain that my philosophy fed through to the rest of DEFRA and most staff appreciated that leadership.”

There is, however, a lot of unfinished business. Early last September, Sir Jim helped broker the deal between industry leaders that resulted in a long-awaited dairy code of practice aimed at securing a fairer milk price for farmers. His dismissal days later meant he wasn’t around to see it implemented.

He’s less pleased with progress on CAP reform, which remains elusive despite a looming deadline at the end of this month. Even then, it’s all very well finishing the European negotiations, he says, but any outcome then has to be turned into a real set of rules.

“Being slightly immodest for a moment, I think my knowledge of the industry would have enabled me to make sure that the way those rules were applied was farmer friendly, which is where the last government fell down completely.”

But Sir Jim believes the Macdonald review of farming red tape had the potential to be his most lasting achievement.

“The Macdonald report had the potential for a pretty substantial change in the way DEFRA and its agencies related to farmers – and I would have liked to have seen it given more attention to drive through the culture change that is at the heart of it.”

A culture change is needed among parts of the industry too, he adds. “There are sometimes hard truths that are better told by a friend than someone who is not trusted. We have still got a significant number of farmers who hark back to the days of very closely linked government intervention.”

Citing milk as an “obvious” example, he says, referring to his infamous speech last summer, during which he implored 2500 dairy farmers to check their own costs of production before taking to the streets to call for milk price increases from processors.

“Perhaps being too blunt in telling them they needed to check their costings was an area where they didn’t take too kindly to my comments. But overall I did my best to do what I believed was right for the industry because this country needs a strong and vibrant food and farming sector.”

Youngsters are key to that future, he adds. And he’s making way for the next generation himself by standing down at the next general election – not though, he hastens to add, because he lost the job he loved so much but because he is 64 and doesn’t want to commit himself into his 70s.

That said, he’s not taking a complete back seat and recently joined the board of the National Institute of Agricultural Botany. “I hope to go on in some leadership role within the industry – I have no specific plans but I do hope to continue supporting the industry in whatever way I can.”