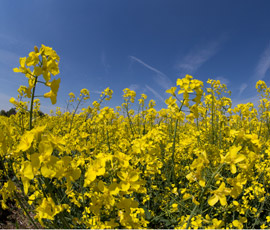 UK growers could be left without a key market for their oilseed rape by as early as 2015, following a vote by MEPs to limit biofuels production.

Last week (Thursday 11 July), the EU environment committee voted in favour of a 5.5% cap on the contribution of first generation biofuels – those from sugar, cereals and rapeseed – to the EU’s target of producing 10% renewable transport fuel by 2020.

They also voted in favour of mandatory reporting of indirect land use change (ILUC) factors into the accounting of greenhouse gas emissions for biofuels under the Fuel Quality and Renewable Energy Directives.

At present 40% of the UK oilseed rape crop is exported to Europe for biofuels production, while UK bioethanol production, including the newly opened Vivergo plant in Hull, provides a home for 2.2m tonnes of wheat, as well as providing protein feed to the livestock sector.

NFU combinable crops adviser James Mills said the proposals would damage biofuels production across the board, with bioethanol plants the worst hit.

“Potentially anything being exported for biodiesel production will be homeless,” he said. “It’s another step towards the market being capped and the capping of any market, in our opinion, is what the EU should be moving away from.”

The loss of a key market for UK oilseed rape would hit growers’ rotations – it is widely recognised that a wheat crop grown following oilseed rape produces up to 1t/ha more at harvest, he said.

“It will ensure that fossil fuels continue to dominate transport for the foreseeable future and it will reduce the stimulus for investments in improving agricultural yields and practices.”
Clare Wenner, Renewable Energy Association.

Secretary-general Pekka Pesonen warned a 5.5% cap would put an end to the sector in many countries, threatening 220,000 jobs mostly in EU rural areas, as well as threatening animal feed supplies.

Meanwhile, Renewable Energy Association head of renewable transport Clare Wenner described the proposals as a “conceptually flawed attempt to force European biofuel developers to pay for the assumed emissions of other industries in other regions of the world”.

“It will ensure that fossil fuels continue to dominate transport for the foreseeable future and it will reduce the stimulus for investments in improving agricultural yields and practices,” she said.

MEPs will vote on their position in the plenary on 10 September with Energy MEPs, who want a 6.5%, rather than 5.5%, cap, allowed to put forward amendments directly in the final vote.