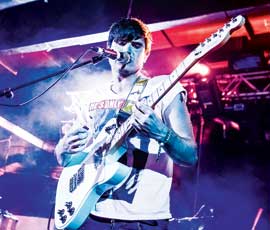 Punk rock as a lambing aid? Rachel Jones talks to the lead singer of Straight Lines – a Welsh band with some serious farming credentials

Tom Jenkins and his bandmates have supported heavy metal stalwarts Motörhead at the Hammersmith Apollo, played major music festivals in the UK and USA and released three albums under one of the UK’s leading independent record labels. Tom is also a farmer.

A Pontypridd boy born and bred, when he’s not touring with Straight Lines, Tom lives on his family’s 400-acre hill farm which is home to 600 ewes and 50 beef cattle. From day one the farm has played a part in the development of the Straight Lines sound.

In their three-year career, Straight Lines have shared the stage with big names like:

Before the band was even officially a band, 25-year-old Tom would take his acoustic guitar down to the lambing sheds where he would write songs and test out material on the ewes.

“I’d grab an hour here and there, just mess about with the guitar for an hour or so,” he explains. “I don’t know if it encouraged them – it probably scared the lambs out more than anything!”

Farm themes also emerge in some of the band’s lyrics. In the song Half Gone from their latest album there’s a whole verse dedicated to the general public’s ignorance of the importance of farming. Tom even namechecks his “father a farmer”.

But what started off as a hobby and a “bit of a laugh” in 2009 has snowballed to the point where big things beckon. This year Straight Lines supported twice Grammy-nominated American rock band The Presidents of the United States of America on their European tour, they’ve had daytime Radio 1 airplay for the first time and have a healthy schedule of 24 UK gigs before the autumn.

“There have been so many highlights,” says Tom. “We’ve played major festivals in the UK and the USA and legendary venues like the Hammersmith Apollo and The Paradiso in Amsterdam.

“Another highlight is our album going in at number four on the iTunes rock chart, which was a great achievement as we recorded and produced the album ourselves in a garage studio.

Farming lyrics from Half Gone

“And all propositions from high up positions that promise to change our ways.

“For my father a farmer who holds onto karma to bring back better days.

“And I can sing all the songs I like but it won’t change a single thing until this land of plenty will run dry and empty and fashion is bone and skin.”

“We’ve never had any great expectations, so anything that happens is always much appreciated. The next step is promoting our new album at festivals in the summer and a four-week headline tour in September and October.”

But while the bright lights of the music industry are beckoning, Tom’s second career still has to make some concessions to the farm.

“When we released the second album we had to push it back a week because of lambing. Our label were like ‘what the hell?!’ They didn’t understand it at all. But we had 600 sheep indoors giving birth.

“Sometimes it does get frustrating juggling the farm and the music but as long as I’m there for shearing, lambing and harvest it’s all good.”

You might have listened to Straight Lines without even realising it. The song Runaway Now from the band’s debut album is the track behind our Farmers Apprentice trailer video.