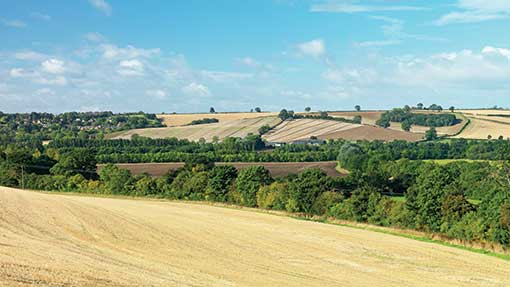 Bigger areas of productive agricultural land are starting to come to the market at last.

About 483 acres of productive arable land in Oxfordshire, 551 acres of grassland in mid-Wales, and a 656-acre mixed estate in Derbyshire have come to market with a combined value of £17.05m.

Mill Farm near Banbury, Oxfordshire, offers about 483 acres of Grade 3 arable land and woodland for sale as a whole at a guide price of £5.25m, or in four lots. Two cottages, a yard and modern farm buildings are included in the sale.

Two three-bedroom cottages, the farmyard and farm buildings are grouped together and make up lot one. Both cottages are rented out, with one subject to agricultural occupancy.

The land consists of loamy soils over clayey and ironstone soils and the main cropping rotation is winter and spring wheat and oilseed rape. Potatoes have also been grown in the past two years.

All the land has good road access and the current farmer has made a particular effort to minimise soil compaction.

Dolanog Estate, near Welshpool, mid-Wales, offers about 551 acres of permanent pasture and woodland in a ring fence, a hydroelectric scheme and shooting rights over a further 478 acres. It is being offered as a whole in the region of £3m, or can be sold in lots as required.

The estate includes a 17th-century five-bedroom farmhouse, three cottages and a range of traditional and modern farm buildings. These and about 404 acres of pasture are divided between two livestock farms – The Plas and The Mill.

Woodland extends to about 147 acres and there are common grazing rights for 90 sheep. The pheasant shoot on the estate has been running since 1898.

Farm buildings include traditional stone buildings, some of them listed, plus an open-fronted lambing shed, a steel-framed machinery store, a modern livestock building and a steel-framed fodder store.

The permanent pasture consists of loamy and clayey acidic soils extending from the River Vyrnwy to 1,000ft above sea level. The operational hydroelectric scheme was installed in 1921 and is leased out until 2037. SPS entitlements will be transferred subject to the Welsh government’s transfer regulations. (Berrys 01743 271 697)

The 646-acre Ednaston Estate near Ashbourne, Derbyshire, has come to market at a guide price of £8.8m as a whole, or in up to nine lots.

The majority of the land is split between lots one to three. Dam Farm makes up lot one with about 98 acres of pasture, 59 acres of arable land, 49 acres of woodland, a four-bedroom house, and two cottages.

Lot two is Bradley Old Park South, which offers about 111 acres of arable land, 102 acres of pasture, 56 acres of woodland and a five-bedroom house. Two modern buildings are also included in the lot – a seven-bay, steel portal-framed livestock shed and a four-bay steel-framed Dutch barn.

A further 105 acres of arable land with a small area of woodland and pasture is for sale as lot three.