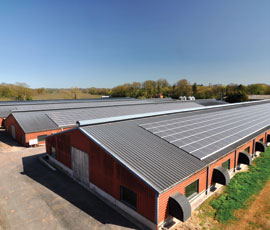 The UK’s largest privately-owned solar photovoltaics installation has gone live at a poultry farm in Herefordshire.

Installation cost around £2.60-2.80/W, although some additional costs were incurred due to the system’s complexity and short timescale for completion ahead of proposed cuts to the Feed-in Tariff this summer. Payback is estimated at 9-10 years. With the Feed-in Tariff, the farm will go from having a net energy cost of around £35,000 per annum to a net annual income of around £55,000.

Initial go-ahead for the scheme was given at the end of December 2010, planning and design took just over three months, and installation company Southern Solar completed the work in six weeks.

Howard Johns, chairman of the Solar Trade Association and managing director of Southern Solar, said the installation was a good example of how solar PV could benefit UK farmers and help cut carbon emissions, but it was threatened by the review of Feed-in Tariffs.

“The coalition government needs to acknowledge this and provide a stable Feed-in Tariff regime so farming and other industries in the UK are able to do the same.”

The proposed cuts to incentives for solar – consultation for which closes on 6 May – meant projects such as this would not be financially viable for other farmers, he warned. “We are urging people to support the UK’s fledgling solar industry and calling on government to remove the cap on the tariff and leave us with a Feed-in Tariff levels that works.”

• The government’s Feed-in Tariff consultation can be found at www.decc.gov.uk – click on ‘Consultations’.