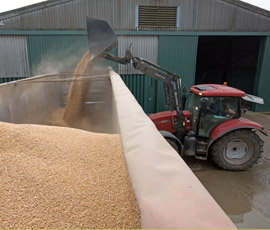 Average haulage costs have increased by 8% since March 2012, according to the latest HGCA UK grain haulage survey.

While the average per mile cost of grain haulage for 10-mile journeys is 49p/t, for a 150-mile journey the cost falls to 9p/t, due to better fuel efficiency over long distances and the dilution of loading and tipping costs over greater mileages.

Other new ways to increase haulage efficiency for some regions could include alternatives to road transport, such as coastal vessels, for example to transport grain from the surplus regions of the South and East of the UK to the deficit regions of the North.

It looked at hauliers’ most common journeys, which included distance travelled, tonnage and the cost per tonne. The figures exclude VAT and include a fixed cost per tonne to cover overheads as well as mileage-associated costs such as fuel, spare parts and maintenance.