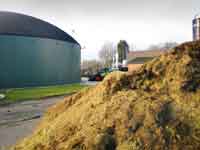 Farmers in Germany have led the way in the production of biogas over the past decade, and UK farmers could learn from their experience. Paul Spackman reports.

2010 was a record year for the German biogas sector. Some 1200 new plants were constructed last year, taking the country’s total number of agricultural and industrial plants to around 6000.

“It is a genuine boom and this trend will continue,” Hermann Garber from the VDMA Agricultural Machinery Association told an international biogas conference hosted by Claas at its Harsewinkel headquarters last week.

Uptake has been largely driven by the high levels of support available under the federal government’s feed-in tariff scheme, and this model has been adopted by other countries worldwide, including the UK last April.

“There are extensive government support measures in Germany and the goal is to double the contribution of bioenergy [to total energy needs] by 2020,” Dr Garber said.

But the main support scheme was due to be reviewed by the German government next year, and many people feared the favourable payments for generating electricity and heat would be reduced.

As a result, improving the technological efficiency of biogas production had taken on even more importance. “This includes everything from crop production, to transport, processing and the conversion into energy in the form of electricity, heat and fuels.”

Speakers outlined a number of areas crucial to the maximisation of biogas production from systems that use a combination of energy crops and livestock wastes. “Efficiency of a biogas plant means generating maximum power and heat using minimum resources – materials and expenses,” Helmut Buckel of RUF/R+R Biogas said. “This means gathering and analysing operational data on a daily basis.”

Dominik Grothe from Claas said about 50% of total biogas production costs related to the plant itself – gas production, electric generation and residue storage – while substrate production (seeds, fertiliser, harvest, handling etc) made up most of the remainder.

“After the decision on the concept and construction of the plant, the economic adjustment screws are mainly in substrate management,” he said. “This requires intensive planning.”

• Minimise energy loss in the clamp with fast filling, good compaction and an air-tight cover

• Record digestate production and use for relevant authorities

Stefan Tiggemann set up a 250kW biogas plant on the family’s mixed arable and pig farm near Beelan in northwest Germany last year. The unit was constructed by PlanET Group and runs on slurry from 4500 fattening pigs, plus a combination of maize, grass and rye silage grown on the 290ha of mainly sandy soils.

It has just completed its first full year of operation and Mr Tiggemann is happy with how it has performed, although he acknowledges it has been a steep learning curve. “Ours is a fairly simple system, but we still have to take time and care to look after it. The first three or four months were especially difficult.”

Mr Tiggemann’s system features two 2000m3 capacity digesters, both heated via the walls and floors to the optimal 40oC. Around 90% of total gas output comes from the primary digester, while the second is mainly for storing digestate, with a small amount of gas collected.

Daily feedstock requirement is about 10m3 of pig slurry, 8-10t of maize silage and up to 4t of grass or rye silage, depending on the season. “Forage rye is harvested just as the head comes out in early May, so we usually feed it [into the digester] in June to October. After the rye is cut we plant the maize.”

Biogas yields using maize silage are 20% higher on a dry matter basis than when using grass or rye silage, largely due to the relatively high water content of the latter, he notes.

The biogas produced supplies a Scania engine modified to run on biogas and biodiesel by Bavarian company Schnell. It uses around 110-115m3 of biogas per hour, plus some biodiesel. “We get around 41% efficiency on electric output with our engine, whereas many biogas-only engines average 38-39%,” he says.

Electricity is sold to the national grid, and the farm receives a payment of 21-22 cent (18-19p) per kWh under the government’s feed-in tariff scheme. This payment, fixed for 20 years, is made up of a basic payment, plus various bonuses for using slurry, home-grown feedstocks and innovative technology.

Mr Tiggemann says grid connection wasn’t a big problem because a 10kV cable runs past the farm, so just a transformer was needed. It cost about €45-50,000 (c£40K) to connect to the grid in total.

He estimates a total project cost of €3500 (£2965) per kW of electric produced, with a payback of about six years (excluding interest payments). “We didn’t get any grant funding, so it was all paid for by bank borrowing and our own money,” he says. He expects the digesters to have a lifespan of 20 years, the engine nearer four to five years (35-45,000 hours) and the digester roof nearer seven years.

The heat produced by the CHP engine is used to warm the pig unit, farmhouse and digesters. “We still have more heat than needed,” says Mr Tiggemann. “We’ve considered supplying a small office across the road from the farm, but I don’t think it’ll justify the extra cost.”

Around 6500m3 of digestate is also produced by the plant each year, which is stored on the farm until it can be used. “From October to January we’re not allowed to spread, so we store the digestate on the farm before spreading it in April, just before planting the maize.”

Mr Tiggemann advises any farmers considering investing in biogas production to do their costings carefully and not to underestimate the work required, especially in the early stages. But once the system is established, he reckons less management time is needed – about an hour a day in his case; half of which is spent filling the feedstock hopper and half spent checking equipment and maintaining the engine.

In addition detailed records of feedstock use, power and heat output must be kept, as these are checked by an auditor and the electricity provider before the electric payment is made.

• Family farm, run by Stefan Tiggemann and his father