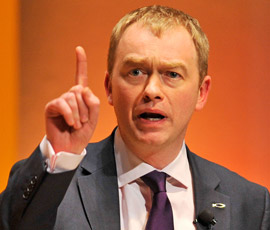 Liberal Democrat president Tim Farron has called for a parliamentary debate based on Farmers Weekly‘s campaign to get more UK food into our hospitals.

Mr Farron, who is also MP for Westmorland and Lonsdale, launched an early day motion in support of the Get Better, Get British campaign on 5 June.

The motion calls for MPs to debate the issue at the earliest opportunity and calls on the Department of Health and DEFRA to support the campaign’s aims.

The motion has been backed by seven other MPs from four different parties within 24 hours of its launch.

The Get Better, Get British campaign contacted more than 200 hospital trusts across the UK and put questions to them under the Freedom Of Information Act. It found that 40% of food served to patients was imported from thousands of miles away.

The picture that formed was of a patchy approach to hospital food, with purchasing varying widely from area to area. Two-thirds of hospitals said they did not know where their food was sourced.

“The NHS has been omitted from the government buying standards, which stipulate that food bought for government departments meets certain quality criteria. We need to back UK farmers and produce, so I am delighted to support this campaign.”

Have your say on hospital food