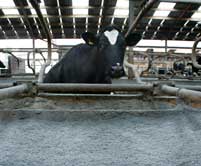 Farmers should look locally to source alternative bedding materials this winter, says Phil Clarke of P and L Agriconsulting. “Find out what is available in your area to reduce bedding costs.”

It is well worth investing in good quality bedding, says Mr Clarke. “There is no point using poor quality straw. It may be cheap, but in the long run it will be twice as expensive in terms of problems.”

There are a number of alternative options available. “Shop around for cheap commodities in your area – companies producing a by-product can be an attractive option” 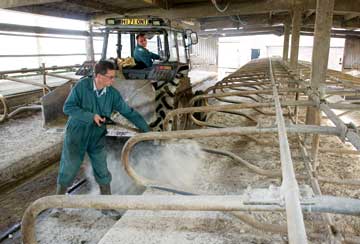 “In Cheshire, lime ash is a good option for local producers at about £20/t for an ash paper mix.” However, this product will become less economic the further you move away from the source.

“At pH 8.5, ash is highly alkaline, meaning it is good for reducing mastitis and somatic cell counts.” The product is also highly absorbent allowing a lot of liquid to be absorbed without it getting wet.

“Ash can be severe on its own, so it is better mixed with paper to increase comfort.”

An iodine based teat dip with good emollient levels must be used when bedding on ash, he says. “When a chlorhexidine dip is used, ash will react with the chemical resulting in teat burn.

“The product can also be used for loose housing dry cows in the last three to four weeks to help reduce mastitis, but cows should not calve on ash as the high alkalinity is not suitable.”

Gypsum-impregnated plasterboard paper can be a good option if you are located near a recycling centre, says Mr Ohnstad.

Plasterboard paper dries quickly and, because Gypsum is an alkaline product, it acts as a natural disinfectant so beds do not need liming.

“The gypsum content of plasterboard also adds to the nutrient value of slurry.” 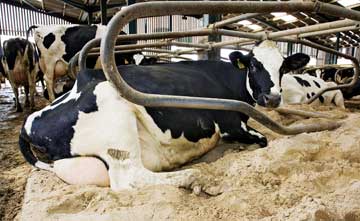 Sand is the gold standard for cow comfort and mastitis, but in terms of “farmer sanity”, sand must be considered carefully, says Ian Ohnstad, dairy husbandry consultant for The Dairy Group.

“It is essential to look at your slurry handling system before considering sand.”

Cubicles can be converted to sand by fixing a retainer to the back of the beds and filling with three to four inches of sand. “In the short-term, sand can be put over mats, but ideally mats should be removed.”

But, when considering temporarily converting to sand cubicles in response to straw shortage, farmers should consider the change carefully. “You will use a minimum of 2t sand a bed over the winter – as a temporary measure you may not wish to invest in a dispenser, but this is a lot of sand to shift by hand.”

“Paper crumble can be mixed 50:50 with chopped straw or shavings or used as a bedding replacer,” he says.

“As a result, they bring potential savings by reducing the amount of straw or shavings used – obviously this will depend on location in the country.”

Envirobed is made from paper sludge from recycling mills and dried to 95% dry matter, says Liz Russell, managing director for Envirosystems..

“Because the material is dried to such an extent, it enhances the absorbent quality of the paper, acting like blotting paper.

“A lot of farmers have reported improved cell counts and faster milking because cows are cleaner.” And because the product is pH7-7.4, beds do not need to be limed.

Using bark wood in loose housing can cut straw use by a third, says Mr Clarke. “Bark can be put under straw in dry cow yards to create an absorbent layer – straw will last longer and you will use less of it.”

Bark corrals could also be an option for keeping youngstock, dry cows or low yielders outside to reduce costs.