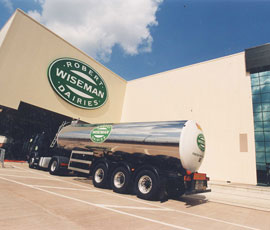 The proposed takeover of Robert Wiseman Dairies by Müller is to go ahead in a deal worth almost £280m, it has been announced today (16 January).

The cash offer of 390p for each Wiseman share was some way above the recent share price, which fell to below 250p at the beginning of the year.

RWD executive chairman Robert Wiseman said the deal would create a leading integrated dairy business in the UK, with “complementary positions” in the yoghurt, potted desserts and fresh milk market.

“Wiseman has its origins as a family business and, since listing in 1994, my family has retained a significant stake in the business. It is heartening to know that the business will become part of another family-owned business in Müller.

“Müller’s offer represents an attractive price for an outstanding business and Müller recognises the importance of Wiseman’s management (who will continue to lead the business alongside Müller), employees and our best-in-class assets. These factors have contributed to the Board’s recommendation of this transaction.”

Müller chief executive Heiner Kamps said it was a strategic move by the company to enter a new market segment in the UK and the complementary businesses would create “significant opportunities which will benefit suppliers, customers, consumers and employees”.

“We look forward to working with the experienced Wiseman team and combining our complementary skills and extensive experience in the dairy industry to create a larger business with enhanced prospects.”

“The potential synergies between the two companies are clear. Müller is a very successful multinational dairy company making value-added products and Wiseman’s is a leading UK liquid milk processor. The similarities between the two companies are also apparent – both have their roots in family-run businesses that have invested successfully in modern plant, product development and branding.

It is understood that all shareholders will be written to in the next few days and will be required to accept or reject the offer by early February.

“In the meantime, Wisemans have advised us that it is business as usual at the company,” Mr Jamieson added. Any farmers who supply RWD and are looking for further information are advised to contact their local Wisemans field officer.

First Milk has a significant (10%) share in RWD. The firm said it had signed a letter of intent to accept the offer from Müller, but would not make any further comment at this stage.

Reacting to the announcement, NFU dairy board chairman Mansel Raymond said: “The UK dairy industry is entering into an exciting phase in its evolution with farmers now looking to make investment decisions.

“It is important that the processors and the supply chain now work to grow together as farmers will be looking to build long-term, trusted relationships which includes fair pricing and transparent terms and conditions.

“We will be looking to Muller and to Wiseman Dairies to build on these foundations in whatever comes out of the current takeover bid.”

Wiseman shareholders who were on the register as at 30 December 2011 will retain the right to the interim dividend of 5.75p per share, which has already been declared and is payable on 2 February 2012.

The UK operations of Müller Dairy are based in Shropshire, where around 150 local farmers supply milk for its yogurts business. The company recently ran in to criticism from its suppliers after cutting the farmgate milk price by 0.5p/litre from 1 February.