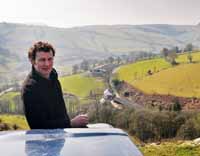 As spring lambing gets underway at Tregeiriog Farm, Aled Jones is cautiously optimistic about the coming year. Last season’s strong prices look set to continue for the foreseeable future and decent weather during February and March means ewes go into lambing in generally good condition.

“We’ve probably just had the best lamb season ever, with [2010/11] prices averaging around £60 a head,” he says. “Three years ago we’d have been looking at nearer £40, so the better prices have covered increased costs. Even 44 barren ewes recently sold for an average of £52 a head, with a top price of £67.”

But while prices are good, costs are rising – even on this extensive grazing system – and for the coming season are likely to average around £12 a head, up about £2 a head on last year and double the level of three years ago.

Mr Jones is all too aware that market prices and input costs can quickly change, so he is constantly looking for ways to tweak the system to protect future profitability. “Having been a Farming Connect demonstration farm, it really makes you question why you do certain things and look at new ideas.

“The answer isn’t always about getting more sheep. For us, I don’t think the farm can hold many more than it does now, so it’s about how we can increase productivity from the same number of head.”

With 1500 ewes over 364ha (900 acres), he acknowledges some might question why not expand numbers. “Yes, there is a surplus of grass in the summer, but we base flock numbers on what the farm can support over the winter without spending a fortune on additional feed or housing. Also, we don’t graze a lot of the hill ground over the summer, as it’s a nesting site for lapwings, skylarks and curlews.”

The existing sheep housing could hold up to 1000 head, but Mr Jones is keen to only use it as a “hospital” for problem ewes, or as an emergency measure if the weather turns unusually bad during lambing. He also fears that having more sheep could be a problem during very dry summers. “It’s a fairly dry farm anyway, so having more sheep could put real pressure on feed and have knock-on effects for the deferred grazing.”

While Mr Jones’s system relies on deferred grazing to cut winter forage costs, he doesn’t rule out investing more time and money if it is right for the business. Last year’s decision to make 160 silage bales as an “insurance policy” in the event of harsh winters is an example of this and Mr Jones expects to do it again this year.

In addition, he is using more high-energy and protein feed blocks and cake than three years ago, especially in the run-up to lambing. “We don’t get much grass growth until May, so feeding cake or blocks up to lambing provides a useful boost. Blocks are quicker and easier to put out, but I find cake is better for the poorer condition ewes as they seem to take in more and I can also easily spot any that aren’t eating.”

However, using more cake does have its drawbacks. Mr Jones says lambs can sometimes lose their mothers in the rush when feed is put out and cake laying in fields also encourages more crows. “We’ve already lost one prolapsed ewe that was attacked by crows and have seen several newborn lambs attacked.” Generally he’ll switch to feed blocks once lambing is fully underway.

Another investment that has proved worthwhile at Tregeiriog is the decision to sow chicory and grass mix. About 6ha (15 acres) went in last year and a similar amount will be ploughed up for it this year. Mr Jones believes putting lambs onto chicory for a fortnight just before they are ready for sale has boosted finished weights without increasing fat content too much. The extra cost of ploughing and re-seeding is worthwhile in the long-term and the only real problem is increasing thistle numbers in the sward, which need spot spraying and topping, he says.

Management of the deferred grazing is one of the main areas for future improvement, Mr Jones says. Because stocking rates are relatively low, swards aren’t grazed as tightly and need extra work to maintain grass quality.

“We’ve tried introducing better grasses, but there’s really too much competition from what’s there.” Everything is topped at least once, normally twice, a year and ideally fields will be harrowed in spring to pull out rough dead grass, he says. “But as soon as you get into May and start tailing lambs or worming ewes, it’s very easy to miss the chance for harrowing before grass growth gets away.”

A small herd of Welsh Black cattle is used to manage grazing on higher ground over winter, for which he receives payment under the Tir Gofal scheme, as it is a nesting site for lapwings.

“Tir Mynydd is a nice £8000 boost at the end of the season, but this will be phased out next year so this will be our last full payment. There’s no similar option for grazing cattle under Glastir,” he adds.

Breed choice also plays a key part in increasing profitability from existing stock numbers and Mr Jones says changes could be on the cards. He wants bigger ewes and higher lambing percentages of 150-160%, something he is struggling to achieve with the Beulahs this year.

“We’re just not getting the crop of lambs we used to,” he says. “I don’t think it’s anything to do with the management, as other sheep are performing much better on the same land.”

Scanning of Beulah yearlings this spring has seen lambing percentages as low as 110%, the lowest ever on the farm, he says. Older ewes have scanned at 145%, while crossbreds have been at 170% and Aberdales at 200%. “If we were to keep more of the crossbred-type ewe, hopefully we’d get better lambing percentages and not have to increase numbers.”

The number of prolapsed and barren ewes has also been higher than normal this year and Mr Jones is unsure why. He fears some problems could be due to recent trouble with domestic dogs worrying sheep. Earlier in February six ewes were killed by uncontrolled dogs and the stress on animals could have caused ewes to abort, he suggests. “It’s such a needless waste and all due to someone not keeping their dog under control.

“The barren rate is up to 9% in the group of yearlings that got chased, whereas the rest are at 3-4%. From people I’ve spoken to, 10% barren seems to be the norm this year for those lambing in mid-April. We’ve got to go to the vet to carry out blood tests to see if there is any toxoplasma infection there.”

Farmers Weekly would like to thank Aled Jones and landowner Rupert Greenwell for sparing the time to take part in Management Matters over the past three and a half years. Mr Jones is also grateful for the opportunity and to those who have taken an interest in his management of Tregeiriog Farm.

Look out for our new Management Matters farm in Wales appearing in June.

• More about other Management Matters farms