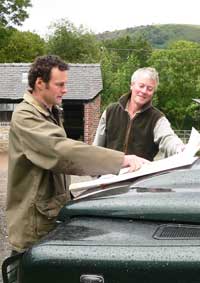 At our Management Matters farm in Clwyd, the new Glastir scheme is already leaving Aled Jones and Rupert Greenwell (left) with more questions than answers.

The new scheme differs from the more familiar Tir Gofal in that it is a whole-farm scheme. Instead of identifying parcels of land on which to base Glastir options, the new scheme applies across the whole area claimed under the single farm payment – 373ha in Tregeiriog’s case.

Glastir requires farmers to choose different land management options which earn points – and successful entry into the scheme means farms must reach a points total worth 28 points/ha. Tregeiriog must garner 10,450 points to qualify.

But much of the Glastir literature sent out by the Welsh Assembly Government has left Mr Greenwell baffled. “The early information we were sent seemed straightforward enough – so I ticked the box on my single payment form.”

Since then, though, interpreting the guidance has been a struggle. “Half the information is on the internet but not everyone uses the web or has access to it. But, more importantly, many of the options under Tir Gofal seem to be missing from the present Glastir literature.”

Mr Greenwell entered Tir Gofal six years ago and has been an enthusiastic supporter of the scheme. A significant element was in choosing options to protect the farm’s native bird species.

“The field officer who did our Tir Gofal inspection was involved with the RSPB and was really thrilled to see the numbers of lapwing and curlew here, and told us it was one of the most important upland breeding sites for these birds in Wales.

“But the lapwing ground here could be seriously affected by Glastir. We won’t be able to have as many sheep on the lapwing sites due to stocking restrictions, nor will we be able to feed concentrates.”

This is crucial to the farming system run by Mr Greenwell and operated by Mr Jones.

The farm supports a less hardy – but more productive – stamp of sheep than a traditional Welsh Mountain ewe on exposed bracken-and-rock – and with careful management of deferred winter grazing and easy-to-handle feed blocks enjoys a better lambing percentage and improved number of lambs reared successfully a ewe.

“The fact that we have the lapwings here in such numbers is, I’m sure, partly down to our type of ewe. A traditional Welsh Mountain ewe, bred to make the most of thin pasture, will take the grazing right down to the bare soil. But the lapwings like the less even, patchy grazing on our land because it offers them some cover.”

Getting to the 10,450 points target will be no mean feat. “Even those options which could, on the face of it, provide a third of our points total will not work with our management systems.”

Potentially, the most attractive option on the Glastir menu would be for grazed permanent pasture with very low inputs – worth 59 points/ha. But the restrictions on stocking density, the hassle of having to maintain a “stocking diary” and, crucially, the ban on supplementary feeding make it seriously questionable.

“With no supplementary feeding, we will not get the grazing right to allow ideal conditions for lapwing and curlew. And I’d rather put them before this scheme,” says Mr Greenwell.

England’s Entry Level Stewardship options include a similar low-input grassland measure, he says, but make no stipulation for keeping a stocking diary or preventing feeding cake or blocks.

“We’ve done a lot of the work that I would have expected to do to reach the points target already. Under Tir Gofal we did a lot of double-fencing of hedges – in fact I’ve only three left to do – but under the old scheme they had to be 2m wide, not the 3m Glastir demands.

“I can’t possibly afford to re-fence the whole farm’s hedges at 3m wide, and it will take a huge amount of land out of useful production anyway.”

Nor does this fencing carry enough points to drive Tregeiriog any real distance towards its points total. Double-fencing broken or uneven hedges only earns 1.3 points/m, with a maximum of 3133 points allowed under that option. And Mr Greenwell reckons 100m of double-fencing and planting will cost him about £1000, but earn only 170 points. “For the number of points I’m going to earn, I can make bird boxes for a fraction of the cost.”

Other Glastir options seem to directly contradict the objectives of other wildlife measures already in place.

“For example, the removal of trees and bushes from overhanging watercourses was to allow more light into streams to benefit insect and aquatic life. But Glastir options include planting trees alongside streams as ‘streamside corridors’,” says Mr Greenwell.

The extent of the changes is likely to dishearten farmers from taking part, Mr Greenwell says. But he’s also unconvinced that Glastir could be the right thing to do for the farm’s long-term environmental future.

One Glastir option Mr Greenwell is seriously considering is to grow spring cereals and retain winter stubbles – worth an impressive 235 points/ha. There’s no possibility of getting a combine up to the Tregeiriog land, but spring barley could at least be mown and baled.

“I don’t want to be the generation that ploughed up this land for a short-term financial gain. In the 1970s we had a big push to establish conifer plantations up here. But it hasn’t worked, they’re far too high to remove economically and I don’t want to make a mistake like that.”

Mr Greenwell is more interested in establishing winter root crops – worth 316 points/ha – but the rules of the scheme mean he cannot exceed 11ha over five years.

If Tregeiriog’s application is successful, income from Glastir and the Whole Farm Code will be worth about £13,210 a year – significantly less than the £15,000 from Tir Gofal and £8400 a year that Tir Mynydd brought in.

And Mr Jones can see that being even less in real terms. “Once capital works like fencing, ploughing and drilling are taken into account – it’s easy to see how you could spend £5000, with seed, lime and fertiliser as well.”

The first information pack arrived in March with details of the demonstration farms. For Tregeiriog, a lot will depend on how much new information is in the pack the Welsh government is issuing to farmers next month. “We need more information, fast,” says Mr Greenwell.

“For instance, can I put Tir Gofal land into Glastir work? Surely I can’t expect to get paid twice, and Tir Gofal payments will continue into 2014.”

Tir Mynydd Replaced the Hill Livestock Compensatory Allowance. Farmers will be able to claim 60% of TM payments in 2011 and 30% in 2012, winding down the scheme

Glastir Replaces all the above schemes