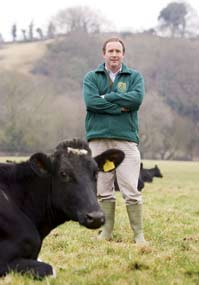 A month into the new milk year and there is little sign of an end to the falling milk prices. Before converting to full organic status, Clinton Devon Farms manager George Perrott had hoped to be getting 35-36p/litre for the farm’s 4m litres of milk, but March’s cheque worked out nearer 32p/litre. Prospects for April and May look little better after milk buyer Dairy Crest replaced its “balancing charge” with a “modulated” pricing system that effectively means almost a third of this spring’s organic milk will only get the conventional milk price (see panel).

“It’s going to force us to produce less now and more in the autumn to try to even up production through the year,” Mr Perrott says. “For us, it means we won’t push the cows as hard by cutting back on the expensive organic protein and feeding as much forage as we can. We have to make every litre as profitable as possible.”

Reducing costs per litre also requires increased efficiency, he continues. “To do that you need more cows per man, which means investing in decent facilities and decent staff.”

Around a third of a million was spent on new dairy facilities and buildings last year, and Mr Perrott is confident the system of two 250-cow herds and nine full-time staff across the whole farm is up to the challenge. There are no plans to expand immediately as he wants 2009 to be a year of consolidation after the recent investment, but he reckons cow numbers could be increased considerably with little or no change to the current system.

Mr Perrott regards good, motivated staff as being central to an efficient business and Clinton Devon Estate has been part of the Investors in People scheme for five years. All staff have an annual appraisal and their own training and development plan. In addition, brief morning meetings focus on the day-to-day issues and every three months everyone is brought together for a breakfast meeting to discuss the farm’s longer-term strategy.

“It gives us chance to update people on what’s going on and the latest legislation, plus it gives everyone chance to voice their concerns, problems or suggestions for improvement,” says Mr Perrott.

“There are always a few gripes people want to get off their chest, but generally we find it’s a constructive way of managing the team. With so much going on it’s important we stop occasionally to look at the bigger picture – it gives us a chance to make sure we set the boat in the right direction.”

The latest meeting highlighted a number of issues, including the need for an alternative way of moving slurry around the estate. “We get more complaints now about slurry than we did about spraying,” says Mr Perrott. “One of the guys suggested setting up a form of waste transfer area away from the villages, where we can pump the slurry to. It’ll mean we don’t have to move it through the villages, but to make it more worthwhile and get the most out of the nitrogen in the slurry we’ll need at least nine months-worth of storage for the two dairy sites. That’s about five times what we have at the moment.” 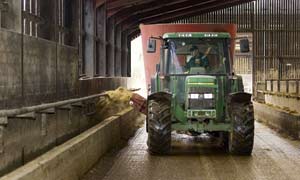 As well as the cost of setting up such a system, Mr Perrott says it is also difficult to find a suitable site away from villages and boreholes, but close enough to the land where the slurry will be spread. However, he is confident it’s the right thing to do. The slurry, together with essential nitrogen-building red clover leys, has removed the need for expensive artificial fertiliser.

“Assuming nitrogen fertiliser’s £280/t, we would have spent £56/acre (£138/ha) on the grassland. And, although we’re not putting any artificial N on, I believe we’re getting more grass yield. The 110-120 acres of first-cut silage we’ve done so far has averaged about 8-10t/acre.”

As well as the main team meeting, Mr Perrott also brings together the two dairymen, stockman and vet every three months to review and plan what is happening about lameness, mastitis and fertility within the herd.

Like so many farms in the south west, TB is an ongoing disease threat and the constant testing continues to have a big labour and financial cost for Clinton Devon Farms.

In all, the farm tests 800 cattle every 60 days, which takes four people about 12 hours. “You then have to go back and re-test four days later, plus there’s about half a day of paperwork on top. Add it all together and it’s the equivalent of one person working solidly for a fortnight, every two months. It’s an astronomical figure for something we’re not getting any compensation for.

“As farmers we love animals and don’t want to see any animal – be that a cow or badger – suffer and die from TB. But to only be killing cows is wrong and is not getting rid of the problem.”

Mr Perrott reckons a more suitable way forward would be for the government to grant a badger culling licence to DEFRA-controlled agents for farms on “severe interpretation” status.

Another concern for Mr Perrott is the rise in rural crime he has witnessed over the last nine months. Last year £4500 was spent on a CCTV system around the main farm yard, plus signs have been erected to deter would-be thieves. Equipment is put away at night and all gates and buildings are kept locked. This year immobilisers will be fitted to all the farm’s tractors. “They’re only about £500 each, which is worth it when you consider the hassle factor if something gets nicked.”

Clinton Devon Farms will be opening its doors to the public during Open Farm Sunday on 7 June. It will be the first time the farm has taken part in the event, although it did hold a similar open day last year following completion of the new parlour. “It was a great success and hopefully if we can get plenty of villagers around this year, it’ll help educate them about what we’re doing and why. Also, if we can show people what we’re doing, maybe they’ll look more closely at where products come from next time they’re in the supermarket,” says Mr Perrott.

To find out more about Open Farm Sunday visit www.farmsunday.org

Dairy Crest wrote to its organic producers last week to inform them it was replacing its spring “balancing charge” with a new “modulated'” milk price. Under the new payment system, organic producers will receive the full organic price on a proportion of their milk and the remainder will be sold at the conventional milk price. The proportions vary month-on-month depending on how much a farm is predicted to produce. The system is biased towards bigger penalties during the spring flush (April to June) to try and even out the production profile.

“If we’re only getting the full price on 124,200 litres, there’s no point trying to push output much more beyond that,” Mr Perrott says. “With the old balancing charge of 3.7p/litre, we got about 32.35p/litre for March’s milk. I suspect the overall deduction will work out about the same under this new system.”