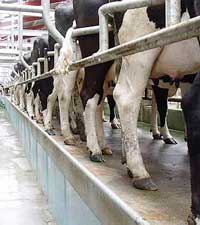 Average farmgate milk prices in the UK fell by 0.51p/litre (2.1%) between January and February, according to latest figures from DEFRA.

However, commodity prices are on the rise, and Northern Ireland’s latest United Dairy Farmers auction saw 45m litres of milk average 25.63p/litre for April delivery – 2.31p/litre higher than in March and 6.8p/litre above a year ago. “The auction produced yet another record-breaking result with the highest March price in the past 10 years, by a substantial margin,” said the report.

World wholesale prices are also improving, with Fonterra’s latest auction seeing price rises of at least 21% between March and April, and whole milk powder reaching the highest level since July 2008.