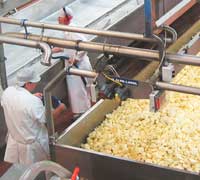 Dairy commodity prices at Fonterra‘s June auction dropped slightly for the second month in a row, with skimmed milk powder down by an average of 6.2%.

Market commentators blamed the seasonal rise in European milk production, combined with the release of intervention stocks and the weakening euro against the dollar. This made European products more competitive on the world market, eroding southern hemisphere values.

However, the European Commission was taking a “little and often” approach to releasing intervention stocks, rejecting all skimmed milk powder bids at its first tender so as not to weaken dairy markets.

Paul Grave of globalDairyTrade, which manages Fonterra’s auctions, said the market continued to be relatively stable. Anhydrous milk fat prices rose by an average of 5.9%, with whole milk powder down by 3.4%, bringing the overall weighted average down by 3.5%.

Fonterra plans to add buttermilk powder to its auctions from August and increase the frequency to twice a month from September. “This will add more depth and credibility and even more transparency around pricing trends,” said the firm’s Kelvin Wickham.