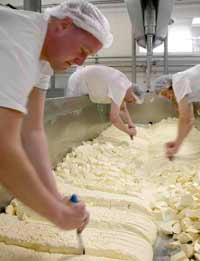 UK cheese sales increased by 5% in the year ending 11 July 2010, compared to the previous year, according to latest data from analyst Kantar Worldpanel. Total cheese sales rose to 404,157t, but prices fell by 2.3% to average £5.96/kg, meaning total consumer spend only increased by 2.6% to £2.4bn.

Volume sales of cheddar increased by 5.8%, with mature cheddar growing at the expense of mild and medium types. But heavy promotional activity contributed to a 3.7% drop in prices, said the report.