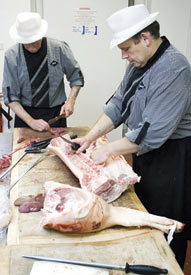 Finished sheep prices have dropped sharply in recent weeks, falling by almost 17p/kg in the fortnight to 3 October.

SQQ values for R3L lambs fell by 12.3p/kg in the week to 3 October to 310.3p/kg deadweight – sparked by the seasonal increase in abattoir throughputs and low retail demand. However, prices were still 17.1p/kg above the same week last year. EBLEX estimated GB prime sheep slaughterings to be 338,000 head in the week to 26 September – a weekly rise of 6%, and nearly 8% higher than the same time last year.

Fresh and frozen sheepmeat exports from January to July increased by 5%, year-on-year, to 48,000t. Aided by the weak pound, trade increased by 24% in value terms, to £173m, said EBLEX. “The volume shipped to France fell by 2%, to 33,000t, but there were marked increases to smaller markets, notably Belgium, Germany and Italy.”

Imports rose by 3% over the same period, to 83,500t, while the value increased by almost a quarter, to £274m. “Import volumes from New Zealand were 6% higher, despite tight lamb supplies, as product has been diverted to meet demand on the high value UK market.”