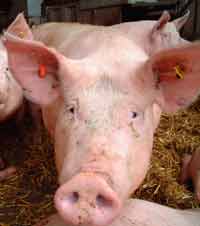 GB sow prices have risen by 10% in euro terms since the beginning of January, to almost 102p/kg liveweight in the week ended 6 March for export specification carcasses.

That is the first time that British sow prices have exceeded 100p/kg since last December, but it is still 14p/kg below the same week last year, according to the AHDB‘s market survey.

“Sow cullings are running 12% higher than in 2009,” it says. “The latest census results suggest that with the large increase in both in-pig gilt and maiden gilt numbers producers are replacing their older sows with younger gilts.”

Despite the rising market, British prices have been generally lower than those in Germany this year. “In Germany, prices rose by 10% between early January and mid-February, but they have weakened slightly and the gap has now closed.” German prices are still 3% higher than a year ago, at €1.14/kg.

In Denmark, sow prices are around 20% higher than at the beginning of the year, but 2% below a year ago, while Dutch prices are the same as last year, having recently weakened to €0.95/kg.