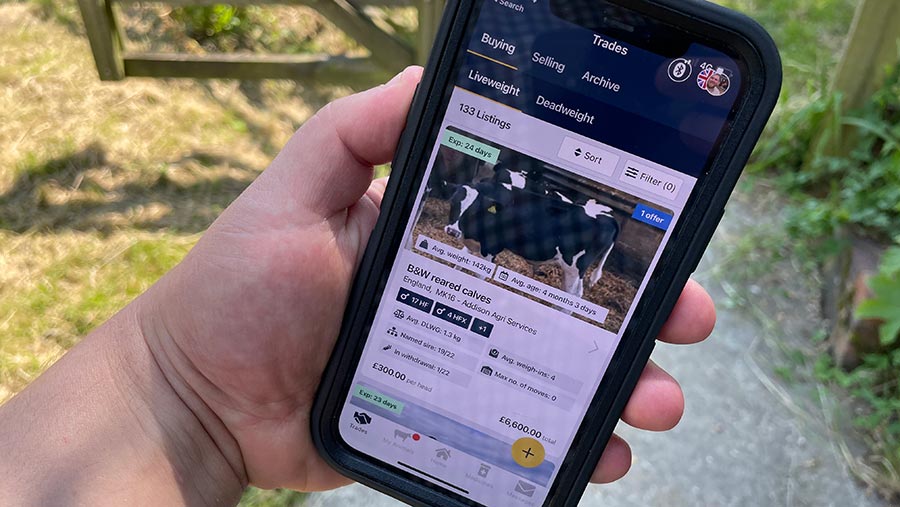 Cattle worth more than £1.85m have been sold on a new trading platform launched by the free herd management app Breedr.

Since February, farmers have sold 2,912 cattle through the tool: 2,475 liveweight and 437 deadweight.

Stock are listed on the app with their movement history, weights, growth rates, medicine usage and photo.

The Breedr team said it allowed producers to buy and sell from other farmers with certainty, with a price guarantee in case of any differential in the weight of weaned calves and stores between farms.

Sellers are also ensured payment within 72 hours of collection.

Ian Wheal, Breedr’s founder, said: “We are delighted that farmers are finding it so easy to buy and sell through the app.

“Feedback has been incredibly positive, with sellers enjoying the speed and ease of selling stock and purchasers buoyed by the confidence that buying based on actual weights gives.”

On average, vendors have received 99.7% of their asking price and animals have sold within five days of listing, according to Breedr.

The average lot size is 14 head, totalling £11,530, with stock ranging from weaned calves to stores and finished cattle.

Tom Samuel, who buys and sells about 750 head of cattle a year at South Lendon Farm near Exeter, Devon, recently listed a group of 46 steers and heifers on the app and sold them within days.

“The cattle were collected within a week, the customer was delighted with them, and Breedr paid directly into my bank within 72 hours,” he said.

Cheryl Reeves rears 600-700 Belgian Blue, Aberdeen Angus and Friesian calves a year at Woodcroft Farm, Wrexham, Shropshire, and has enjoyed the time saved from selling through the app.

“Putting up an advert takes 15 minutes at most, and it’s great not having to take a day off work, go to market, come back and wash the trailer out,” she said.

“It’s so worthwhile having the customer or their haulier come here to collect instead.”