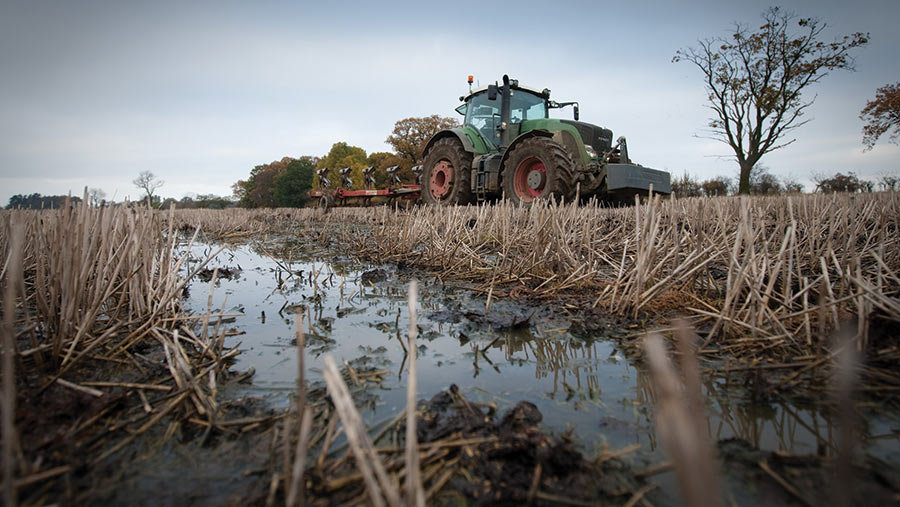 The relatively stable situation that largely defines global markets at the moment could not be in sharper contrast to the turmoil that UK grain production finds itself in.

As if Brexit delays, imminent elections and a strengthened pound were not enough for markets to cope with, continuing wet weather has added real concerns over 2020 wheat production and the balance of UK cropping.

However, a healthy supply-and-demand story across the world and little evidence of any serious weather events capable of tempering this are keeping prices under pressure.

Concerns over US corn plantings came to little after the short-lived rally they created in the summer, and apart from a few unknowns over the Australia harvest, the global picture is pretty much resolved.

There is an abundant supply of wheat in the world, with November’s USDA report showing production decreases in the US, Australia and Argentina largely offset by gains in Russia, Ukraine and the EU.

The sluggish export pace of Russia’s 75m tonne wheat crop means it could still exert pressure on markets into 2020, but with record global wheat ending stocks and little fear of shortages, the only real source of incremental demand could be a US-China trade deal.

Estimates of the 2019 UK wheat crop currently stand at about 16.3m tonnes. An exportable surplus of 2.2m tonnes has been widely predicted along with a significant carryout. However, as the challenging autumn plays out, this is up for debate again.

For a start, a trade nervous of the 31 October Brexit deadline worked hard to ship 700,000t by the end of October – representing one-third of the wheat surplus in a third of the season.

At circa 900,000t, barley exports have been even more brisk. Since the start of November, however, fresh export trade has been minimal. With the recent strengthening of the pound, UK wheat is now starting to look expensive against competing origins.

Some shippers have even sought Danish wheat to cover their December/January sales as it is cheaper than buying UK farm grain.

Delayed autumn drillings have been pushing UK prices higher as the prospect of a tight 2020-21 season and a return to the UK being a net importer becomes an increasing reality.

UK already trading at a premium to French wheat

The implications of this are significant. For example, in a season of high exports, UK wheat futures trade at a discount to France’s MATIF in order to remain export competitive.

Conversely, in a season of net imports, it moves to a premium. The recent new crop rally has taken this fully into account and, with November 20 futures in London at a premium to Paris, there may remain little scope for this premium to widen further.

The relative strength of new crop prices will inevitably encourage growers to store grain into next season, which could limit exports this year and result, potentially, in a record carryout.

Low domestic yields against a backdrop of high global supply is not a good situation to be in and our short-term weather issues could well prove to have long-term implications to UK growers.

Red: Factors putting downward pressure on prices – accounts for 50% of current market influence
Large global supply and demand situation dominates world markets and, as yet, there is no sign of the type of new crop issues we are experiencing being repeated at any serious international scale.

Amber: Watch this space – 30%
Still some questions marks over final size of Australian harvest, final yields of late-harvested US corn fields and how South American weather develops. US-China trade deal still to be determined. UK general election outcome could have a major influence on sterling’s value.

Green: Factors exerting upward pressure on prices – 20%
Like the UK, French wheat plantings have been delayed and 2020 EU production could end up lower than anticipated, but these are small beer compared to the overall world supply situation.