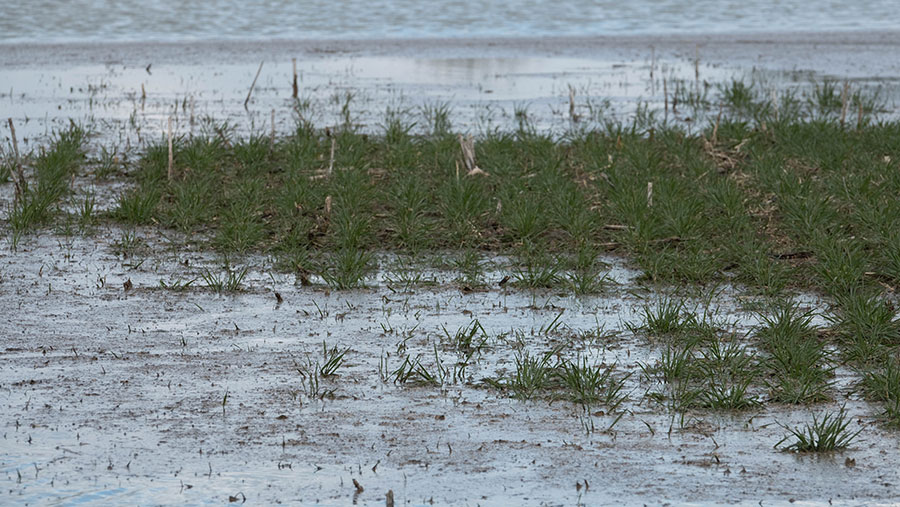 New-crop grain prices have climbed as the rain keeps falling, with harvest 2020 values for feed wheat ranging from £143-£153/t.

Trade estimates put the 2020 wheat crop at just 10-12m tonnes, removing some of the pressure to export grain from the 2019 crop.

Drilling is also behind schedule in France, as well as Germany, although to a lesser extent.

A price spread of about £25/t between old-crop spot values and the March 2021 futures price of £163/t (12 November) means that at current values, those who can fund the cashflow wait are better off leaving wheat in the shed until well into next season than having the cash in the bank now.

More wheat to carry over

Up to 1m tonnes more than originally planned is now expected to be carried over from this year’s harvest.

New-crop futures have been on a rising trend since early September, when the November 2020 London feed wheat contract was at £140/t. By early November, it had topped £159/t.

“London wheat futures have increased by £20 relative to Matif in the new-crop positions over the past five weeks,” said Saxon Agriculture grain director Mark Smith. “As such, we are not competitive to export wheat in the 2020-21 season.

“Premiums [over the futures] into deficit regions have increased, and in the north of England, we are now close to import parity…this ultimately puts a limit on how high domestic prices can go.

“Barley markets lack definition for new-crop, but are talked around £22/t under wheat.”

“Farmer activity has slowed, with little or no selling of new-crop, though marginally more on barley.

The new-crop November 2020 Liffe feed contract is definitely pricing in a “poor” 2020 harvest, and the UK will likely be a net importer of wheat next season, so the pain of any hard Brexit on domestic prices would be softened, as the UK would need to preserve stocks, said Benjamin Bodart of analyst CRM .

Traders caution that things could change very swiftly if the ground dries and good conditions return.

Even with better weather, most expect a smaller wheat area for next year’s harvest and a jump in the spring barley area.

As well as the rain, cold temperatures and reduced daylight will not help the prospects of the 2020 wheat crop, said Mr Bodart.

“Overall, it is estimated that wheat plantings are just about 40-50% complete in the UK. We still have a tiny bit of time, but the weather forecast is far from ideal.

“Assuming a 10-year average yield of 7.9t/ha, once again optimistic based on the current conditions, the 2020 UK wheat production could be down more than 4m tonnes on the 2019 harvest, to 12.2m tonnes,” Mr Bodart said.

“Additionally, we could see milling premiums for new season well supported, with the core producing region of the Midlands severely affected, while spraying programmes are also delayed on emerged crops.

“Based on last season’s prices, it makes sense to commit some of the 2020 wheat harvest at current levels without being too aggressive,” he said.

“Interestingly, we also need to remember that the UK is a fairly small player. Back in 2012, the November 2013 Liffe feed wheat contract peaked at the end of November 2012 after a 16% rally in price – or £28/t – from early September.

“The reduced UK winter wheat planted area will undoubtedly result in higher spring barley plantings – difficult to quantify just yet – with prices of the latter cereal, without considering the negative effect of a hard Brexit, the most at risk of significant pressure in the months to come,” Mr Bodart said.

“That is why we have been more aggressive on forward selling feed barley with the £140s available for spring 2021 delivery, but farmers are now very nervous about overselling.”