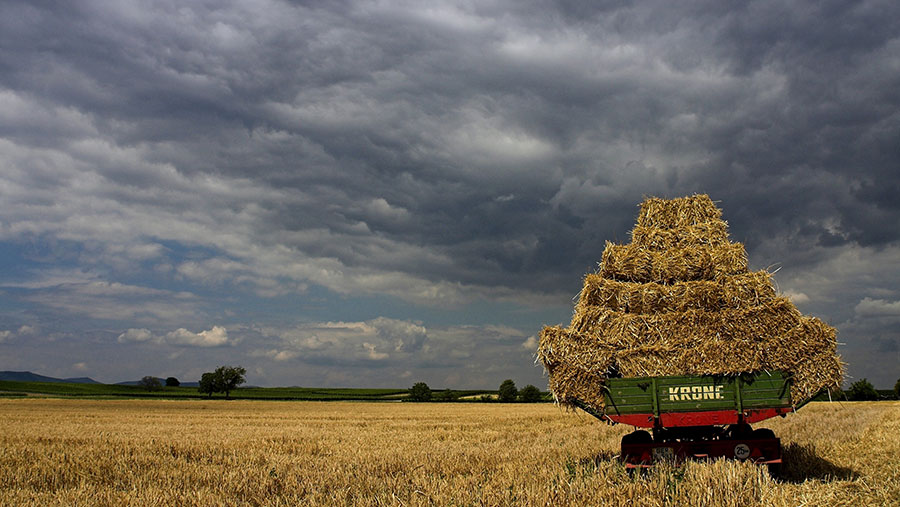 Most arable and livestock production is expected to be lower than average for the next two seasons across the EU amid bad weather and significant price pressure.

The EU Commission’s Short-Term Outlook report covers production for the 2018-19 and 2019-20 seasons and suggests that Brexit uncertainty, lower growth in the major EU economies and further escalation in tariff wars will result in decline for some sectors.

Overall the arable sector – covering cereals, oilseeds and sugar – will contract to cover about 70.7 million ha across the two-years.

For livestock producers, beef and sheep are expected to see declines, while pigmeat will grow slowly, amid African swine fever risks and environmental constraints. However, milk production is forecast to rise.

The sector-by-sector forecasts are as follows:

Early dry weather and a mild winter in 2018-19 appeared to be a boon for the crop.

Now, though, the central swathe of Europe into Russia is experiencing dry conditions that may hold the crop back.

Global wheat and maize production are expected to fall, with EU cereals output forecast to plummet to a seven-year low at 290.5m t in the 2018-19 season.

However, production should recover the following year, but only to a projected 307m tonnes, which remains below the five-year average.

The world market price for soya beans declined by 8% between March 2018 to March 2019, after the crop became the focus of US-China tariff battles and global production rose by 5%.

Overall the area under oilseed cropping has declined by 6% in 2018-19, due largely to drought across Europe affecting rapeseed crops.

Oilseed output is expected to recover in 2019-20, with only a minor production decline of 0.4%, yielding close to 33m tonnes.

Despite a world market surplus, estimated at just 0.6m tonnes, white sugar prices have not recovered.

This is likely to result in a reduction in area of 60,000ha for the 2019-20 marketing year compared with the previous year – a decrease of close to 4%.

But the disease outbreak in China, and the resulting increase in demand for imports to fill the production void, are expected to raise EU exports in 2019-20.

After exports to China fell by 8% in 2018, analysts are predicting a 9% increase in the coming 12 months.

This should bolster prices, according to the outlook’s analysis, but it suggests ASF risks in Europe and environmental legislation will continue to hold back production across member states.

Sheepmeat production is expected to continue to fall by 1% in 2019, after a similar decline in breeding flock numbers and poor lamb survival figures in 2018’s adverse weather.

While prices were down by 4.3% in the first months of 2019, the reports suggests prices will firm through 2019 with the lower supply across the EU.

A lower level of imports from New Zealand, which has concentrated on Asian markets in the past few years, should also help stabilise prices for EU-produced sheepmeat.

However, the cold winter in northern Europe and the summer drought across the EU led to feed shortages, low calving rates and early cow culls.

EU cattle herds shrank by 1.3%, with 100,000 fewer beef cows across France, the UK and Ireland, and a reduction of 375,000 dairy cows in the Netherlands, Italy, Germany and France.

As a result, production is forecast to reflect the drop in numbers, with a decline of 1.3% in output.

The limited supply may put upward pressure on prices in 2019.

Despite the effect of the drought, a fall of 1.6% in dairy cow numbers and a 2% drop in breeding heifers during 2018, yield increases led to a 1% rise in milk production.

Output was driven by higher compound use that saw yields rise by 2%. The production increase is predicted to continue through 2019, with an expected rise of 0.7%, the report says.

As with other markets, the US-China trade battle has opened up potential export outlets for EU-produced dairy products.

Exports to China rose by 11% to account for one-quarter of the country’s dairy imports in 2018. Much of this (60%) was in whey powder shipments.

In 2019, further world import demand growth is expected and EU prices should remain stable as a result.

Read the report in full on the EU commission website (pdf).