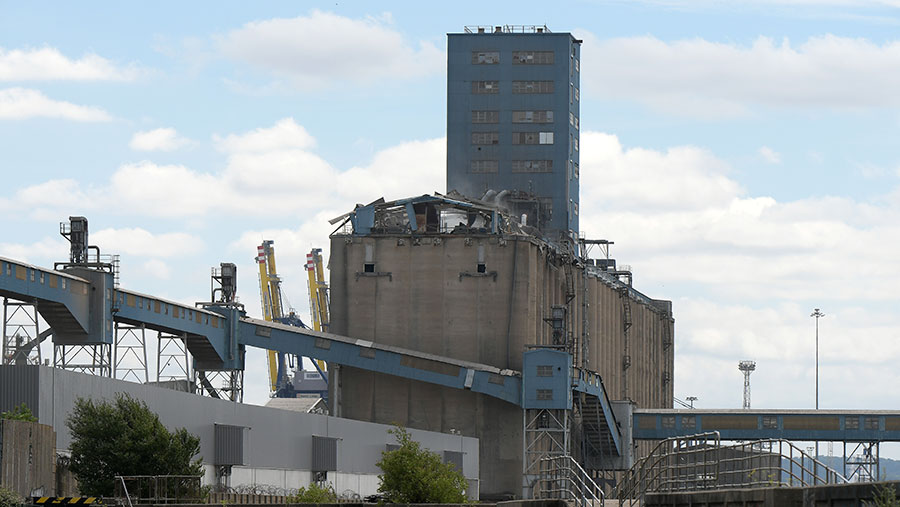 Further fires have followed the damage caused to the Port of Tilbury’s grain operation by an explosion and fire on Friday (3 July).

In the initial incident, the roofs were ripped off several silos and grain caught fire. Several further grain fires occurred two days later, requiring 15 fire crews, with some still at the site on Wednesday (8 July).

The port is the largest combined import and export grain terminal in the UK, capable of handling vessels up to 70,000t.

It has an annual capacity of 2m tonnes, split evenly between import and export operations.

A statement from the Port of Tilbury said: “The cause of the initial explosion will be the subject of a thorough investigation by the relevant authorities and we expect that it will be some time until the results of that investigation are know. The remainder of the port is fully operational.”

There is huge pressure to get grain, and in particular barley, exports away from the UK in the next few months as the UK’s EU exit transition period draws to a close. However, it is not clear how long the facility will be out of action.

Several of the main merchants use the port and, in 2015, Frontier Agriculture signed a grain terminal partnership with Tilbury.

Merchants that use the port are unwilling to discuss the implications of the incident, with Frontier directing enquiries to the port.

“Frontier will work with the port in order that any impact on Frontier’s normal activities to support farmers is kept to a minimum and alternatives are sought where appropriate,” said a statement from the merchant.

The firm has other import and export facilities along the eastern and southern coastline of the UK, including Hull, Southampton and Boston Silos in Lincolnshire.

The incident follows an explosion at ADM’s oilseed crushing plant in Erith, Kent, on 19 June. The plant’s owner says it will resume operations as quickly as possible.

In the meantime, oilseed rape deliveries that would have been bound for Erith are being diverted to other plants at a relatively quiet time in the season.

Traders say relatively firm prices, combined with yield uncertainty, means relatively little ex-farm business has been done for July, so the pressure on the Erith plant is less than might otherwise have been the case.

ADM is reported to have been honouring contracts with imported material being made available out from Avonmouth and Teignmouth.