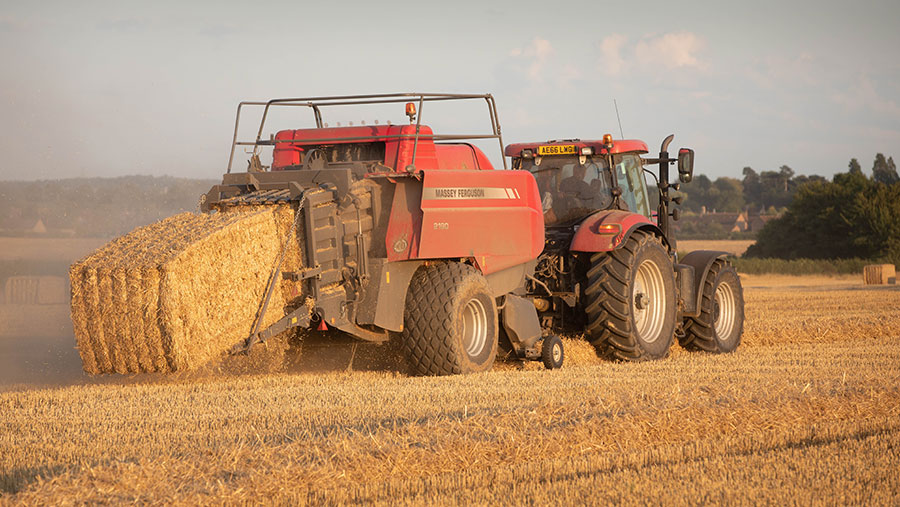 Early standing straw sales have shown huge variability, with average prices spiking sharply in some regions, but only marginally up in others. This shows buyers are only prepared to pay top money for quality crops in the right location.

Somerset-based Greenslade Taylor Hunt sold more than 3,100 acres of straw through online auctions held over two evenings at the start of the month and saw average prices surge compared with last year.

Auctioneer Tom Mellor said despite the weight of straw crops looking lighter than previous years, prices were much higher.

“The averages realised are nearly 60% higher than last year, which, taking into account some vendors suggested their crops were 25% lighter this season, the straw crop value has jumped considerably on the year.”

Wide range of prices in Dorset and Hampshire

Mark Northcott of Symonds and Sampson said trade had been solid at its sale of 6,500 acres covering an area starting from Dorset and moving across to Andover in Hampshire, although prices were not as dear as some had predicted.

“It varies tremendously from area to area. In a heavy stock area, it is going to be dearer than if you travel further east,” he said.

“The crops would also vary a lot this year, so there was also more variety in the density and quality of crop.”

Less for sale in Shropshire

Ben Baggott, director with Barbers at Market Drayton Market in Shropshire, said the 650 acres sold at its sale on 2 July was only half the acreage it would normally expect to have available.

But despite this shortfall, trade was not as buoyant as everyone had been expecting.

“Everyone had talked the straw [to be] very dear, but it was probably about £8-£10/acre more, on average.”

Adrian Cannon of Tayler and Fletcher said its sale of 500 acres at Shipston on Stour in Warwickshire on 1 July resulted in “fair prices”, with the season significantly affecting yields.

Winter wheat sold for an average of £42/acre, winter barley for £46/acre and spring barley for £33/acre.

“The yields of straw are highly variable given the season, with late planted crops thin in the bottom and limited in yields the prices fairly reflected it.”