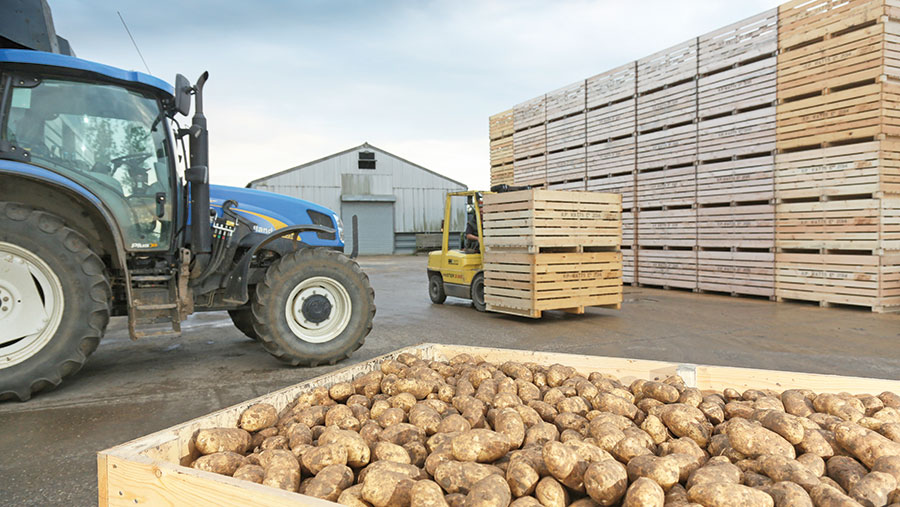 Frustration is growing at deductions from potato packers and processors of up to 30% on farmers’ deliveries, with little or no explanation.

In addition, producers are having to wait up to six weeks to find out about the penalties – giving no chance to remedy any problem in subsequent loads.

This is now the issue everyone is talking about, said NFU potato forum chairman Alex Godfrey, warning it could inflict long-term damage on the sector.

“It is absolutely critical that growers get full, clear, itemised breakdowns of deductions so they can understand where issues are occurring on farm,” said Mr Godfrey.

“It is not good enough to expect growers to simply accept levels of deductions like this without reasonable explanation.”

The problem is widespread, he said – in an NFU call for information last autumn, responses representing several hundreds of thousands of tonnes of the 5m-6m tonne crop were received.

“We know the packers and processors are not going to take all the potatoes, but there is often no explanation of the difference between the weighbridge weight and the paid weight, and sometimes that’s quite a large difference,” he said.

There are only about 1,500 growers left in the sector in England and Wales and about 500 in Scotland.

“They are pretty serious about it and are always looking to make improvements – they don’t want to send unsaleable material – there is the potential to improve the industry if the information can be better,” said Mr Godfrey.

A further issue is that processors and packers are increasingly finding secondary uses for material they cannot put through the intended channel, but growers are not benefiting from this – instead, they are losing the whole of the value of the deducted portion of their consignments.

The NFU is calling for information on the level of deductions and the reasons for them to be given to growers as soon as possible, but in any case within 48 hours of delivery.

Growers can also contact their buyers and ask for this once loads have gone in. Mr Godfrey also urged growers to visit processors to improve relationships and better understand what was required.

Its response was that trade associations did not discuss anything relating to this issue.

Have you been affected by deductions on potato consignments? Contact suzie.horne@rbi.co.uk