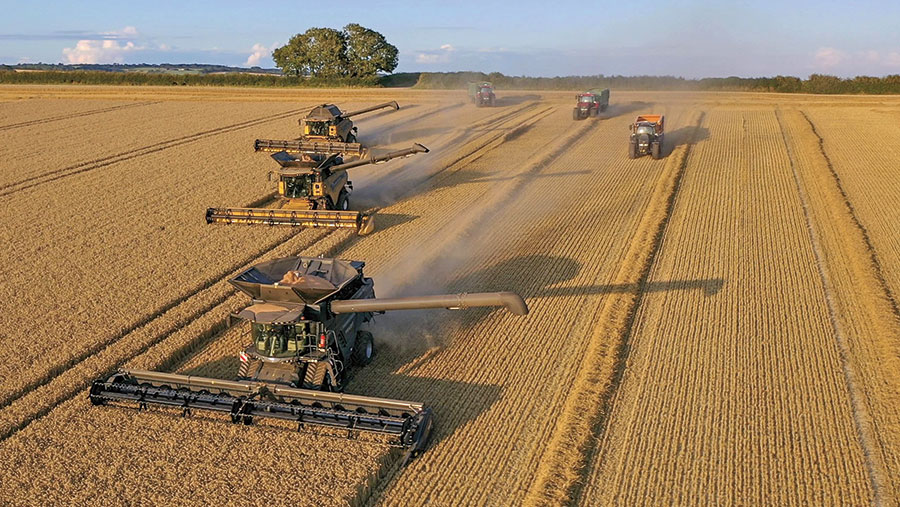 Grain prices are falling as harvest pressure builds, against the background of a potentially very short export window before the UK leaves the EU.

As an improved weather outlook allowed harvest to resume, good wheat yield reports continued this week, although some areas have quality concerns.

Regional ex-farm week spot feed wheat prices collected by Farmers Weekly on Wednesday (21 August) showed a drop of almost £6/t over the week, to an average of just over £124/t.

See also: So you want to …get into contracting

The regional average ranged from £121/t in many midland, eastern and south-eastern counties to £134/t in north-east Scotland.

At Frontier Agriculture, Philip Kimber said wheat exports were moving to traditional destinations such as Spain, Italy and Ireland, but with a large crop on the cards and 31 October looming, domestic consumers were sitting back for the time being.

The full -spec milling wheat premium moved up only a few pence this week to average £14.90/t, reflecting market relief at the better harvest weather.

Barley exports are continuing at a smart pace, but while the UK is competitive on wheat export markets, demand is sluggish.

“There are no quality issues on feed barley, but we’re beginning to see some germination issues with malting barley in patches.”

Domestic feed barley demand is modest – with plenty of grass about, livestock producers are not chasing it, said Mr Hoyland.

The AHDB estimated 27% of the UK wheat harvest was complete before the recent rains.

While there are fears for quality on some of the remaining bread wheats, the German wheat harvest was 90% complete, with good quality, which will limit the scope for UK bread wheat premiums to rise.

EU grain exports are slow compared with last year, and Russia remains the world’s most competitive source of feed wheat.

There will also be pressure for Ukraine to export 5.5m tonnes more wheat this season, as its harvest is expected to rise by more than 11% to almost 28m tonnes.

Sterling strengthened against both the euro and the US dollar last week and midweek was worth €1.09.

On a wider front, the latest statistics on US maize show a larger area than the previous season, with a higher predicted yield.

However, development of the late-planted US maize crop is behind average, and with a greater proportion of the crop planted later, there is an increased risk for wider frost damage, said AHDB Cereals and Oilseeds.

Harvest pressure is evident here too, with September and October offering a better carry than this market has seen for some time, at about £4/t a month.

However, the outlook is firm, as European futures record new contract highs.

A recent rise in EU tariffs on Indonesian palm oil has helped rapeseed oil prices reach their highest level since November 2017 in Rotterdam, said the AHDB.

There is uncertainty over the potential yield of US soya bean crops, as early crop inspection reports show lower-than-average pod-setting rates.

However, reduced Chinese demand for soya beans as a result of African swine fever losses and huge rises in Ukraine’s oilseed rape production and Argentina’s soya bean crop are further factors in the market mix.