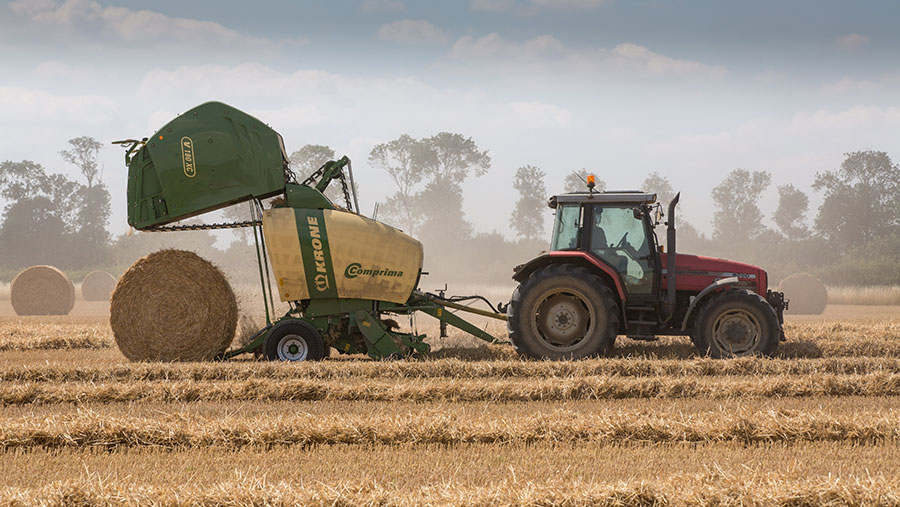 One of earliest standing straw sales of the year saw winter barley average just under £130/acre – about £30/acre more than the equivalent sale a year ago.

The sale of 277 acres of standing straw by West Country-based Stags at Affeton Castle, East Worlington, Devon, also saw the price of winter wheat straw rise significantly from an average of £66/acre in 2020 to £110/acre in 2021.

The highest price paid was £138/acre for a lot of winter barley straw.

Tom Mellor of Greenslade Taylor Hunt said he was selling 3,500 acres of straw from around Taunton, Devon, over two evenings next week (28-29 June).

Supplies were looking better this year because more winter crops had gone in the ground and crops were generally looking quite a bit heavier than a year ago.

“They could yield perhaps 40-50% more than last year so, in reality, there is going to be more on the market even though the acreage for sale is very similar,” he said.

Demand was likely to be strong, he said, as his feeling was that most livestock farmers’ barns were pretty empty.

“The winter we have just seen –  I have never known straw start so dear and continue that way all the way through. To me, that suggests that livestock farmers have been quite hand to mouth.

“I think average prices could be very similar to last year – although it might be better value for money for the buyer because they are heavier crops.”

Andrew Wallace of Cheshire-based Rostons said the firm was planning a timed auction from 5-14 July.

Farmers who had put crops forward were hoping for prices at similar levels to last year – which in the Cheshire region was about £70/acre for barley and £60/acre for wheat.

“I think they will achieve that, as there is quite considerable demand for straw power station orders, which larger producers in eastern counties are supplying. This is leaving a bit of a shortage in some cases for dairy and beef farmers on the western side of the country.

“Winter crops are looking reasonably good if they were drilled early, and it looks as if there will be a reasonable amount of straw off them, as long as they are combined with a traditional combine.

“Some of these newer combines tend to trash the straw, so we are finding some potential buyers want to know what combine is being used before committing to buying straw in the swath.”

“UK cereal crop yields are looking much better than they were earlier in the year and, providing weather conditions do not change adversely between now and harvest time, the signs are that ex-farm merchant buying prices of wheat and barley straw in the cereal-growing areas of the country are likely to be in the £60/t region at harvest time,” he said.

“Straw remains an important factor in the economics of pig production, in particular. High-welfare systems are dependent on straw for outdoor sow units as well as for indoor straw yard rearing and finishing. This pays premium prices to producers, providing they have ready access to large volumes of straw, preferably stored under cover to reduce wastage levels.”