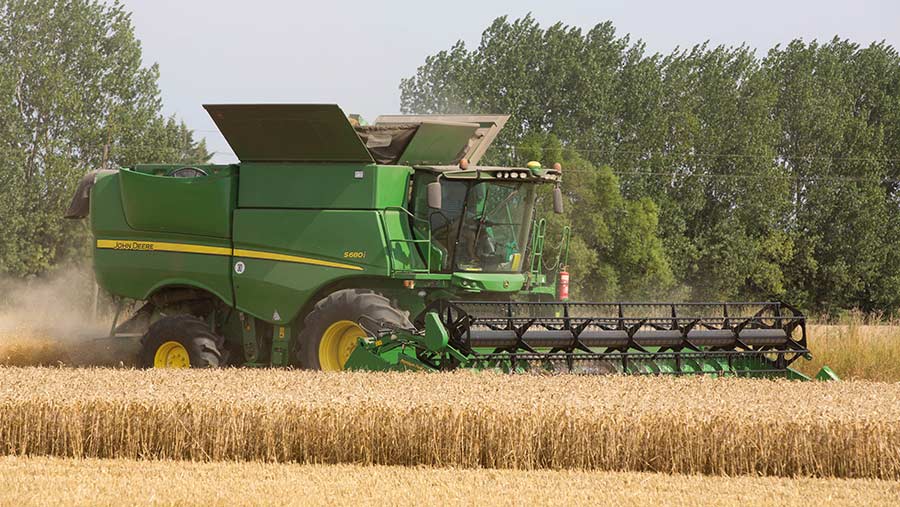 Huge global demand and widespread dry weather concerns are contributing to a volatile grain market ahead of harvest.

The release of the latest US Department of Agriculture (USDA) report on Friday 9 April saw the UK feed wheat old crop futures price (May 2021) close at £196/t, an increase of £7/t on just a few days earlier.

Charles Roberts, a Kent-based grain trader at Cefetra, said locally there was little wheat and barley left on farm unsold.

Good demand remains for feed wheat, which could be the home for some of the lower spec milling wheats in the run-up to harvest.

“There is still a £25/t gap between July old crop and August new crop wheat, which is relatively large at this stage of the season and I would expect that to narrow at some stage,” Mr Roberts said.

“Growers have sold some wheat forward at between £150/t and £160/t ex-farm for November. However, that has slowed up recently with concerns over dryness here in the UK and other regions of the world.”

The supply and demand document reported that maize stocks had been cut to their lowest levels in seven years on the back of a forecast increase in consumption and increased exports, causing maize futures to rally to an almost eight-year high, according to the AHDB.

China’s Ministry of Agriculture raised its maize import forecast for the 2020-21 season to more than double the previous estimate, up from 10m tonnes to 22m tonnes.

Despite this large jump, supply and demand is expected to stay balanced in the short term, keeping prices stable.

Customs data for China highlighted the country’s huge level of demand, the AHDB said, with maize imports during the first quarter of 2021 at 6.73m tonnes, up more than fivefold on last year.

Meanwhile, imports of soyabeans in March were up 82% year-on-year.

The report was more bearish for wheat based on an expected rise in Russian production for harvest 2021, the AHDB added.

Russian agricultural consultancy Ikar increased its wheat production forecast from 79.8m tonnes to 81m tonnes, as the result of a period of favourable weather across the Black Sea region.

“The world is a very hungry place and the pressure is on farmers to produce record cereals crops, so that’s a supportive feature in the market,” he said.

“Despite us having a record cereal harvest this year globally, now that we’re three-quarters of the way through the season we’re coming to a relatively low stock base situation.

“That’s why we have got this big differential between old crop and new crop prices and at some point this does have to be bridged.”

Mr Smith said farmers had generally responded to the relatively high prices of cereals this year by planting more grain, so it was likely the next season would see an increase in production.

“We now need the right blend of rain and sun in the run-up to harvest and that is a concern at the moment,” he said.

“The dry conditions here are putting farmers off selling grain forward so there’s less grain coming into the market which also helps support the price.”

This is true outside of the UK as well, particularly in North America. More than 70% of the state of North Dakota, which produced 8.5m tonnes of wheat and 6.2m tonnes of maize in 2020, is now considered to be in “extreme drought”.

“Grain markets are wrapped up in a whole pile of stuff like politics, but the weather always has the final say and it is definitely a concern,” said Mr Smith.

“We are going to see some real extreme price volatility now in the April and May period and I think it’s going to be a very lively next few months.”

Farmers should be fully focused on global political and crop development issues in the near future, Mr Smith advised.

China’s recent demand had been “phenomenal” as it worked on rebuilding the domestic pig herd following the devastating effect of African swine fever, and one concern is whether this demand will continue.

“They have been very determined buyers of cereals over the last six months and it is hard to see that demand will suddenly fall away,” Mr Smith said.

“Farmers need to keep a close eye on that because China is not only a big buyer of grain but also accounts for a huge percentage of stocks held worldwide.

He said the Black Sea region remained significant, with the ongoing issue of Russia’s export taxes having a bearing on wheat prices at harvest, and with Ukraine being a massive influencer on the maize market.