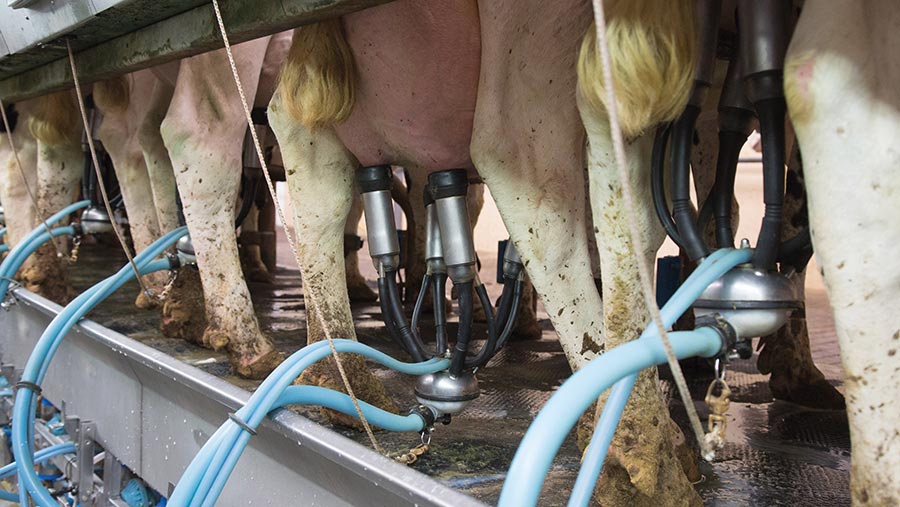 Costs of production continue to rise for the dairy industry, with feed, labour, and fuel costs all high and farm businesses feeling the pressure.

Aligned milk contracts have been playing a key role since their inception in 2007, their major purpose being to offer a cost-based pricing model for retailers, processors and producers.

In recent years, aligned contracts have faced scrutiny from some industry bodies and producers who feel they are imposing too many regulations on farmers and create an imbalance of power.

See also: Dairy Contract Reform: How did we end up here?

These contracts hold strong PR value for retailers, who use them to show that a “fair price” above cost of production is being paid to their producers through these schemes.

The two major aligned liquid milk contracts are provided by Tesco and Sainsbury’s.

Other retailers such as Marks & Spencer and Waitrose also offer aligned contracts, however these account for a much smaller share of the market.

Overall, it is estimated that around 16% of milk production goes into aligned contracts, according to AHDB figures.

The Tesco Sustainable Dairy Group (TSDG) was established in 2007 and since its formation has worked with more than 600 dairy farmers across the UK.

TSDG works by paying producers a set price for their milk, based on costs of production.

An independent agricultural consultancy is used to determine costs of production every three months.

This takes into account changes in on-farm costs, including prices for feed, fuel, and fertiliser, and from this a price is set for the next three months.

Sainsbury’s Dairy Development Group (SDDG) was also formed in 2007 and includes about 290 farms across eight regions of the UK.

Like Tesco’s aligned milks contracts, the SDDG operates on a cost-of-production model, with adjustments made quarterly.

Sainsbury’s currently works with a range of processors, including Muller and Arla, and its scheme is costed by Kite Consulting.

One of the most common criticisms from milk producers of aligned milk contracts is the degree of regulation imposed by retailers on how farms operate.

In order to be part of the milk groups, each farm business must abide by codes of practice imposed by the retailers.

When they were first formed this covered farm standards, milk recording and animal welfare requirements.

Over time, the level of regulation has increased to not only cover animal health and welfare standards, but also farm management practices such as more emphasis on the environment, carbon footprinting and antimicrobial usage.

Some producers see this as overly restrictive and an imbalance of power by the retailers. Farmers must abide by all these standards or face being removed from the aligned milk groups.

In some cases, the extent to which the farms comply determines whether they can remain in the group on an aligned contract, with the bottom 10% of farms at risk of removal from the schemes.

NFU chief dairy adviser James Osman says: “We want to see relationships in the dairy supply chain improve, and aligned contracts have a role to play, creating long-term stability and allowing for investment by farmers who have the certainty of a relationship and a pricing mechanism that potentially reduces volatility.

“For retailers it gives them a point of difference and allows them to work with a group of dedicated dairy farmers on a long-term basis.

Over the long term, aligned milk contracts have been shown to on average to pay a small premium above the standard litre price for milk.

Kathryn Rowland, senior farm services manager at Kingshay, says: “The value of the aligned milk contracts is that it gives stability, so you haven’t got the peaks and troughs of some of the non-aligned contracts.”

Kingshay is involved with Waitrose and Barbers contracts, as well as some other smaller processors.

This price gap had widened from 1.87p/litre during the previous year.

The stable nature of aligned milk contracts also enables farmers to avoid a level of market volatility and know how much they are going to be paid for their milk several months in advance.

This helps farm businesses plan and invest in their infrastructure and equipment.

Promar International has been providing Tesco with dairy industry analysis and costings for its aligned milk contracts for more than 10 years.

Its cost tracker is used to aid Tesco’s aligned contracts with Muller and Arla.

Matt Sheehan, principal consultant and TSDG programme director at Promar International, said: “TSDGs started back in 2007, following a period of very low farmgate milk prices, when prices were below costs of production.

“Tesco decided to institute a supply group that could be looked after from a milk price perspective, and which would supply them with milk that they know was coming from a trusted source. It became a large segregated and aligned milk pool, with a cost of production-linked milk price underpinning it.”

Mr Sheehan said the group has declined from 750 farms at its inception in 2007 to around 530 farms today.

However, group milk throughput has remained around 1.3 billion litres, as average herd size and average yields a cow have risen.