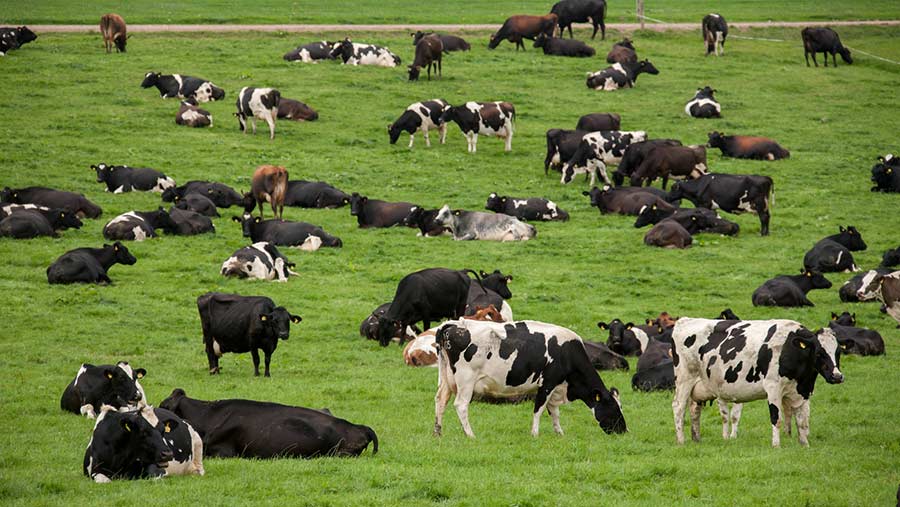 Struggling dairy farmers are being asked to carefully document their financial losses after the government said there was not yet credible data that the sector needs a coronavirus bailout.

In a series of calls last week between Defra, farming unions and dairy bosses, the department ruled out an NFU grant funding request for affected farmers, as it said it was not supported by accurate and credible supportive data.

This has prompted the Royal Association of British Dairy Farmers (RABDF) to ask every producer who has been affected to fill out a 2-minute survey each day on their financial losses.

This will allow them to provide a daily report for industry and government on the changing scale of the issue.

The lack of funding is in contrast to the fishing industry, which last week secured £10m to help pay fixed costs such as insurance, equipment hire and port costs.

Defra has announced that dairy processors are to be given additional legislative support to help them move milk supplies between companies without falling foul of normal competition laws.

The rule change will allow rival companies to discuss the flow of goods through the supply chain, but will prohibit them from talking about price.

Ministers said this could include sharing labour and facilities, co-operating to temporarily reduce production or identifying where there is hidden capacity in the supply chain for processing milk into other dairy products such as cheese and butter.

The government had already relaxed rules in this area for products moving specifically to supermarkets and other retailers, but the latest development will allow collaboration in all dairy markets.

RABDF chairman Peter Alvis said: “Friday’s (17 April) announcement by government that the competition rules are being relaxed is a step in helping the industry work together and identifying how surplus milk in the supply chain can be rerouted.

This survey will help that effort by building a clear picture of how many farmers are affected and the best options for dealing with oversupply.”

Mr Alvis added: “If there is still an issue the industry is unable to solve then as a sector, we must be able to demonstrate clearly to government how big the problem is and where the issues lie.”

Dairy UK, one of the umbrella bodies representing processors, together with the AHDB, will now lead work to co-ordinate the hunt for spare processing capacity.

They will also investigate how milk supplies could be temporarily reduced.

Why is this happening?

Production has been running ahead of demand since the government shut down all non-essential businesses, including the food service sector, which includes big milk buyers such as coffee shops and catering firms.

This sector used an estimated 10m litres of milk a week, of which half has been reportedly diverted into increased supplies for retailers, with the remainder spare.

Two weeks ago this led to farmers being forced to dispose of milk as the excess supply saturated the supply chain, sending the spot price plummeting to 5p/litre delivered.

Some analysts believe the worst of the crisis has now passed, with the spot price recovering to 15-16p/litre on Friday (17 April).

Environment secretary George Eustice said: “We’ve heard loud and clear our dairy farmers’ concerns, which is why we are further suspending competition rules law to allow dairy farmers to work together on some of the most pressing challenges they are facing.

“I am also urging farm businesses to access the loans that are available from their bank to support them in this period.”

These include the Coronavirus Business Interruption Loan Scheme, which offers discounted borrowing rates in the first year but is still subject to normal viability tests, meaning it is likely to only be open to businesses that have been profitable in recent financial years.

Step in the right direction

But Dai Miles, Farmers Union of Wales milk and dairy committee chairman, said although increased collaboration in the sector was a welcome step in the right direction, it must be accompanied by a compensated volume reduction scheme.

He said: “Of course, we need a more accurate knowledge of surplus milk, but with that comes the danger of it having a negative effect on the spot prices – which a lot of dairy farmers are dependent on.

“So as welcome as this announcement is, when accompanied by goodwill on the part of companies, there is a risk it will play into the hands of those companies least affected.

“Unless this knowledge is used to implement a compensated volume reduction scheme, it could cause more harm than good.”