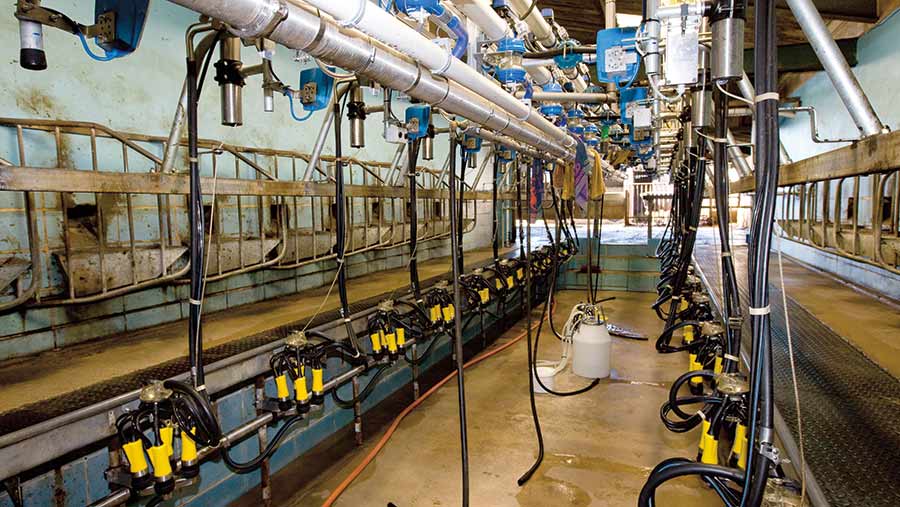 More dairy farmers quit the industry at the start of this year than at any time since March 2007, according to the latest Food Standards Association (FSA) figures.

In total, there were 106 fewer producers registered in England and Wales at the start of February compared with the previous month.

Registrations are administered by the FSA for dairy hygiene inspection purposes,  providing the best guide to overall producer numbers.

In the four months since November 2018, 222 dairy farmers, equating to 2.4% of the industry, have quit the sector.

That figure compares with just 79 producers leaving the industry in the 12 months ending October 2018.

The monthly drop was so dramatic, AHDB Dairy said it was working with the FSA to see if something was distorting the statistics.

An AHDB Dairy spokesperson said the number of dairy farmers in the UK was likely correct, but the increased departure numbers could have been enhanced by producers quitting in previous years without telling the FSA.

The recent introduction of new data protection rules could be a factor if the FSA had “cleaned” its database, effectively catching up with these outgoers,” said the spokesperson.

An NFU spokesperson said the figures, despite needing verification, highlighted a worrying long-term trend and only further highlighted the need for greater transparency in the market.

‘It was like someone died’ – dairy leaver Mike Gorton

Former dairy farmer Mike Gorton said quitting dairy is still the hardest decision he has ever had to make, but three years on he knows it was the right one.

The Cheshire-based producer milked 70 cows until the downturn of 2015, when he was receiving just 15p/litre for his milk with processor First Milk.

“I wasn’t in good mental health. I had had enough. I told myself if things did not pick up by Christmas I would get out.”

Mr Gorton managed to sell his whole dairy operation to a neighbour on a supermarket-aligned contract, meaning that overnight the same milk doubled in value to 30p/litre.

Leaving was like experiencing a death in the family, said Mr Gorton. “You never get over it, but you learn to live with it.

“Father did not speak to me for a number of months, but I think we are OK now,” he added half in jest.

“I think I have been proven right. The dairy cycles are getting bigger and the upturns are getting shorter – there is not enough time for producers to reinvest in their businesses.”

Mr Gorton advised other producers in a similar position not to allow themselves to enter a downward debt spiral and to leave while they can.

“The longer you leave it, the harder it is to get out,” said Mr Gorton.

“In the past four months, 3% of the industry has gone, which is absolutely incredible,” said Mike Houghton, partner at farm business consultant Andersons.

“Whether that trend line carries on or not it is very hard to see.

“Last month suggests a lot of people in the north of England went and in the far West, so it’s people starting to exit from the strong dairy areas, as well as eastern counties and places where cows are a rare breed these days.”

“Whatever happens, we have had over 200 producers gone in the past four months – it has not happened like that before,” added Mr Houghton.

“I thought supply would begin to fall away, but that is not the case at the moment.”

By sector, dairy farming has among the highest levels of farm debt in England, according to 2019 Defra 2017-18 farm business performance figures.

These show 38% of the country’s dairy farms had liabilities of more than £400,000. This compares with just 15% for the cereals sector, 23% for pigs and poultry and just 5% for  for both less-favoured area (LFA) and lowland grazing livestock.

Almost half of all leavers in the February figures were in the north of England, with 49 quitting in total.

The far west and north-west of England respectively saw 24 and 22 producers quit.

Wales had an even spread of leavers across most counties, losing 10 producers in total in February, 0.6% of the nation’s total amount.

Despite the declining dairy numbers, Mark Suthern, the head of agriculture at Barclays bank, said its portfolios in the traditional dairy regions were holding fast.

“Our experience is of those who have invested in their business and in infrastructure and are committed to milk production in the long term,” said Mr Suthern.

“We have seen a small number of enquiries in recent months from those in other sectors like beef and sheep or arable looking to enter dairy production, which is a sign of farmers looking for new opportunities and that the management of the industry is changing,” he added.