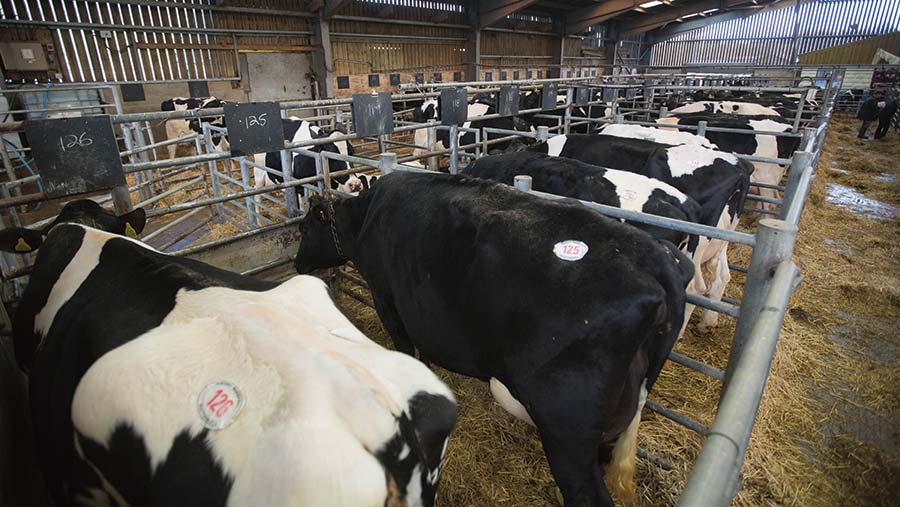 Concerns about feed supplies have led to a rise in dairy dispersal sales across the UK and pulled sales forward from the usual autumn period.

Prices for some commercial dairy cows in milk have fallen by up to £300 a head in a month as producers battling drought conditions slash cow numbers.

See also: Higher dairy returns could be wiped out by drought

Numbers of UK commercial freshly-calved heifers and cows sold at regular markets shot up between May and July by 71% to 760 head and 36% to 837 head, respectively, according to the latest AHDB Dairy figures.

Producers relying mainly on grazing have been looking to streamline herds or get out of milk altogether as the drought decimates forage stocks and input costs soar.

Auctioneers told Farmers Weekly sellers were willing to move animals around the country, to buyers in Scotland and Cumbria to maximise prices.

Dispersal sale numbers were four to six weeks ahead of their usual position, according to auctioneer Dan Hassall of Cheshire-based Hassall Brothers.

“September and October is always busy for dispersal sales, but we have seen a significant correlation between the dry weather and sales booked in earlier than usual,” said Mr Hassall.

In many cases the sales are milking portions as well as whole-herd dispersals.

Despite the situation being finely balanced, Mr Hassall does not foresee a crash in cow prices as the country is already short on both milk and stock.

“Intensive, housed units that have been less affected by the weather are propping up the market by paying decent prices for milky animals with good body condition,” he said.

“It’s the mid-range animals without that condition that have been hit hardest, with prices £200-£300 a head down on where they were four weeks ago.”

GB cull cow prices have plummeted by 19% since early June to 107.8p/kg in the week ending 4 August. The auctioneer said he had seen a significant uplift in the number going to market.

“I can see a second wave of more youngstock coming to market. They are a bit of a luxury at the moment and farmers will begin to question whether they have enough feed for them as well,” Mr Hassall said.

TB restrictions are adding further complications to sales, according to Norton & Brooksbank auctioneer Tom Brooksbank, who said sales are often a race against the clock.

“Ideally [when planning a dispersal] you would have time to pick certain bulls and tweak calving patterns to maximise the value of the herd and get everything shipshape, but you have to act fast now.”

Mr Brooksbank added that he had seen a dramatic change in attitudes among dairy farmers, who had become more nervous in recent months, but said if producers had suitable feed stocks, they should hold on.

“One week of good weather could change the situation massively,” he said.

Concentrate prices have risen by £25/t on average since the start of the year and are likely to be in the £240-£250/t region over the winter, according to AHDB Dairy.

The tipping point for producers to sell cows would be the inability to feed them, said NFU dairy board chairman Michael Oakes.

“There is no surplus of milk anywhere so farmgate prices should improve, but better margins will be wiped out by feed costs.”

Philip Cuerden, managing director of law practice and NFU national legal panel firm Bowcock Cuerden explains what to consider if thinking of getting out of milk

Seven tips to help deal with the dry weather, from Mike Butler of Old Mill