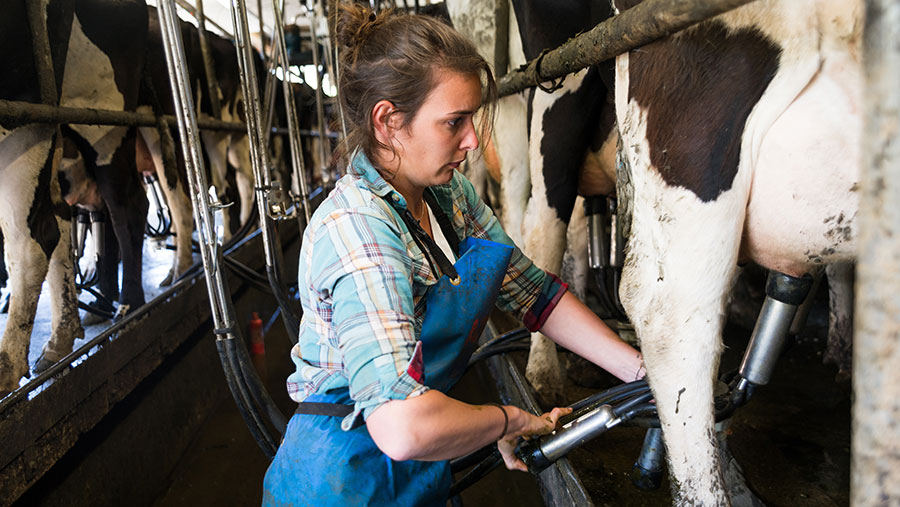 The news that Freshways is aiming to be the first processor to pay its producers 50p/litre, starting in September, has raised eyebrows across the industry this week.

If achieved, the price – for a standard liquid litre of 4% butterfat and 3.3% protein – will be an increase of 5p/litre on the company’s July figure.

Bali Nijjar, managing director at Freshways, said there were many reasons behind the decision, such as farm production costs being unlikely to reduce in the short term, commodity prices being at a level that commands this price, and the spot price for August looking to be about 50p/litre.

Mr Nijjar also said he believed announcing 45p/litre for July set the pace for other processors, and he hoped striving for 50p/litre for September would do the same.

The liquid processor is in the final stages of completing its merger with Medina Dairy, which included taking on 19 of the 20 farmers on Medina contracts.

Since then, Freshways has signed up several more, including the Beacon Hill Producers and those supplying Capital Milk, taking the total to about 180 producers from February 2023.

John Allen, Kite Consulting managing partner, said it was important to balance the news by noting that the September price was not guaranteed and the July rate left Freshways paying about a penny less than the competition.

“They are promising things because they don’t want to lose their farmers,” said Mr Allen. “They are also giving themselves far too much credit for leading the market – Arla leads the market in the UK, not Freshways.”

Arla has announced a 43.44p/litre price for a standard liquid litre for July.

Kite Consulting reported in April that 45-50p/litre would be required if processors wanted to reverse the drop in milk volumes compared with 2021 and the medium-term average.

The milk price:feed price ratio suggests that with the huge increase in feed costs, the “incentive” milk price needed to rise in line to avoid a dearth of volumes later in the year.

Aside from feed, fertiliser prices and availability for the grazing season are key concerns.

“Everybody is going to have to match these increasing milk prices because the market’s so competitive and the spot market’s likely to go very high in September,” said Mr Allen.

“The prices have reached levels that should stimulate growth going into the autumn and because of the seasonality of the market, the milk will come after September.”

Ian Potter, of Ian Potter Marketing Services, agreed that Arla sets the pace in the UK and that Freshways’ announcement may sound better than the reality.

“They have a track record of announcing prices two months ahead, which might make farmers feel good, but the July price is below the vast majority of competitors and they’ve missed out June and August,” he said.

“The spot market is already at 50p/litre, so Freshways may as well pay farmers that. There’s a gap between the price rise and the milk cheque arriving, so producers are still battling the high costs.”

With milk in short supply, there is no incentive for farmers to ramp up production and many will have realised the best option is to stay as they are or cut back a bit, said Mr Potter.

“I’m hoping the milk price will level off soon to a new norm, because losing another processor is a worry.”

Sam Bailey, who supplies Muller and milks 240 Holstein Friesians on a council farm in Staffordshire, said 50p/litre was about where the price needed to be and insisted it was time dairies moved into in the real world.

“It’s about time the job’s made a little easier and we see a decent price for milk with input costs and the cost of living rising, because we can’t pay staff enough as it is.

“I’ve seen more herd dispersals in the past 12 months than in the five years I’ve been milking cows. There’s no milk out there and now they’re having to pay for it.

“Why should farmers have to go to the bank every time they want to invest? It should be within the profits.”

Mr Bailey believes other processors will have to follow Freshways, but said he preferred the security of a marginally lower price with Muller than the uncertainty of sharp price changes from a processor trading on the supply and demand of the liquid market.

He said it would be nice to see 50p/litre for winter with costs going up, such as feed and bedding, and said rather than buying more cows, farmers were more likely to be buying forage, with high fertiliser costs limiting stocks.

The AHDB’s most recent survey of major milk buyers shows that in April 2022 there were about 7,880 dairy producers in Great Britain.

This was a reduction of 160 producers (2%) on the previous year – a slower rate of exit than recorded in the preceding few years, despite the high cost pressures farmers have been under since last summer.

The figures suggest the average volume for each farm is 1.57m litres, level with October 2021 and very slightly up on April 2021.

According to the latest British Cattle Movement Service data release, the GB milking herd totalled 1.64 million head as of 1 April 2022. This is a decline of 1.6% (27,000 head) compared with April 2021, which continues the long-term trend of decline seen in the national herd, says the AHDB.

Source: Milkprices.com for a standard liquid litre of 4% butterfat and 3.3% protein