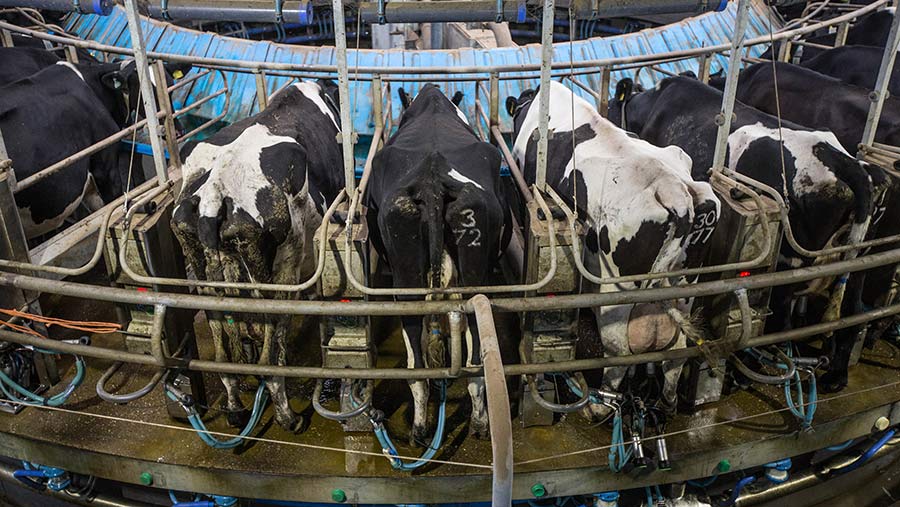 Milk producer profits are predicted to be maintained at current average levels in the year to 31 March 2021. However, the bottom 10% of producers need to change their management practices or they are unlikely to survive the next four or five years.

A new report by accountant Old Mill and the Farm Consultancy Group (FCG) found that dairy farm profits averaged £233 a cow in the year to 31 March 2020, based on an average milk price of 31p/litre.

It projects an average profit of £239 a cow for the 2020-21 year, based on assumptions that milk output will increase by 186 litres a cow, there will be stable cow numbers, milk prices will fall by 0.5p/litre, and costs of production will remain consistent.

The decrease in the milk price reflects falls in the organic market and farmers affected by Covid-19 disruption in spring 2020.

In terms of costs, the report acknowledges that while straw and bedding costs may rise due to lower straw yields, this is likely to be offset by lower fuel and fertiliser prices, alongside stable feed costs.

The figures include a £30,000 labour charge for each partner or director, to reflect unpaid labour,

They also exclude rent, finance, drawings and Basic Payment Scheme income, to make it easier to make comparisons between farms.

However, the report once again highlights the gulf between top- and bottom-performing producers, with the top 10% averaging a profit of 12p/litre compared with a loss of 5.48p/litre for the bottom 10%, with 24% of the sample not breaking even.

“At the current rate, a lot of the bottom 10% could be gone in four to five years’ time unless they change their management decisions,” warned Gerard Finnan, farm consultant with FCG.

Dan Heal of Old Mill said the difference was not related to yields, herd size or system, but that farms in the bottom 10% “just spend too much money.”

For example, top-performing herds were spending about 15-20% of their income on purchased feed, with some at the bottom spending 40-50%.

When comparing the costs of “doing work” – a figure that combines labour, power and machinery costs – in the bottom 10% of herds, there is often high deprecation, high machinery running costs, high contractors’ bills and high labour costs.

The effectiveness and impact of cutting costs was starkly apparent between the top and bottom 10% of producers, said Mr Heal.

“The really key method of driving profitability is a cost-base method. When I say that, I don’t mean go to your contractor and say can I have £5/acre off silaging this year. I’m talking about really looking at costs and thinking ‘if I put a cow track in, do I even need to make the silage?’.

“That’s when you make big changes, rather than tinkering around the edges.

“It is looking into the expenditure of the business and adapting to suit the farm or milk contract. Or making timely investments if they give a return.”

Costs of running the parlour There is a £40 a cow difference between top and bottom operators. If your parlour is costing a lot in repairs, it can be a false economy to keep it going.

Bedding costs There is £20 a cow “win” available for farmers with high bedding costs, so consider a switch from straw to sawdust or sand.

Health and breeding The difference between top and bottom performers is again £20 a cow, with savings possible by moving to a more proactive vet service, involving a vaccination plan rather than treatment.

Cost of doing work If you have an expensive tractor, do you need it and is it pulling its weight? Would you be better off with a contractor, or are there jobs you can take back in-house rather than getting the contractor to do them?