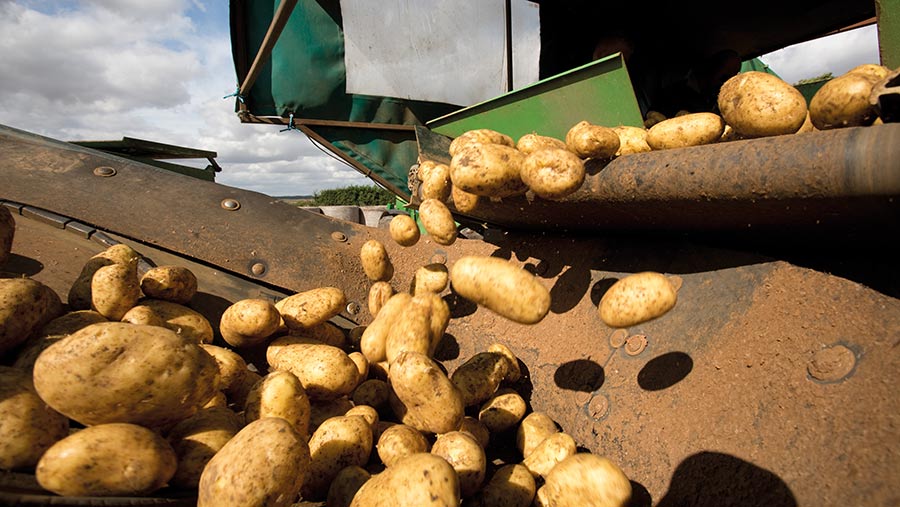 Potatoes and sugar beet share some agronomic challenges but the structural ones differ.

The balance of margins in the potato sector needs addressing, while a whole-rotation costings approach to the beet crop could help grower decision-making.

Many growers will be nursing financial damage or losses from the past two years of potato production.

The impact of Brexit continues, notably reduced availability of imported seed and the lack, and resulting increased cost, of casual labour.

The ever-changing alignment between packer and retailer, largely driven by the latter, is beginning to look unsustainable.

The lack of long-term relationships, while on the face it are of commercial benefit to the retailer, will not help deliver the environmental/sustainability benefits being demanded.

The packers themselves are not making significant margins, and less than some growers, on a margin of turnover basis.

The future of the sector is very much in the hands of the retailers which have to step up to the challenges to retain UK supply, says Mr Blake.

To help their own situation, he advises growers to take a critical approach to land selection and utilisation to improve overall sold yield.

They should also consider the full impact of rented land, factoring in distance, use of nematicides, irrigation charges, land rent and storage cost.

For the first time in almost nine decades a statutory potato levy is unlikely to be part of the potato grower’s budget, following the recent AHDB ballot in which six out of 10 participating growers voted to end it.

Research, on which the AHDB spent 28% of its annual budget, is perhaps likely to be one of the most significant losses to the sector and a government consultation on the activity of the wider AHDB is open until 10 January 2022.

In the meantime, it has recently been announced that the levy will be collected as usual this December, at the current rate of £42.62/ha for growers.

A significant uplift in the sugar beet price for 2022 could help safeguard beet growing on many farms next season.

It appears the NFU has largely prevailed in this year’s negotiations, with a one-year contract of £27/t and uplifts to £25/t for three-year contract holders, subject to committing for a further year.

Following the wet autumn of 2020 and disappointing yields, Andersons’ experience was that growers planned to seriously review their commitments either now or at the end of their three-year contracts, giving rise to uncertainty for British Sugar, says sector author Jamie Mayhew, a farm business consultant with Andersons Eastern.

While this offer appears to have transformed the economics of the crop, it must be borne in mind that an aphid attack could seriously damage the outcome.

Headline prices could be topped up with a premium for growers near factories or by success with the sugar futures-linked contract, which has been opened to all growers for next year.

However, growers can only enter up to 10% of their contract tonnage entitlement for 2022 drilling into the futures contract, which, at the time of writing, the NFU estimates would add 30p/t to the overall average price on today’s market.

The principle of a futures-based contract seems positive, so there is an argument for letting growers enter a greater share of their contract into this option.

The wheat market is often used as a benchmark for the sugar beet price but an alternative break crop may be more appropriate.

Total margin from the rotation, with or without sugar beet, seems to be the most appropriate analysis to undertake when determining the crop’s true worth on farm. For example, late-lifted beet can reduce the following crop’s gross margin, and needs to be factored in.

The next two years could be a watershed as growers grapple with the realities of growing beet without effective insecticide cover as well as the changing economics of enterprises, taking into account inflation and carbon.