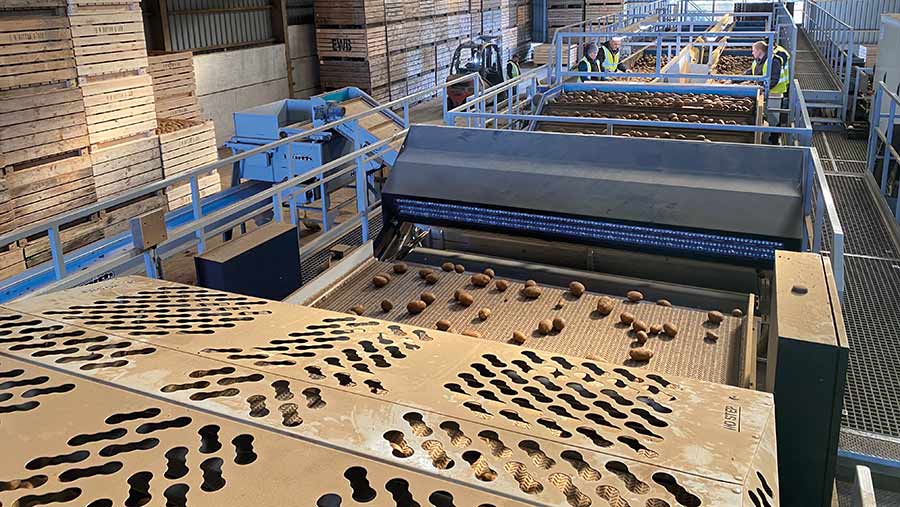 To make itself more resilient to these issues – which are not expected to go away any time soon – Cornish producer EW Button & Son recently invested in a state-of-the-art potato-grading line with an optical sorter.

This has not only optimised labour use, but has also improved yield and made harvest, storage and delivery of the maincrop and salad potatoes much more efficient, which, in turn, has increased profits. 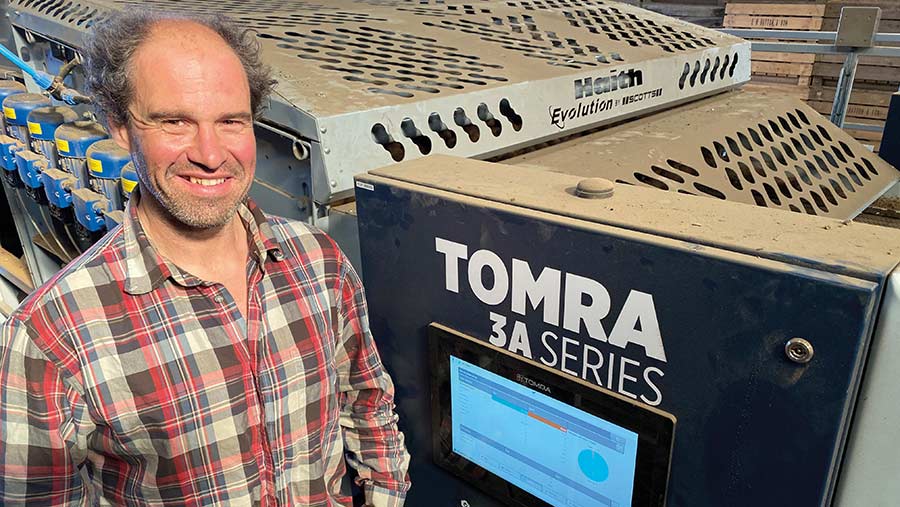 Located at Michaelstow in north Cornwall, the business has expanded its potato enterprise over recent years and now produces some 20,000t annually for packers such as Branston and The Little Spud Company.

This growth – largely driven by a rise in demand for salad potatoes – means there has been pressure to invest in kit to harvest, handle and store its increasing tonnage.

The farm now runs three modern harvesters, including two self-propelled Grimme Varitron 220s and a trailed bunker-type Grimme SV 260, so getting crop lifted and to the grading shed is efficient enough. 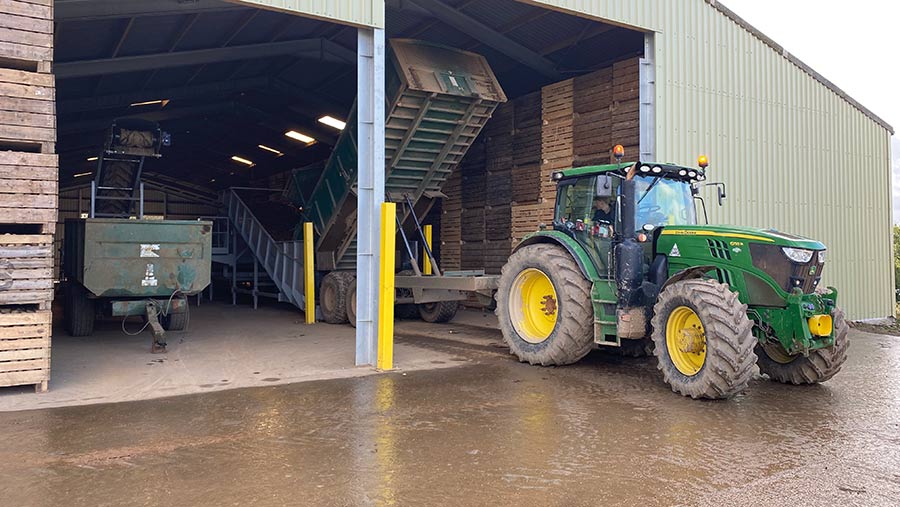 Trailers are backed into the intake area and tip into a 2.4m-wide SupaFlow receiving hopper © Adam Clarke

Cash has also been ploughed into modernising storage, with refrigerated capacity for 65% of its in-spec potatoes over winter allowing much more flexibility on delivery to customers.

Joe Button – the founder’s grandson and now day-to-day manager – tells Farmers Weekly that until this year, the expansion had caused a pinch point in the grading shed, which hadn’t been updated since 2004.

Without the ability to quickly grade into store, the farm was harvesting the whole crop straight into boxes.

These were then either delivered directly to customers for grading or put into store and processed on farm during the winter period, steadily fulfilling orders. 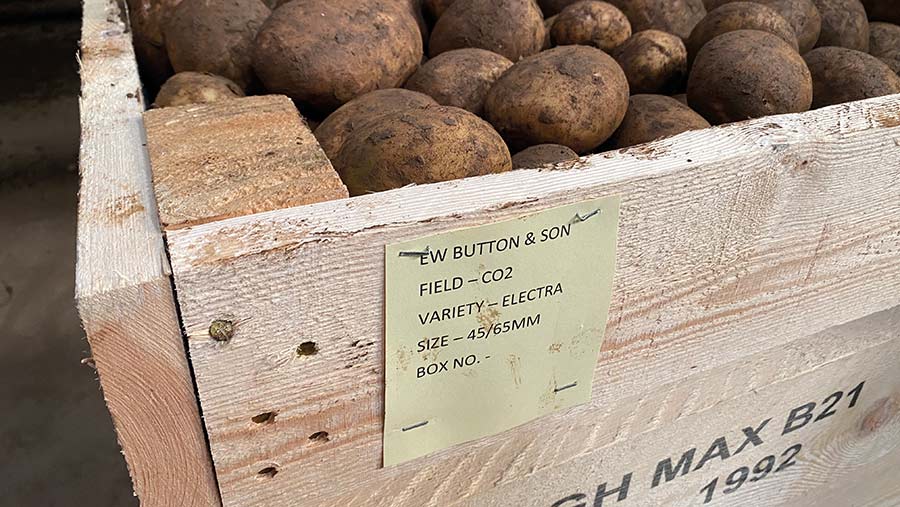 This meant that EW Button & Son was footing additional haulage costs for the proportion of the crop that wouldn’t make packing specification, and an additional revenue stream, albeit small, from selling out grades for stockfeed was also lost.

They also prefer the crop to be delivered stone free, which is a challenge because of the region’s light loam soils having a relatively high small stone content.

With their maincrop varieties, such as Electra, this can be addressed in the field, but it is much more difficult to remove on the harvester when using the narrow 28mm webs that are required for the salad crops.

“When we bought our old line in 2004, the farm was only planting about 60ha of potatoes. With the additional tonnage and changing customer requirements, the business had simply outgrown the old line and we reached a point where we had to do something about it,” explains Mr Button.

A fellow potato grower and friend had installed a new grading line, including a washer, from potato processing, grading and handling specialist Haith.

After a visit to see the new line, Mr Button was so impressed with the build quality of the washer that he immediately set his sights on sourcing a whole new line from the Doncaster- based manufacturer.

Haith conducts a site visit for each customer and to assess various aspects of the potato enterprise, including buildings, soil types, varieties grown and customer requirements.

Harvest, handling and store capacity, and the flow of buildings – basically how produce is shifted in and out of the grading area – are also considered, as are any future expansion plans.

The sorter has reduced the workload for the team of pickers, which has been reduced from six to four © Adam Clarke

Haith’s 3D computer aided design (CAD) engineers then piece together a line of its various components tailored to the customer’s specific needs.

For EW Button & Son, increasing throughput was a key priority, enabling everything to be accurately graded into store during harvest so no floor space is wasted.

The old grader had limitations on its size grading accuracy, so improving performance in this area was essential, too, as was coming up with a means of dealing with stones and green potatoes to further improve the product delivered to the customer, either straight off the farm or after a period of storage.

A final aim was to save on casual labour requirements, if possible. 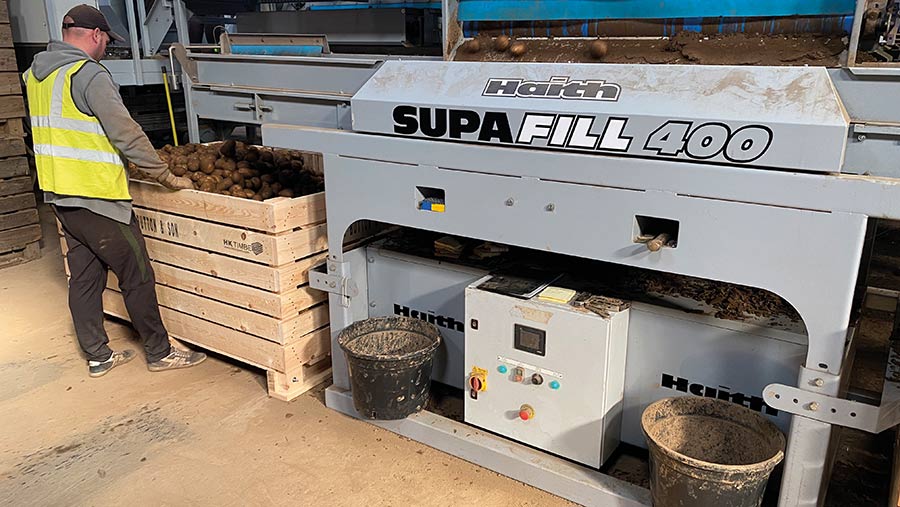 The result is a Haith line that has twice the output of the old system – a 14t trailer-load of salad potatoes that used to take an hour to process is now finished in about 30min.

This is achieved with a 2,400mm-wide SupaFlow receiving hopper, which feeds the crop into an eight-row Evolution separator of the same width for initial cleaning of loose soil, clods and haulm.

The crop then heads through the line’s high-tech pièce de résistance, which is a 2,400mm Tomra 3A optical sorter. This removes greens and any small stones or other foreign objects before it is sent to a manual picking table. 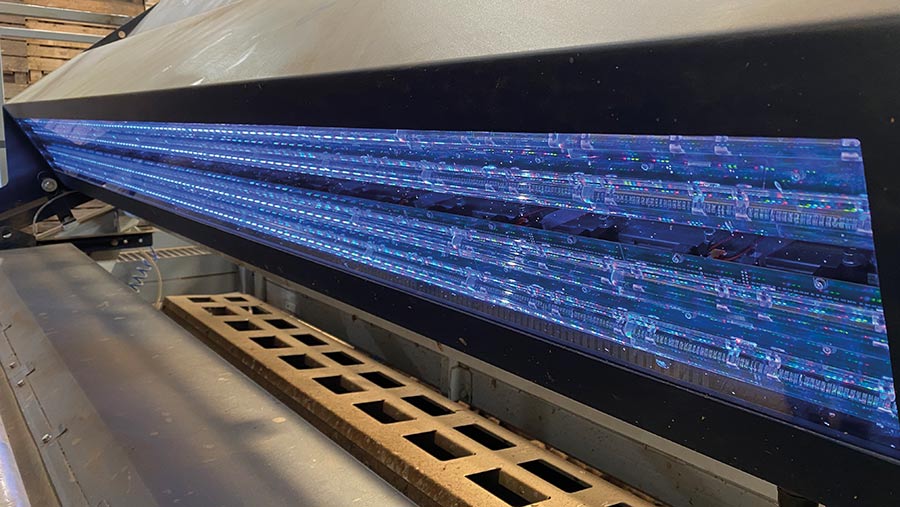 The old line used to require six pickers per shift, but with the optical sorter in place, a team of four is adequate and they don’t have to work as furiously as before in tough conditions.

Mr Button says this allows them to take comfort breaks when required without having to stop the line, and he is confident that if he wanted to run the machine with no pickers at all, he could do so.

The Tomra’s control unit allows the operator to adjust tolerances to greens and foreign objects, with a balance to strike between the accidental loss of healthy tubers and maintaining a decent throughput. 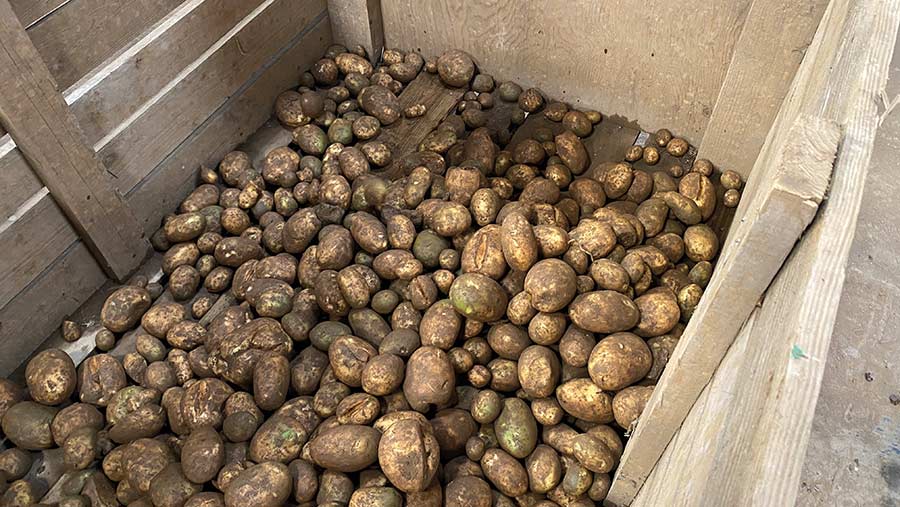 With pickers, he can afford to have tolerances set slightly higher, safe in the knowledge that they will catch any undesirables as they move down the line. However, with no pickers, tolerances could be lowered and although losses might be slightly higher, it would allow the line to continue.

“If you were up against it and had a late-night order to fulfil without the staff, you could certainly do it and the potatoes would pack with no problem at all.”

It should be noted that although the 3A sorter has not removed all pickers – typically sourced from eastern Europe – extra members of support staff are now required to handle the increased output at the end of the line.

One of the criteria to claim the Rural Development Programme for England (RDPE) grant that helped fund the £670,000 investment is to reduce reliance on casual staff and increase opportunities for permanent employment locally, so this has been achieved. 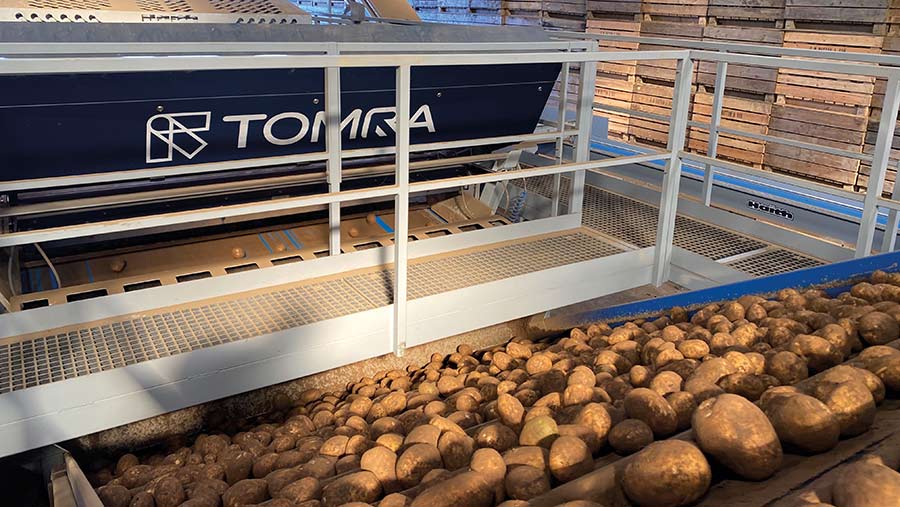 After the picking-off table, the line has eight screen graders with triple agitation, which offer a thorough and accurate size grading process that is central to maximising returns.

Many lines operate with fewer screens and double agitation, which increases the risk of “riddle riders” – particularly when grading varieties that produce long tubers, such as Jazzy.

These are tubers that escape smaller screens and fail to fall into more valuable size fractions as they bounce down the line.

“Both Branston and The Little Spud Company want salad potatoes in the smaller size bands, with sub-35mm and 35-45mm selling for the best money. Above 45mm the price drops off a cliff, so the extended screens help ensure we get paid for our on-spec potatoes.” 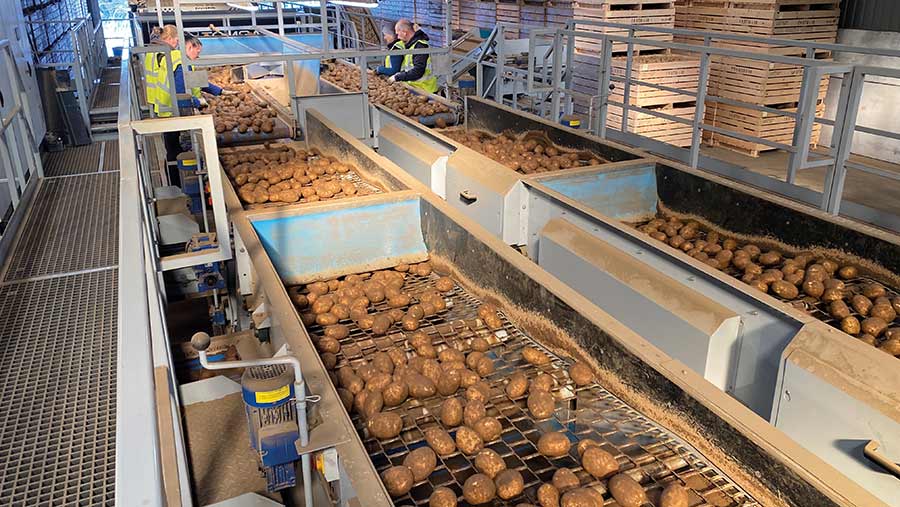 Once graded for size, there are five SupaFill 400 box fillers that keep the forklift operators busy, and a stone and clod roller system is also integrated into the line. This splits stockfeed potatoes from clods and stones to produce a cleaner by-product.

The whole system is encircled by a gantry, which allow safe and easy access for changing grading screens, cleaning and maintenance.

At the time of Farmers Weekly’s visit in mid-October harvest was almost complete, and Mr Button has been very impressed with the new line’s output and increased efficiency.

This has already resulted in tangible financial benefits, with about £10,000 saved in haulage costs because of a cleaner and more accurately graded crop heading off to the packers, with stockfeed remaining in the yard. 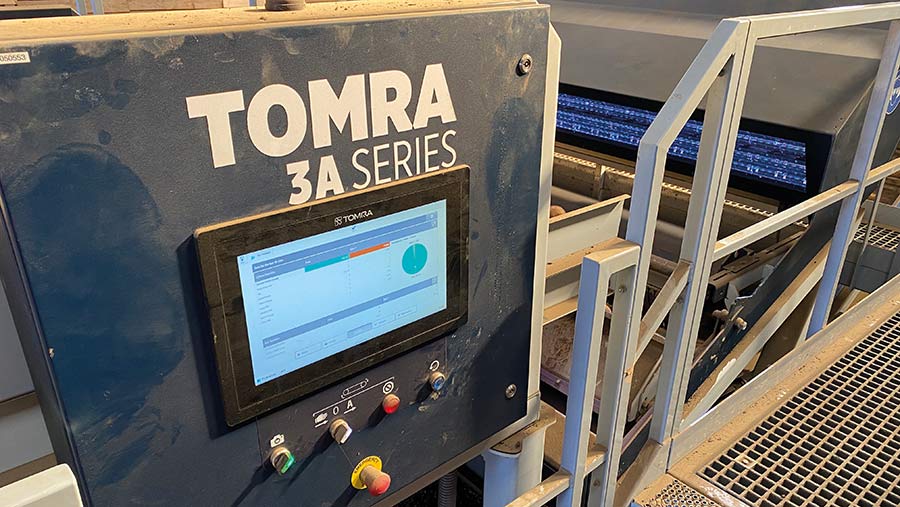 Mr Button says these savings, and the potential for others once the numbers are crunched after all the 2021 crop is delivered, is another key driver behind the investment.

“The potato enterprise is machinery hungry, and you have to invest, but we also need to keep an eye on costs. We now employ staff in the office to do just that.

“We have to make sure all machinery investments pay for themselves through cost savings or increased efficiency, giving the business a return. We were lucky in this case, because we had a 40% grant, which meant it all stacked up.”

If he had the opportunity to start again from scratch, he says he might have opted for slightly wider screen graders, which Haith sells on 300mm increments up to 1,200mm wide. They opted for two 900mm-wide lines.

Arguably, this would have given the crop more space and opportunity to fall through the various grading screens and further increase the number of tubers falling into the more valuable fractions. 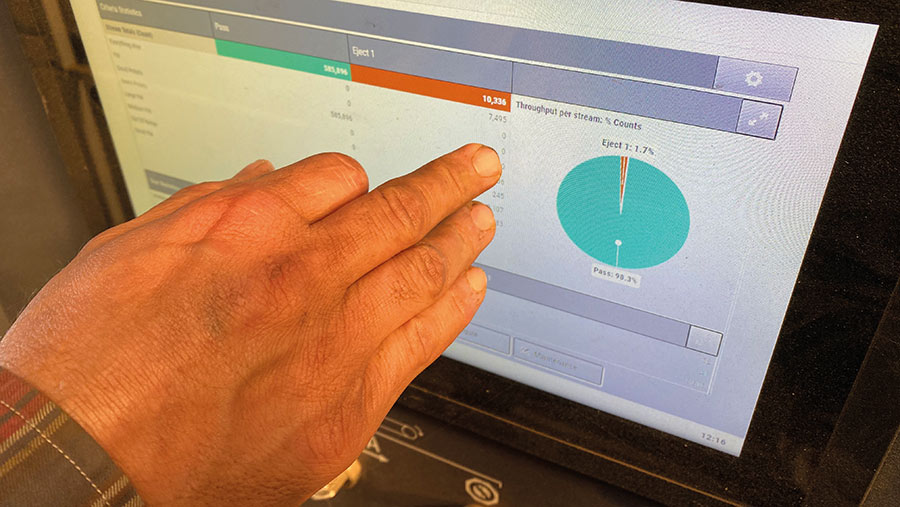 Mr Button adds that support from Haith and Tomra has been exemplary, but he advises any would-be optical sorter buyers to ensure their machine is connected to the internet.

Tomra’s touchscreen control unit enables users to store settings or “recipes” for different varieties or crop conditions and, once set up, is straightforward to use, but he has needed some assistance.

“Remote connection allows Haith’s team in Ireland to access our system and troubleshoot any problems.

“I’m a farmer and not a computer programmer, so to get the most out of the machine you certainly need their support.” 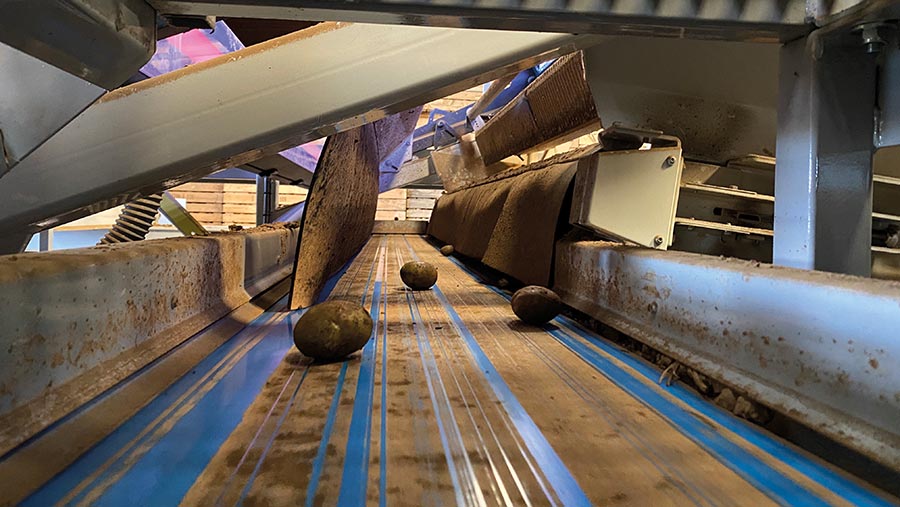 What is an optical sorter and how does it work?

Optical sorters essentially use reflected light to analyse a product that has been singulated and presented to the machine’s viewing area, with applications including food production, waste recycling and mining.

Analysis is done using optical filters to narrow the light reflected from the objects into specific wavelengths, which accentuates the difference between acceptable and rejectable product.

Cameras then receive the reflected light and send the information to be processed by the system’s software, which then instructs a mechanism to remove any unwanted objects.

In potato production, optical sorters have mostly been used in packhouses to grade washed potatoes, but sensor technology and software has advanced to allow processing of dirty potatoes on farms.

This has major advantages for the grower, as it reliably removes foreign objects such as stones, soil clods, rocks, wood, bone, plastic, glass, metal and rubber.

However, unlike previous incarnations of optical sorters such as Tomra’s Field Potato Sorting Machine (FPS), the latest 3A is able to remove green potatoes, too.

Tomra claims the 3A can recover 5-10% of lost yield, while reducing the risk of deductions and lowering storage and haulage costs by only storing in-spec produce.

The 3A system spreads potatoes uniformly onto an in-feed belt and, as the potatoes fall off the end of the belt, they are scanned mid-air by full-width near-infrared and colour vision sensors in the so-called “inspection zone”.

Within milliseconds, any foreign or unwanted material is rejected by intelligent finger ejectors, which flick it onto a separate conveyor.

Good produce continues down the line for further picking off and/or size grading before being loaded into boxes or bulkers. The system can work at throughputs of up to 100t/hour.