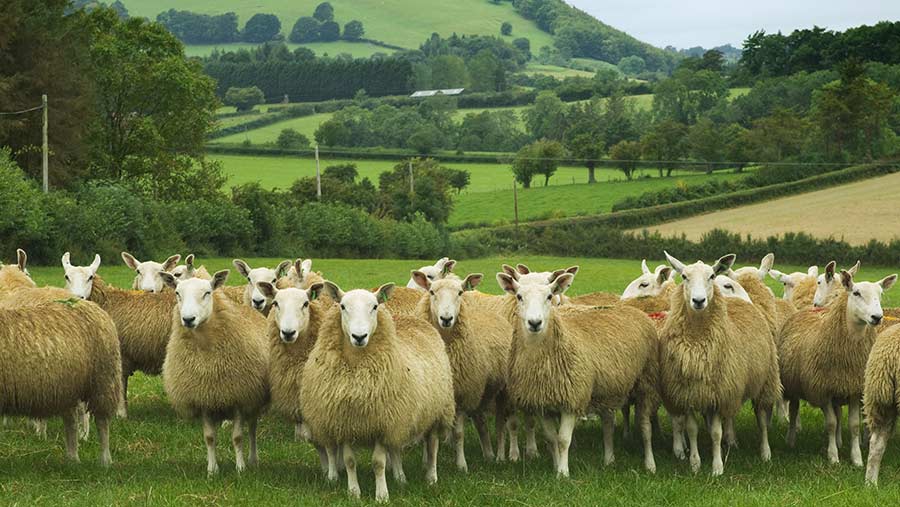 The effect of a weaker pound helped push up farm business incomes (FBI) in 2017-18 across almost all sectors, according to Defra figures.

The figures cover the 12 months to February 2018 and show marked rises for certain sectors, with only the specialist pig producers seeing a decline.

The increases were underpinned by a 13% rise in the value of Basic Payment Scheme payouts, which averaged £31,700.

See also: How a beef farmer is achieving gross margins of £370 a cow

This was due to the weaker pound in September 2017, when the exchange rate for payments was determined.

How is farm business income calculated?

Farm business income (FBI) represents the financial return to all unpaid labour (farmers and spouses, non-principal partners and their spouses and family workers) and on all their capital invested in the farm business, including land and buildings.

Incomes rose by 49% to average £64,200 on cereal farms. This was largely down to better wheat and barley prices, driven by a weaker sterling, and higher yields achieved in the favourable conditions of 2017.

The combination meant cereal growers achieved a positive average return from agriculture of £1,600 for the first time since 2012-13.

This was pegged back by a 1% increase in fixed costs and a 4% rise in variable costs, due mainly to more expensive seed and contracting prices.

Overall, FBI was bolstered by diversified activities and BPS, which rose by 12% on cereal farms.

The hike in output was down to increased areas, yields and prices for wheat, oilseed rape and sugar beet production.

However, potato growers saw a fall in crop values due to oversupply. Costs were considerably higher, with variable costs up 14% due to increased areas and fixed costs up by 9%.

The fixed cost rises were due to regular labour, general farming and property costs. Despite this cost increase, average income from farming jumped to £16,000 from £6,000 a year earlier. BPS payments went up by 15%, influenced by a larger average farm area.

But the overall figure masks a wide variation in milk prices and therefore incomes, with some farmers receiving considerably more or less than the average.

The sector was also hit by considerable price hikes for purchased feed and costs relating to increased cow numbers.

Support payments accounted for one-quarter of income after an increase of 13% due to the favourable exchange rate.

Average income increased by 36% to £21,900 on lowland grazing farms where cattle output was the main revenue source for farming activities.

However, the extra output failed to generate a positive return for farming activities on the average lowland grazing farms.

Output from diversification rose by 28% – primarily due to increases in food processing, retailing and building rental – with BPS income up by 7% compared with a year earlier.

Output rose by 7% on the back of increased agricultural production, agri-environment schemes and a 13% rise in the BPS income.

Sheep and cattle output were both greater than a year earlier, with finished lamb and beef prices up on 2016-17. However, the extra cost of purchased feed and fodder more than offset the increased output.

The sector saw a dramatic fall of 46% in FBI to an average of £31,300. Pig revenue increased by 8% in 2017-18 as lower throughput resulted in an increased finished pig price.

However, there was a considerable fall in the closing valuation as prices and pig numbers were lower than recorded at the beginning of the year.

When accounted for against the previous year, where the opposite effect had been seen, the large change in the difference between opening and closing stocks offset the increased output.

This was compounded by a 3% rise in variable and fixed costs, driven by higher prices for purchased feed and fodder, along with a hike in land and property costs.

The average BPS payment was lower than in 2016-17, reflecting a reduction in the average size of pig farms within the sample.