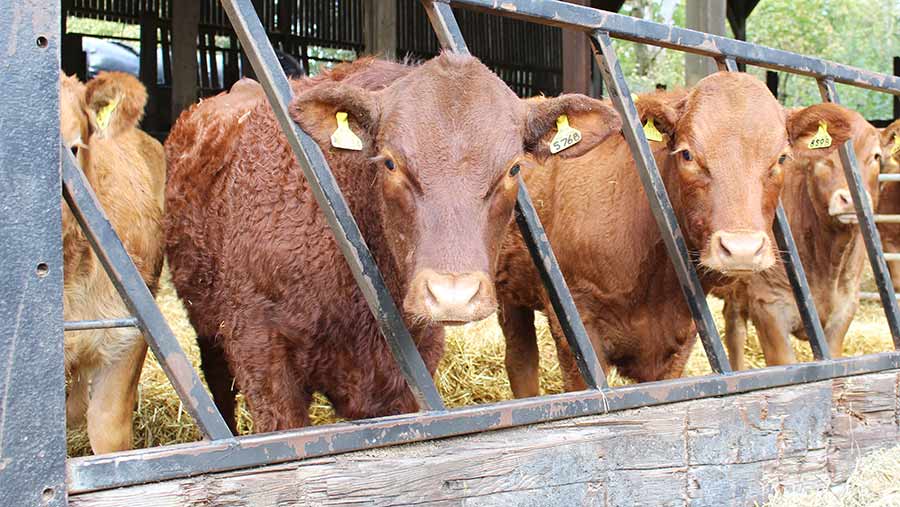 Running a profitable, low-cost suckler beef business is no mean feat, with AHDB Farmbench figures suggesting the middle 50% of producers are making a gross profit per cow put to the bull of £290.75.

However, farm manager Bevis Jordan, Mainsrigg Farm, Whitfield, Hexham, is edging towards the top 25% of suckler producers, with a gross margin per cow of £370 – something he puts down predominately to his focus on calving ease.

The herd consists of 125 medium-sized Saler cross cattle with about 25 heifers kept as replacements each year.

See also: How a beef farmer is set to lift gross margins by 30%

The top 10% of cows are bred to a Saler bull and the remainder with Limousin stock bulls.

Almost 90% (86%) of cows calve within a nine-week block, 93% of calves born are weaned and all replacement heifers are calving between 22-24 months.

He attributes such success to calving ease, as easier-calving cows are quicker to get back in calf, meaning fewer barren animals. Less traumatic births also allow calves to thrive straight away as they are up and suckling and getting the vital colostrum they need.

Calving ease is determined by a number of factors including:

Mr Jordan pays close attention to detail to ensure he is selecting the right animals to breed from, calves are not too big when they are born, and cows not overfat. 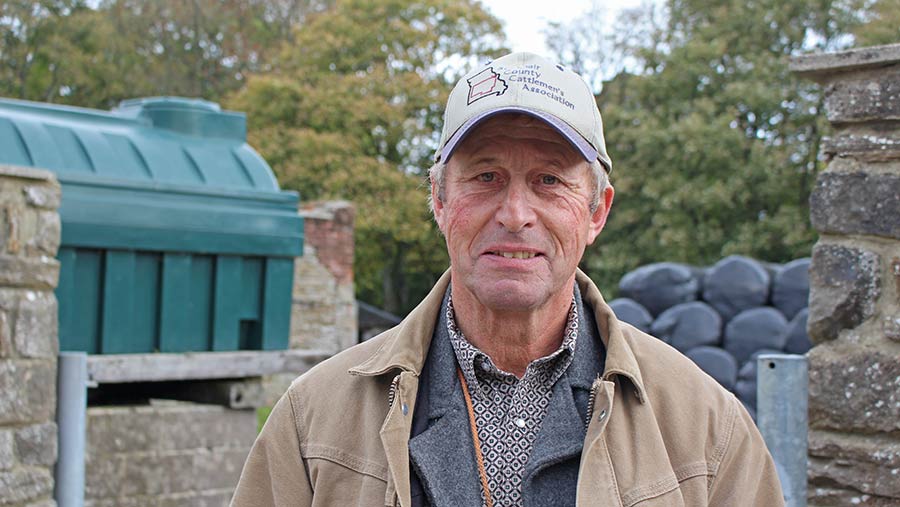 In the past year, Mr Jordan has not had to assist any calvings and puts this down in part to the annual pelvic area measuring of potential replacement heifers to ensure they are fit to calve themselves.

He first started pelvic scoring in 2016 after seeing it being used in the US. Before this, between 2010-2016, he had four caesareans as well as four assisted births.

He selects a cohort of heifers to measure based on their mother’s history, their shape and temperament. His vet, Karl Collins at Old Stone Vets, then measures their pelvis between the ages of 10 and 15 months old, and any with a small pelvis are not kept for replacements.

This has reduced calving difficulties to practically zero, with a single assisted calving in 2017.

Before they started pelvic scoring heifers in 2016 they set a baseline pelvic size for the breed, which was 132 sq cm at 12 months of age. This was based on figures from the US that predicts native breeds have a pelvis that grows at 8 sq cm a month and continental breeds at 10 sq cm.

For a Saler x Limousin, they settled in the middle at 9 sq cm for the monthly growth. So a 14-month-old heifer would be expected to have a pelvic size of 150 sq cm or bigger.

Speaking at a National Beef Association farm walk last week (17 October), Mr Collins said: “You’ve got to be ruthless and get rid of poor scorers even if that heifer looks great.

Calves from difficult births are four times more likely to be born dead or die within 24 hours. Cows are then slower to come into heat, get back in calf, so you then have a longer calving interval and barren rate. 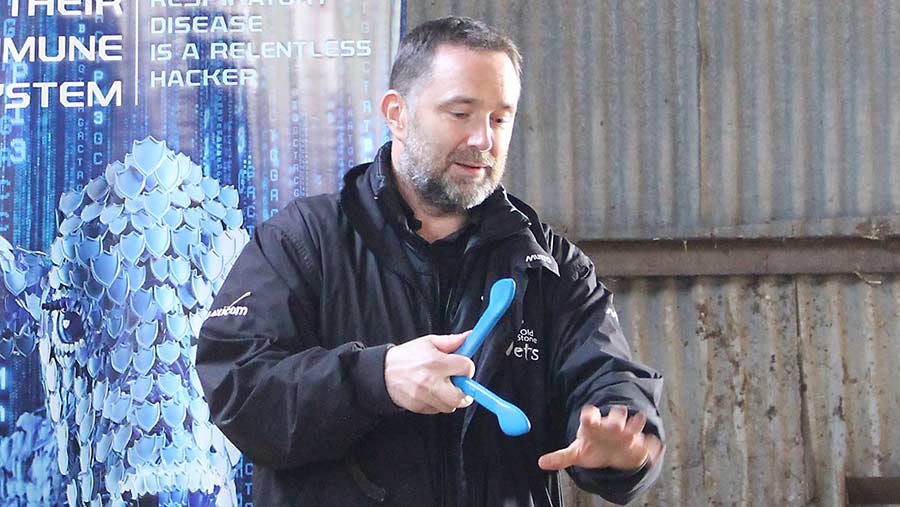 “You also have higher vet costs and labour costs. Occasional problems are unavoidable, but careful management and genetics will help improve calf survival,” he said.

The Saler was introduced to the farm 15 years ago when Mr Jordan changed from buying in replacements of mixed breeds to breeding his own.

The Saler was selected due to its maternal ability, milkiness, ease of calving and ability to utilise rough grazing. Ease of calving EBVs and 200- and 400-days growth rates are something Mr Bevis looks at when buying new bulls.

He currently has one Saler bull and three Limousin bulls, with all cows served naturally. Bulls are turned out with the cows in May and run with them all summer before being housed in the autumn.

Mr Jordan said: “When we look back at the data we find cows tend to calve on roughly the same date each year. Any scanning late or not in calf are sold. We often have cows lasting in the herd until they are 16 years old.”

His Saler bull was bought from breeder Terrance Pye of the Rigel herd who has focused on breeding easy-calving cows. Mr Pye said: “We have been weighing cattle a long time and recording birth weights and measuring the pelvic area.

The breed now has good birth weight EBVs and growth rates. The information is only a guide but it’s heading in the right direction.”

Cows calve down between February and April and are housed until May. They are fed throughout the winter on silage and straw plus ad-lib minerals formulated to compliment the silage analysis. This year’s silage had a dry matter of 29.76%, ME 10.46% and sugar content of 34.59g/kg.

“The diet is very basic; these cows don’t receive any pampering. In-calf heifer replacements are also fed ad-lib silage and then receive 2kg of a beef nut each day post-calving until they are turned out in May to ensure steady growth.

“We don’t want to overfeed the cows as this will cause calving difficulties if they are fat and the calves are too big.”

Cows and heifers are turned out to rough grazing with their calves in May. They are rotationally grazed on the land, which rises to 1,000ft.

Mr Jordan added: “We don’t measure the grass covers, but when the cows are looking restless and the grass is getting down, we move them on to fresh grazing. We apply a little fertiliser to the ground each year.”

Calves are weaned between six and seven months and are then sold through Hexham Mart. 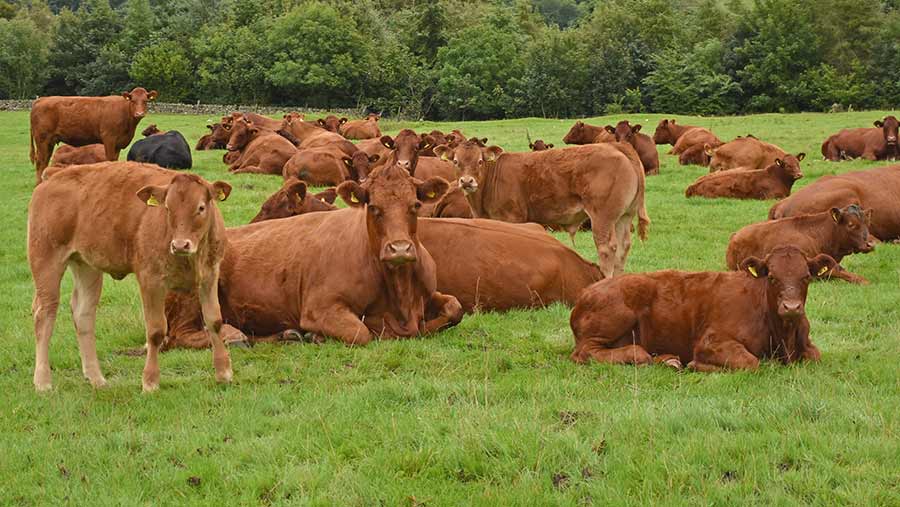 Housing is also key. Over the years Mr Jordan has improved the farm’s traditional housing, removing Yorkshire boarding and replacing traditional doors with gates to help improve ventilation, as well as building a modern purpose-built shed and handling system.

He does not vaccinate for pneumonia and rarely sees any issues in his herd.