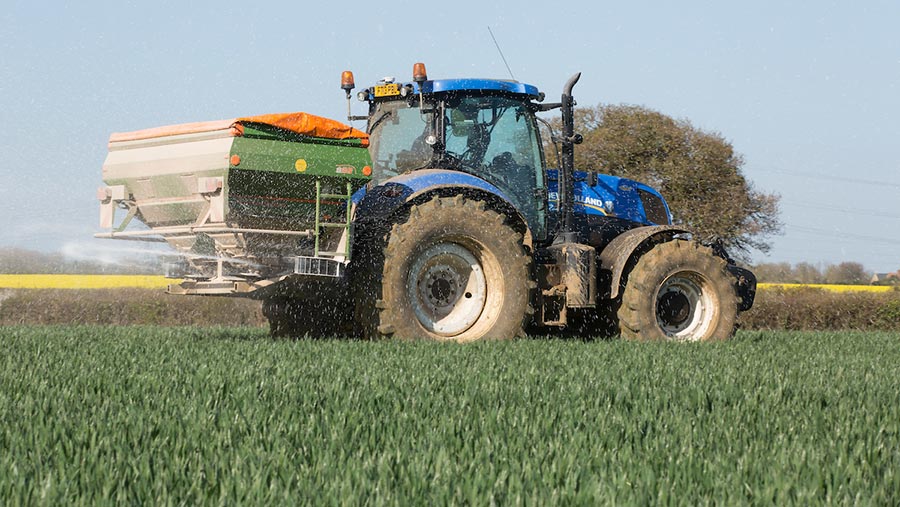 The cold, dry spring is starting to put pressure on nitrogen prices, as first main dressings are only now being applied in many areas.

While still priced far higher than it was a few months ago, prices have slipped by a few pounds a tonne in the past couple of weeks, putting UK-manufactured ammonium nitrate (AN) on to farm at £275-£280/t for full loads in April on normal payment terms.

Imported AN is about £15/t cheaper than this in most areas, although in some the gap has narrowed to about £10/t.

Supply is plentiful but some merchants reported long delivery times for UK-manufactured product.

Urea is generally costing £302-£312/t – this is still good value compared to AN, merchants point out, and those closest to ports will get the keenest prices.

However, with more patchy supply here and there, it can be priced at up to £327/t for April.

With just a three- or four-week window left to apply urea and no useful rain forecast before the end of this month for most regions, some growers have switched to AN over urea to reduce the risk of product ending up sitting on the ground in continued dry weather and volatilisation resulting.

While there is no global supply issue, UK importers are reluctant to commit to new cargoes at elevated prices as this would run the risk of being left with these at the end of the season, so supply is a bit tighter in some areas than others.

There is talk that price could ease in the summer.

Grassland fertiliser demand is slow, and while the rise in phosphate price had pushed up blends too, the lack of orders was beginning to show in a slightly weakening market, said traders.

Speculation has turned to the likely level of new-season urea pricing – current global market prices would put it in the region of £270-£280/t on-farm in the autumn, although no prices are available yet.

Last year’s early offers kicked off in the £210/t region.