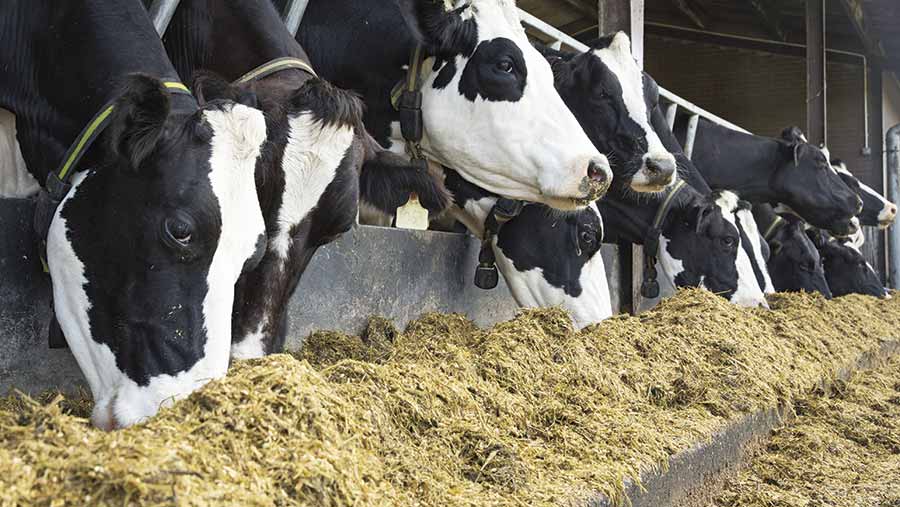 Fodder prices are reaching record levels across the UK as livestock farmers continue to pay the price of last summer’s exceptionally dry weather.

A sale of hay and straw conducted by Midlands auctioneers Howkins and Harrison on Tuesday (8 January) saw ex-farm prices of round bale hay reach £49/bale and big square bales (2.4×1.2×0.9m) peak at £76/bale.

Auctioneer Stuart Long said prices for hay, haylage and silage were the most expensive he had ever seen and had risen about 15% since before Christmas as livery yards competed with farmers to secure stocks to see out the winter.

“I think a lot of people have used a lot of what they have got and they are buying as they need it,” he said.

Some additional supplies are coming to the market through farmers who would ordinarily have used all their forage themselves, but are selling part of it and switching to feeding straw to capitalise on the high prices.

Sugar and fodder beet was also sold at £35/t and £36/t respectively.

High prices were also seen at the Goostrey Produce Auction in Cheshire on Monday (7 January), where square bale hay averaged £166/t, up from £160/t before Christmas, but back from £185/t on 31 December.

There is a small amount of relief for livestock producers as straw prices continue to decline from their peak in August 2018, with reports of large amounts of wheat straw still available across the country.

The price of straw rose sharply during the first half of 2018 after the Beast from the East delayed livestock turnout, clearing barns of straw around the country, prompting more arable farmers to bale rather than chop straw at harvest.

They were also aided by the prolonged dry spell during summer allowing plenty of time for fields to be cleared ahead of drilling.

James Baxter, who farms near Wellsborough in Leicestershire, was selling wheat and oilseed rape straw and said prices were now below what he had been able to sell it off the field.

The prices are likely to mean a “bleak” end to the winter for many dairy farmers who are running short of forage after cutting lighter crops last season, according to NFU Cymru milk board chairman Gareth Richards.

“It is a big, big concern as milk prices have been dropping, so that is compounding the issue,” he said, noting that even farmers who had thought they would have enough at the beginning of the winter are already finding stocks depleting faster than expected.

Dairy farmer Johnjo Roberts, who runs an 800-cow spring block-calving dairy herd in Anglesey, said farmers who need forage must look beyond buying hay if they want to cut the price of rations this winter.

He is buying in barley straw for feeding young- and drystock at about £90/t delivered and supplementing it with a palm kernel-based ration, with the two combined meeting dry matter and energy requirements for a lower price than hay.